Miller, who famously scored eight points in the final nine seconds of a playoff game to help the Pacers beat the Knicks in 1995, delivered another playoffs thrashing to the Knicks. After the Brooklyn Nets ruled Simmons (back) out of Game 4 of their series against the Celtics, Miller, a TNT analyst, used Twitter instead of his 3-point shot to convey a message. 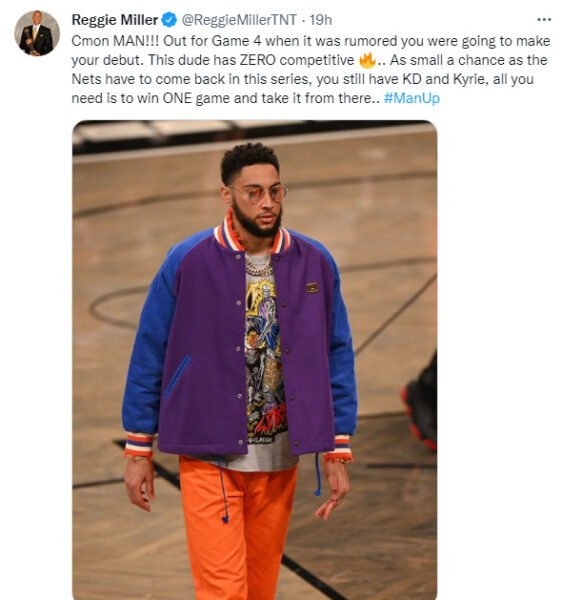 With the Nets on the edge of elimination, Miller wrote, “C’mon MAN!!!” “You were out for Game 4 when it was rumored you’d make your debut. This dude has ZERO [fire emoji] competitiveness.”

Simmons, on the other hand, was not given the same benefit of the doubt. Perhaps he used all of his goodwill by forcing himself off the 76ers.

“As small a chance as the Nets have to come back in this series,” Miller, an NBA Hall of Famer, wrote, “you still have KD [Kevin Durant] and Kyrie [Irving], all you need is to win ONE game and take it from there. #ManUp”

Simmons was acquired by the Nets as part of the James Harden return trade. Simmons, on the other hand, has yet to play for either team this season due to a herniated disc in his back. With one more loss against the Celtics, the Nets would be eliminated, and NBA clubs are 0-143 in series after losing the first three games.

This piece was written by Staff Writer on April 25, 2022. It originally appeared in DrewBerquist.com and is used by permission.

*I am making $92 an hour working from home. i was greatly surprised at the same time as my neighbour advised me she changed into averaging $ninety five however I see the way it works now. I experience mass freedom now that I’m my non-public boss.
that is what I do….. http://www.incomehd.com