I was told plotting a coup was bad...

Over the past two weeks, following the invasion into Ukraine by Russia, the Biden administration has taken a rather strong stance to supposedly defending freedom and democracy. Standing with Ukraine, the Biden administration and Democrats have proposed sending millions of dollars worth of aid, weapons, and ammunition to help the soldiers on the front lines. But while Joe Biden gave speeches on the importance of standing up for democracy, in 2014, he played a significant role in promoting a coup in Ukraine.

Currently serving as Under Secretary of State for Political Affairs to the Biden administration, Victoria Nuland has spent a fair amount of time not only in Ukraine but pushing an agenda that apparently started back in 2014. In the video below, Democracy Now’s Amy Goodman and Juan González detailed how Nuland, under former President Barack Obama, said, “Fuck the EU.” It should be noted that along with working with Biden, Nuland also worked with the State Department during the Obama administration as well.

For those who might be wondering, Nuland’s words against the EU meant criticizing an organization made up of 27 European countries that govern and support the economy and security policies. Still, Nuland would travel to Ukraine during 2014 where she famously handed out cakes to protesters in Kiev. 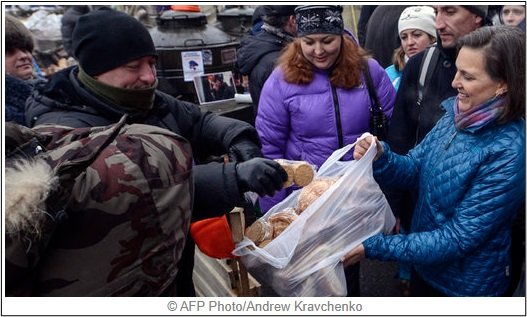 At the same time, Nuland was speaking with Jeffery Pyatt about picking a candidate of the opposition to run for the post of Prime Minister of Ukraine. Selecting Arseniy Yatsenyuk, Nuland added, “Biden and I said probably tomorrow for an atta-boy and to get the deets to stick. So Biden’s willing.”

While a bombshell of information, it was just a small clip of the entire segment diving into the Ukraine crisis and how former Vice President Biden played a significant part in a potential coup.

This piece was written by Zach Heilman on March 9, 2022. It originally appeared in RedVoiceMedia.com and is used by permission.

Biden is so up to his ears in this, it’s pathetic. Investigate now.