America-Hating Has Been QB Returns to Football

Just When You Thought The Kneeling Fad was Over

Colin Kaepernick will be back on a football field shortly, though he won’t be taking any plays. The former 49er and full-time anti-American will act as the “honorary captain” of the University of Michigan spring game on Saturday at 12:00 p.m. EST.

In San Francisco, Kaepernick and current Michigan coach Jim Harbaugh shared a sideline for four seasons, appearing in 48 games together. On Saturday, they’ll do it again, some 2,400 miles east.

Pictures of Kaepernick in a personalized No. 7 Wolverines jersey, posing alongside Harbaugh, quarterback Cade McNamara, and other Michigan players, who were all taking a knee, were included in the UM release. 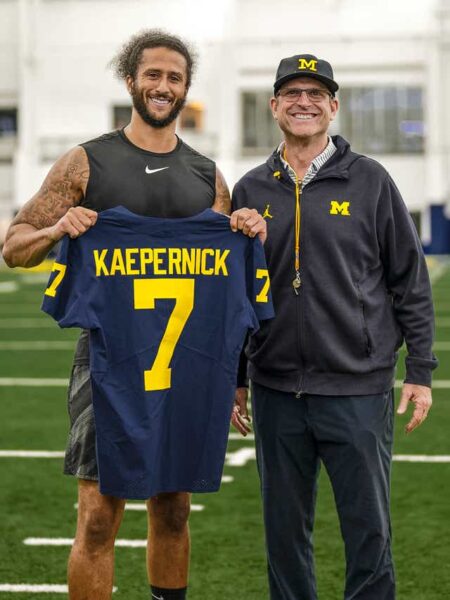 Kaepernick’s desperation tour continues with a stop in Ann Arbor. Despite the fact that he is no longer eligible for college football, he is clearly eyeing a return to the NFL. He posted a video of himself working out on social media earlier this month with the message “still working.”

Kaepernick has also reached out to Pete Carroll, the coach of the Seattle Seahawks, with the aim of getting a workout with the team. Carroll recently told the media that his meetings with Kap “have not moved from the early connection that we made.”

To now, his social media publicity tour has yielded just the role of “pseudo-ball boy” for the Wolverines’ intra-squad scrimmage.

The choice to recognize Kaepernick will probably spark some controversy among Michigan supporters. However, teaming up with Kaepernick gives the Wolverines a chance to divert focus away from their Orange Bowl humiliation at the hands of Georgia.

This piece was written by Staff Writer on March 31, 2022. It originally appeared in DrewBerquist.com and is used by permission.

It’s an insult to military and vets and all loyal American football fans!! Why stir this up again when it seems we have enough going on with becoming energy dependent AGAIN, gasoline and groceries that the unimportant little guys can no longer afford, suffering the consequences of a president who basically told Putin “if the size of your incursion into a sovereign nation is not too big, maybe we can step back from that” – and resulting in thousands of deaths including indiscriminate killing of moms with their children and old people trying to get to safety and a nation whose cities have been pretty much razed! In addition they immediately established an open border policy which was done not by congress who we elect for that sort of thing but one of over 50 Executive Orders used by this administration from day one and as quickly as possible who has ruled like an Executive Ruler! The football thing seemed to have been resolved as few still involved themselves in disrespecting their country, and now they want to bring it to a boil once again? SHAME!!!

The problem for sports, even at the collegiate level and especially at the top tier competitors, the fans are not going to be the usual wokey crowd. These are going to be a lot of people who pay a lot, tons, of money to attend the games and the functions and if their kids go to the school they are getting raped by the costs to go there as well for maybe, hopefully, some useful knowledge, can’t be sure anymore. Many are small business owners who make tough decisions regarding their futures 7 days a week basically 24 hours a day. This is an outlet for them and to bring in some entitled brat who yah, he was a pro quarterback, but not a big winner who didn’t last long and who is a whiner, will not be pleasing to them. They are not racist, they are not sexist, they don’t care about your alphabet status and really they don’t want to hear about it. They support college ball with their hard earned money and they come to have a good time not have some self-righteous jerk tell them they are this or that. Has Kaepernick given all of his away, I don’t think so, so until he does, who cares, he’s not really serious except about publicity and making more for him. He is the worst of the entitled class, for some reason having been coddled his whole life he thinks he is oppressed and deserves it all and wants yours. And Harbaugh again proves, he, really isn’t major league because he hasn’t a clue or he’s sucking up to the admin.