The House Of Orange And Its Subjects

Ways to irritate the established orthodoxy.

As a fellow Floridian who always strives for the George Hamilton deep mahogany look, I’ve never considered Donald Trump’s complexion orange. More like a burnished copper that could easily be mistaken for Tang.

But the tag stuck and I always wondered why during the four years of his administration no one ever made a House of Orange joke. The likely reason is that most of the press are badly educated children and have no idea how the term applies to both the British and Dutch royal houses. So, the term works. If only for the purposes of this screed.

As such, the House of Orange and its courtiers must feel highly indignant these days over the latitude being granted recent agitators for political violence. Most readers of this column know I carry no brief for the former president. I hope he doesn’t run in 2024. If he does, hope he loses in the primaries. If he wins in the primaries, I’ll vote for him for president for the third time. I digress.

Trump, as opposed to Maxine Waters, has never called for political violence. He came right up to the edge on January 6th, but never outright said it. Waters says it all time. Yet when Trump made his infamous speech and a mob attacked the Capitol it was allegedly the end of life as we know it. Guess what? We’re still here.

Waters calls for violence against Republicans, white people, cops, and tries to coerce a jury by the threat of violence. The country yawns and moves on. If I was a Trump guy I’d want payback. Here are some pithy suggestions.

The actual House of Orange in WWII, in exile in London because Holland was occupied by the Germans, had an effective underground organization. They wore these as Resistance armbands. 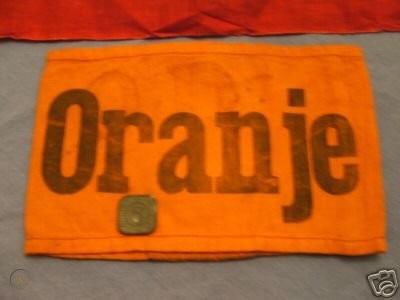 They also started painting large orange versions of the letter V, for victory, all over the country. Our House of Orange should tell its subjects to counter BLM and Antifa graffiti with a zillion gigantic spray painted orange V symbols on anything that has the stench of Democrat or Biden upon it. Imagine driving past the Democrat Party headquarters in Minneapolis and seeing a huuuge V on the door? Yeah, that.

Orangists should also, in homage to those who favor us with their musical selections at stoplights, put together a playlist of the most non-PC country music known to man, Toby Keith and the like, and drive through upscale neighborhoods that went for Biden with Toby singing at full blast. That oughta really tick them off and ruin their Chardonnay-fueled weekend gatherings.

If the left gets to loot, burn, and destroy downtown areas we should at least shove back with grafitti and psyops. They’ve gotten away with too much for too long. The House of Orange should do something about it.

This piece was written by David Kamioner on April 23, 2021. It originally appeared in SteveGruber.com and is used by permission.

Read more at SteveGruber.com:
How Close To The Brink Are We?
The Derek Chauvin Jury Had No Choice on The Verdict They Chose
George W. Bush Is A Democrat

Trey Gowdy Predicts Democrats Will Lose The House Because Of Biden