It wasn't from police actions.

There is myriad amount of misinformation in the media regarding the death of George Floyd. Tucker Carlson set the record straight on Thursday.

Carlson: “Jury selection has begun in the murder trial of Derek Chauvin. Chauvin is one of the officers who has been accused of murdering George Floyd in Minneapolis last Memorial Day. On one level, the trial is a local crime story, one of many unfolding right now. But of course, it’s also incalculably more than that. The death of George Floyd changed the United States, profoundly and forever. George Floyd, we were told, wasn’t simply an individual. He was every African-American in this country. Derek Chauvin wasn’t just a cop. He was the physical embodiment of America’s institutions. We were told that when Chauvin murdered George Floyd, he was doing to one man what our country has done to all African- Americans. Many people told us this.”

Joe Biden: “I just want to say a few words about the horrific killing of George Floyd in Minnesota … It sends a very clear message to the Black community and Black lives that are under threat every single day … They speak to a nation where too often just the color of your skin puts your life at risk … George Floyd’s last words spoke to a nation where the color of your skin dictates the safety of you and your future … I’m a white man. I think I understand. But I can’t feel it.”

However, the Medical Examiner said… 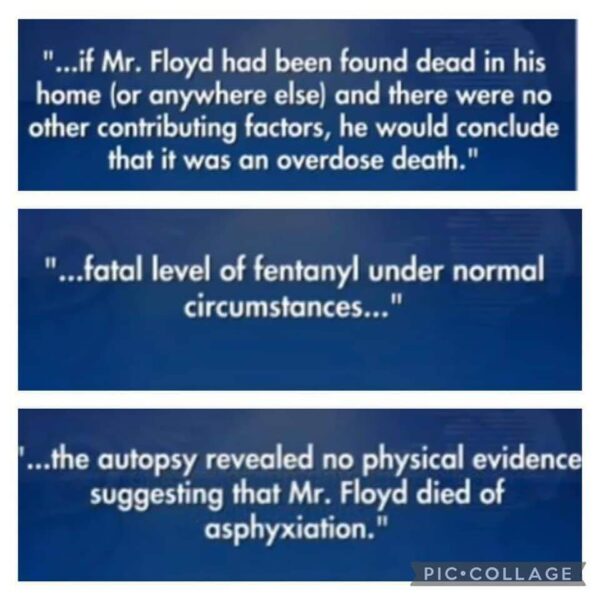 George Floyd had multiple autopsies performed and they all concluded the same: he did not die from compression to his throat. He was a drug addict who had enough drugs in him to overdose.

The facts are that Derek Chauvin did not cause his death.

Carlson continued, “George Floyd was murdered because he was Black. That’s what they told us. They demanded that we believe that, and if you doubted it in any way, if you had any questions about the facts of the case, then you were effectively as guilty as the racist cop…That question matters deeply, because Floyd’s death has been used to reshape how we live in this country. Because he died, we have something called ‘equity.’ Under the pretext of equity, our leaders have enshrined open racism in nearly all of our institutions, from corporate hiring quotas to woke kindergarten lesson plans. Americans have been told that George Floyd’s death was a racist murder, and they’re responsible for it.” Group responsibility, a memorable concept from 1930s Germany.

“In fact, the medical examiner found that George Floyd’s heart was diseased, and on Memorial Day it finally gave way. According to a press release from the medical examiner’s office, Floyd’s cause of death was, ‘Cardiopulmonary arrest complicating law enforcement subdual, restraint, and neck compression” Contributing factors included, quote, ‘arteriosclerotic and hypertensive heart disease; fentanyl intoxication; recent methamphetamine use.’ According to the report, George Floyd was also infected with COVID. That’s a lot.” The man was a walking medical time bomb. His death was a tragedy, but also highly predictable regardless of any interaction with the police.

“In August, after months of rioting, documents related to the autopsy were released in court. One was a memo detailing a conversation the prosecutor’s office had with Andrew Baker, the chief Hennepin County medical examiner. Andrew Baker told prosecutors that, ‘if Mr. Floyd had been found dead in his home (or anywhere else) and there were no other contributing factors, he would conclude that it was an overdose death.’ The memo noted that Baker said Floyd’s fentanyl levels were ‘pretty high’ and that it is a ‘fatal level of fentanyl under normal circumstances.’ In a separate memo, Baker announced that ‘the autopsy revealed no physical evidence suggesting that Mr. Floyd died of asphyxiation.’ ” Fatal level of fentanyl. No evidence of asphyxiation. How does it get clearer than that?