Shopping for Goya and making Cuban food seems to upset the Left. Good.

Given the recent praise of President Trump by Goya CEO Bob Unanue and the subsequent boycott of Goya Foods by liberals and Hollywood airheads, it behooves conservatives to purchase Goya products to indirectly support the president and upset Hollywood and the Left’s cancel culture actions.

So, as somebody who grew up Cuban and is a conservative, and who regularly uses Goya to make Cuban food for pals, I ended up this weekend with some friends first on their boat, then at their house cooking Cuban with Goya products. We did it as a big middle finger to Hollywood, the Left, and especially toward fellow Latins like AOC who ran for cover on this.

Democrat Marxist AOC tries to boycott an American company founded by hard working Cuban Americans & grown to become the great ⁦@GoyaFoods⁩ employing thousands & donating millions to the needy. We must vote against every single Democrat on Nov 3rd. https://t.co/Zy1B3zXZJw

MORE NEWS: Eric Adams Has Another ‘Luxury’ Solution For Housing Illegal Aliens in The Big Apple

It happened when we inadvertently got together at a local veterans watering hole as I was writing my first Goya piece on Saturday. The conversation started with the president, went to Goya, went to my culinary skills with Goya, and initially finished with pledges for weekend boating, shopping, eating, drinking, and smoking cigars. But the food was the real goal. 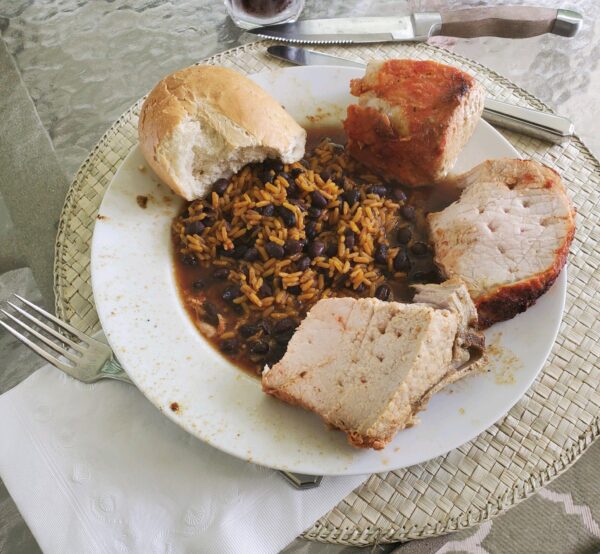 Above is the finished product. Okay, maybe getting a little ahead of myself here. And excuse the sauce-strewn plate. I’m not exactly Martha Stewart.

So after being out on the water I went on a supply run to a local Giant grocery store in a Maryland suburb of DC. Went right to the ethnic aisle and to the Goya section. And it was packed.

It was filled with people who were not the usual Goya consumers. Seeing the potential for an article, I talked to one of them.

The lady was in her 40s, a federal employee from the local area. She was apolitical but her husband is a conservative and they decided to try Goya because of the hubbub. He was at the other end of the supermarket, shopping for other stuff. She, seeing that I was probably a Latin, asked for suggestions. I gave her such and then, telling her I was a political writer, asked her if trying Goya for her, not for her husband, had any political significance.

She said, “Well, not at first. I don’t really get into politics. I vote, but I’m not vocal about who I support. But when other people who don’t know me like all those actors and politicians tell me I shouldn’t do something, like they know me or my family at all, it makes me think like maybe I should check it out.” Now, that lady is a true American. Thank God for her.

Very long story short: At the grocery self checkout I got some dirty looks from likely leftists, oh well. I bought the ingredients, got back and commenced to cooking. Per a promise I made to my readers on social media and to the folks I ate with, here’s the process and recipe for Cuban black beans, rice and roast pork. It’s not as good as my mom used to make, but it’s a lot more convenient, quick, and it’s in the gastronomic ballpark.

Depending on how many you’re serving, I’m thinking 4 here, buy a pork loin roast, boneless, and count on eight ounces per person. Buy two big cans of Goya black beans, the big bottle of Goya mojo criollo marinade, the eight-packet Goya spice small box with coriander and annatto, enough Goya yellow rice (some people prefer the traditional white rice) in the box (one packet will serve three) to meet requirements, and, if you don’t have access to Cuban bread, buy a loaf of French bread. Get some Sangria to drink with it.

MORE NEWS: FBI Could Be In Even More Hot Water As Disgraced Russiagate Agent Files Lawsuit

Get home and preheat the oven to 400. Take out the pork and stab it repeatedly with a prong or fork. Marinade with the mojo —use a third of the large bottle— and rub four packets of the spice into the mojo-drenched pork. Put it in the oven for about an hour or 90 minutes, depending on size, checking it on a regular basis. Do not undercook the pork. Drink Sangria throughout the entire process.

About an hour in, if you’re going for 90 minutes, start the beans. Put them in a sauce pan and add two spice packets and a third of the mojo. Put it on a medium heat until it’s really bubbling, then put it on simmer. Do not burn. Start the rice last—it’ll take about 30 minutes. Put in the rest of the mojo and spice in the rice as you start to cook it. Continue quaffing Sangria.

As the pork and the beans are cooking, dip the French bread into each and give samples of it to all and sundry. When the rice is done pour in pork drippings and beans. Mix it all together. Let sit on simmer. Do not burn. Take out the pork after the allotted time and let sit 10 minutes. Cut the pork into medium-sized pieces and serve with the rice and beans mix and any bread that is left. Viva Goya! Viva Trump!