What’s it like to be at a Trump rally and meet the president?

GOP operative and LifeZette reader Stacy Shea was there. She has been called half of 'The white Diamond and Silk.'

Stacy Shea, a LifeZette reader, grassroots activist, and veteran South Carolina GOP political operative, was rewarded for her recent efforts to help the president in South Carolina by getting an exclusive seat at his Monday night rally in Charlotte, NC, and a photo op with President Trump.

“One of the guys on ‘Fox & Friends’ knows somebody who was working with our anti-open primary effort in South Carolina. So the president, the president himself, calls our colleague Sunday and they are on the phone for fifteen minutes. The president asks if he, and the rest of us involved in the campaign in SC, would come to the rally and shake his hand. We were thrilled at the offer. 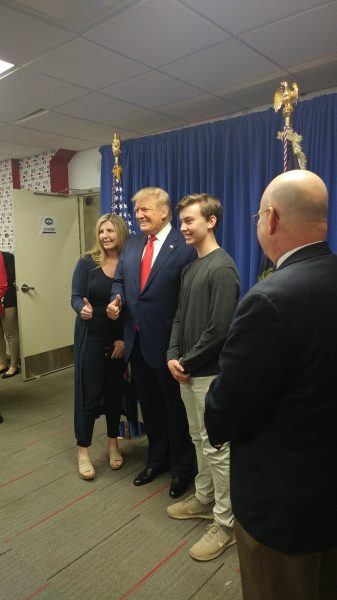 “We get there, get expedited entry, and are seated in the VIP section. Close to us are high-level elected officials and some wounded military veterans. After a bit they came and got us and ushered us back to a VIP room where there were more VIPs and the president. Me and my 13-year-old son Chance not only got to take a picture with President Trump, but got a chance to talk to him for a couple of minutes.

“He’s warm, authentic, personable, and interested in people. He has that ability most successful leaders have of making you the center of their world for a brief period. I thanked him for loving our country and restoring so much after the Obama years. He talked to Chance and then mentioned to me that Never-Trumper Bill Kristol had taken notice of our campaign, ‘I saw Bill Kristol tweeted that video of you and your friends. Isn’t he awful?’  Kristol had put out a tweet, whining like a b****, about us.

A Trump-Sanders smoking gun.
South Carolina Trump activists in a much-promoted Facebook video: "We're asking South Carolina Republicans to show their support for President Trump by crossing over and voting in the Democratic primary for Senator Bernie Sanders." pic.twitter.com/FNqEUNXDWq

“It was really funny because in those tweets and videos about the Kristol thing, some people had referred to my friend Karen Martin and me as ‘The white Diamond and Silk.’

“When the event started it was like a rock concert. There were all types of people there. The Trump campaign has achieved the kind of real diversity the Democrats have tried to lay claim to for decades. The energy was super positive and it was a great experience for me and also for my son.”

LifeZette will bring you other firsthand reports from Trump events in the future.

Ultra MAGA Kari Lake Wins GOP Primary In Arizona, Says This Is Proof Elections Can No Longer Be Bought [VIDEO]