The violence brought forth by the pro-transgender radicals was further condoned...

OAKLAND, CA – A group of feminists who were staging a demonstration on December 5th in opposition of California’s law allowing biological males to be housed in women’s prison were reportedly accosted and attacked by a group of pro-transgender radicals in response to the demonstration.

All the more unsettling, a San Francisco-based media outlet that operates more along the lines of an amplification tool for far-left extremists took to social media to cheer on the women being attacked.

Renowned feminist Kara Danksy was joined by a handful of other women on December 5th outside the Alameda County courthouse, with the group toting two large banners, one reading, “Dana Rivers Is A Man,” and the second reading, “No Men In Women’s Prisons.”

For the sake of context, Dana Rivers (whose real name is David Warfield) is a biological male who, in the late 1990s, began proclaiming that he was a woman. Rivers was subsequently fired from his job as a teacher over him discussing his transition with his students, with his termination later leading to a $150K settlement in his favor.

MORE NEWS: The Ghouls At Pfizer Don’t Know When To Stop

Rivers’ transgenderism and job loss/lawsuit debacle landed him some brief media attention at the time, but he eventually faded into obscurity – until he was arrested in 2016 for a triple homicide. The victims were identified as 56-year-old Charlotte Reed and 57-year-old Patricia Wright, a lesbian couple, as well as Wright’s 19-year-old son Benny Toto Diambu-Wright.

According to The Mercury News, police had found Rivers outside of the victim’s home, “drenched in the victims’ blood, having just gotten onto a motorcycle containing one of at least three murder weapons,” which authorities say she shot and stabbed the two women and then shot the 19-year-old after he discovered the scene.

The trial for the triple homicide was delayed for several years before finally kicking off in October of 2022, with Rivers being found guilty on all counts on November 16th.

And since Rivers’ case occurred in California, this biological male who has a documented history of lethal violence against women has the opportunity to be housed in a women’s prison.

Dansky has been following the Rivers case for years now and is among those adamantly against the concept of placing men – especially violent men – in women’s prisons, given the commonsense outcomes likely to arise from such obtuse inmate housing decisions.

But when it comes to the pro-transgender radicals, they’ll gladly attack a group of biological women to come to the defense of men playing dress-up, even if the man they’re defending the honor of is a sadistic murderer.

Dansky doesn’t subscribe to the transgender ideology in the slightest either, referring to her attackers as MRAs (men’s rights activists), as she believes the mere usage of the word “trans” serves to affirm the impossibility of gender switching.

“I was today years old the first time I found myself picking egg shells out of my hair and clothing after a MRA threw a raw egg directly at my head.”

I was today years old the first time I found myself picking egg shells out of my hair and clothing after a MRA threw a raw egg directly at my head. 1/5 pic.twitter.com/Dsl1sORhb5

Following the assault, Dansky had become privy to a local news outlet that alleged she and the other women were “crying” after being attacked, sharing a screenshot from the Indybay Twitter account alleging as such. However, Dansky countered that narrative, sharing a photo of her and her cohorts banded together and captioning the picture with, “We weren’t crying. We were actually in great spirits.”

We weren't crying. We were actually in great spirits. 🤣🤣🤣 More news coverage to come. 3/5 pic.twitter.com/DSWLId6Opz

Indybay is hardly any news outlet of journalistic repute, as it instead operates more like a hub for radical Antifa-types to rally their goons to terrorize any who challenges their absurd worldview.

On December 2nd, Indybay hosted an article that was, in reality, a call to action to accost Dansky and her allies, providing details of when and where Dansky would be on December 5th. Come December 4th, Indybay published another article of the same ilk, falsely claiming Danksy – again, a feminist – is aligned with “white nationalists.”

“TERFs with ties to the far-Right, white nationalists, and the Republican party are showing up in Oakland to assert trans women should be locked up in men’s prison and push a dangerous and divisive agenda that must be countered.”

Indybay even saw it appropriate to promote the December 4th article on their official Twitter account, further demonstrating the media outlet operates as a de facto Antifa hub/cell.

Monday 12/5: TERFs Out of Oakland!https://t.co/Vub8NIAJjA

But this media outlet is far more brazen on alt-tech social media, particularly far-left haven Mastodon, where Indybay posted numerous pictures of Dansky and her allies – including photos of when the group were attacked by the pro-transgender radicals.

One of the photos depicting the attack was captioned with, “‘Get out of Oakland!’ yelled as trans-rights activists snatched at least one of the TERF banners while they were doing a photo op at the #LakeMerritt amphitheater in #Oakland.” 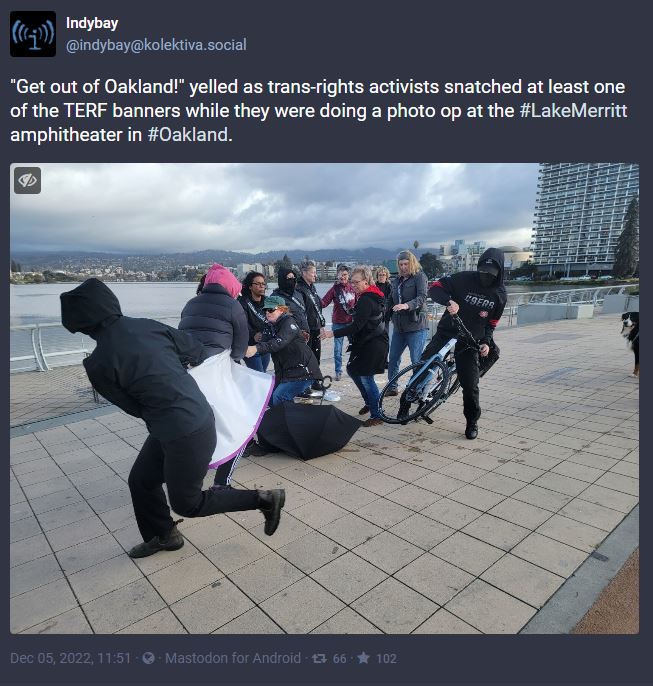 The violence brought forth by the pro-transgender radicals was further condoned by Indybay, with a second photo captioned with, “Strategically, it was a bad move by the TERFs to move to the amphitheater, away from police state protection near the courthouse. They didn’t realize there were 20+ trans-rights activists in the vicinity. Someone noted afterwards that a few of the TERFs were crying about their banner(s) being snatched, poetically remarking, ‘TERF tears water the garden of resistance.'” 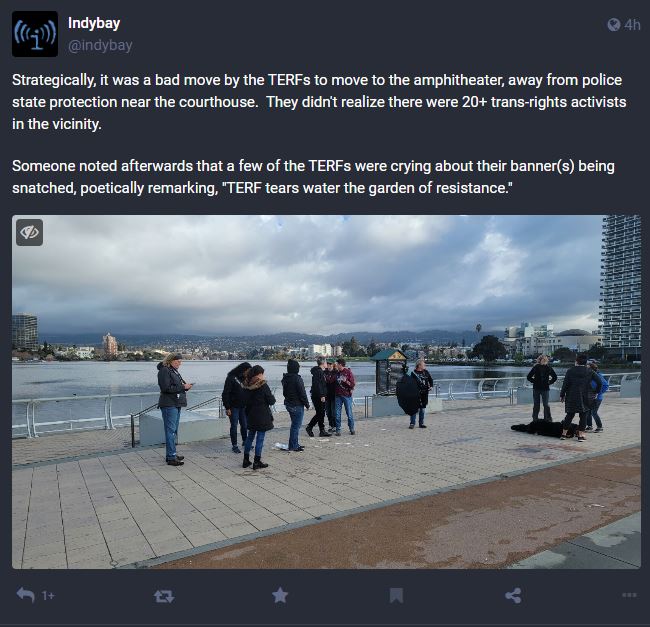 Nonetheless, despite being physical attacked and maligned by these pro-transgender radicals, Dansky remains undeterred and optimistic, writing on Twitter, “I don’t know why they think they’ll get us to shut up about the rights, privacy, and safety of women and girls and for the material reality of sex. But just let them keep trying.”

This piece was written by Gregory Hoyt on December 5, 2022. It originally appeared in RedVoiceMedia.com and is used by permission.

Notice how the terrorism is always performed by far left democrats.