"You are just spending less than last year, which is easy to do since you spent more money than has ever been imagined."

The Joe Biden administration has been caught several times fudging information and statistics on social media since Twitter has been freed under the Elon Musk takeover.

This time, the White House was attempting to give Biden credit for a lowered budget deficit. “The Biden-Harris Administration lowered the deficit with the single largest one-year reduction in American history.”

The Biden-Harris Administration lowered the deficit with the single largest one-year reduction in American history.

Fact-checkers gave more context to the tweet, however, citing the government’s own website from the Treasury. “COVID-driven deficits in both FY20 & 21 were roughly double the previous record (09), making the drop to FY22 sizeable. But the FY22 deficit is still the 4th largest in history and is 41% larger than FY19,” the fact-checking information read.

According to the Fiscal Data website, the total national deficit for the fiscal year 2022 (which ended September 30, 2022) shows a $1.38 trillion deficit. In 2019, before the COVID shake-up, the site shows the national deficit as $0.98 trillion. That was also, of course, before the Biden administration took over and passed billions of dollars in spending almost immediately.

“In FY 2022, the federal government spent $6.27 trillion and collected $4.90 trillion in revenue, resulting in a deficit,” the website reads. “The amount by which spending exceeds revenue, $1.38 trillion in 2022, is referred to as deficit spending.” 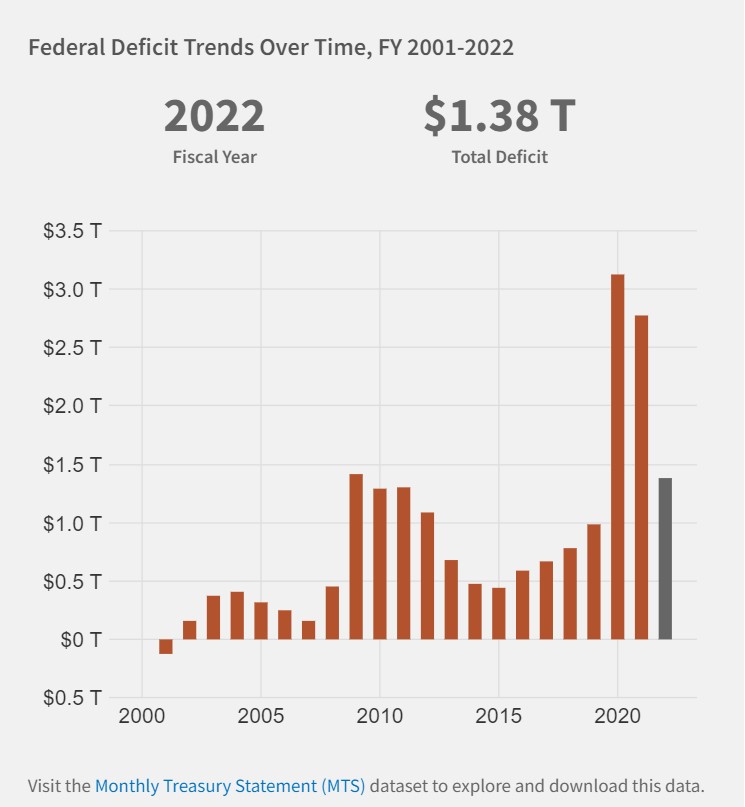 “YOU ARE NOT LOWERING THE DEFICIT!” read one response comment on Twitter. “You are just spending less than last year, which is easy to do since you spent more money than has ever been imagined.”

Another user said, “this is purposeful deceptive wording, which translates to ‘a reduction on the rate of increase’…. or simply ‘not accelerating as fast as before.’ The deficit is still exploding, but not as much as it was the year before…dishonest to call it a ‘reduction’ because it’s NOT.”

Indeed, the Treasury website said, “While revenue increased during the COVID-19 pandemic, from approximately $3.5 trillion in 2019 to $4 trillion in 2021, increased government spending related to widespread unemployment and health care caused spikes in the deficit.” The site doesn’t mention the increased government spending in other areas, such as the “Infrastructure Investment and Jobs Act” that cost $1.2 trillion, or their massive investments into things like other countries’ business (largely Africa and Ukraine) and climate change.

The Treasury site further said, “The size of the national deficit or surplus is largely influenced by the health of the economy and spending and revenue policies set by Congress and the President. The health of the economy is often evaluated by the growth in the country’s gross domestic product (GDP), fluctuations in the nation’s employment rates, and the stability of prices. Simply put, when the country’s people and businesses are making less money, the amount collected by the government also decreases. Similarly, when the economy is doing well and people and businesses are earning more money, the government collects more. On the spending side, the increase or decrease of spending also impacts the budget, creating deficits or surpluses.”

We are looking forward to this year’s Rand Paul “Festivus Report” to see exactly where the federal government is spending our tax dollars.

This piece was written by Leah Anaya on November 22, 2022. It originally appeared in RedVoiceMedia.com and is used by permission.