BELLINGHAM, WA – In a scenario that would conjure the thought (among reasonable people, at least) of ‘how can this be legal,’ a self-described “sex shop” based out of Bellingham is apparently one that allows customers of “all ages” to patronize the establishment, according to the store’s official Instagram account.

To put it plainly, an establishment peddling graphic sex toys and other iterations of adult-oriented materials appears to be openly advertising that their establishment can be patronized by minors – seemingly in an almost celebratory manner.

The sex shop WinkWink Boutique, located off of 1302 Commercial Street in Bellingham, isn’t unlike many other modern sex shops scattered throughout the country – boasting an inventory of, shall we say…intimate massaging tools, phallic-shaped objects designed to be placed in orifices, risqué lingerie, and adult-themed books about sex.

But there’s one glaring aspect about the shop that is rather unique and unsettling: the sex shop advertises that their establishment welcomes all ages. 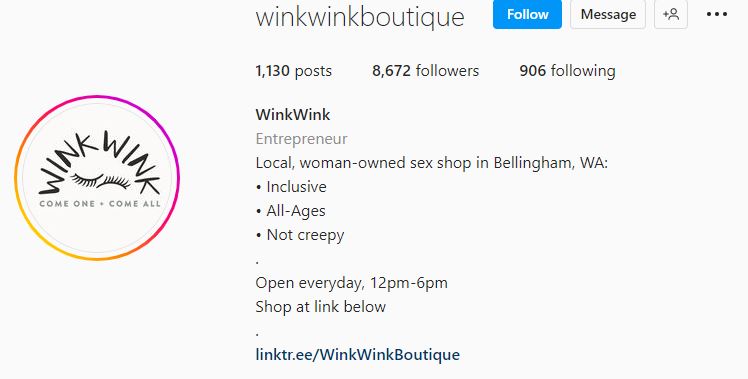 MORE NEWS: Self Sustainable Living, Farming, Health and More: The Self Defense Warrior Podcast With Pat Miletich and Jeffery Wilson

And yes, that apparently includes minors, according to WinkWink Boutique’s website.

In the website’s “About” section, there’s a portion dedicated to addressing their all-ages stance, noting, “There is no law or store policy that sets an age limit for our customers; all people are allowed into the shop,” adding that nothing in the sex shop is illegal to sell to minors.

WinkWink Boutique further justifies this unsettling in-store policy of welcoming minors by making the claim that “you may not realize this, but sex toys are widely available at many stores, including most big-box stores and drugstores!”

Call me crazy, but I can’t remember the last time I waltzed into a Walmart and stumbled upon the “cock rings” section or ventured into a Walgreens and randomly discovered a wide variety of “vibrators” resting somewhere between the Tylenol and NyQuil.

It’s almost as if WinkWink Boutique is a breeding ground for grooming – and that seems to be the case, especially considering the establishment admits their operation serves as a place where “young people” can “have a place where they can ask questions in a non-judgmental setting and get answers from sexuality educators that have their well-being in mind.”

And to add to the textbook grooming elements, WinkWink Boutique also presents their operation as a place for children to escape if they reside in a home where the adults impose some commonsense boundaries regarding engaging in sexual activity or obtaining sex-based materials.

“Lots of people are raised in environments where sex is treated with shame, fear, silence, and dishonesty. Many young people feel like they can’t ask questions about sex. Everyone eventually learns about sex from somewhere (or someone); unfortunately, what they often get is information that is inaccurate, unhealthy, and dangerous, putting them at risk.”

The above-mentioned portion of WinkWink Boutique’s website reveals some of the very common tactics associated with grooming children, one being the teaching of “sexualised behaviour, language or an understanding of sex that’s not appropriate for their age” while presenting themselves “as a mentor” or “authority figure.”

Not to mention the fact that WinkWink Boutique employs language in their all-ages justification that, while it could be brushed off as simply inviting language, bears a nefarious sub-context of pushing children to isolate themselves away from their families. If WinkWink Boutique were being any less subtle, they’d outright plaster online that kids growing up in conservative homes should come to them so as to participate in any number of degeneracies.

Guess what? The WinkWink Boutique debacle gets even worse because the owner of WinkWink Boutique is also a school board director for Bellingham School District. You can’t make this up: the owner of a sex shop that openly invites children to come and patronize the dildo-laden establishment is also involved with overseeing public education for youths in the very same city. 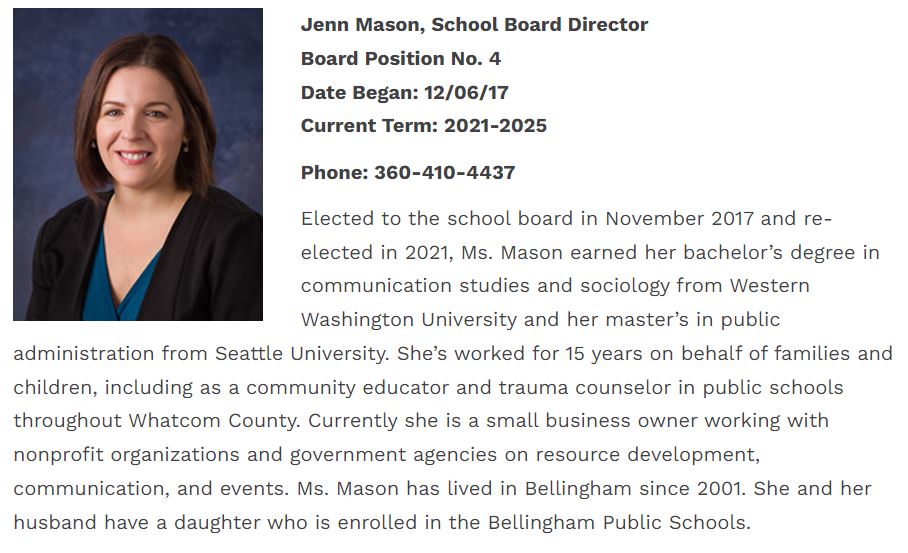 Jenn Mason holds the number four spot as a school board director for Bellingham School District, having been elected in 2017 and reelected in 2021, with her school board bio simply referring to her as “a small business owner,” conveniently leaving out that said “small business” is a sex shop that welcomes minors.

WinkWink Boutique, obviously under Mason’s direction, also holds classes for kids aged between 9 and 12 years old about sex education that is rendered the innocent-sounding title of “Uncringe Academy” but delves into topics that are hardly innocent for such youths.

And, again, the entire operation is unironically being run by a local school board director.

With this knowledge in mind, it’s no wonder why public schools are rife with concerning materials surrounding sex and transgenderism, as this is an example of a school board member whose secondary source of income partially revolves around children being groomed into sexual fetishes and degeneracy.

MORE NEWS: Historic Anti-Lockdown Protests Erupt Across China: “This Is the People Past Their Breaking Point”

But to have this sort of establishment that openly invites children being run by a school board director makes the matter all the more disturbing and sheds a light on why more and more kids today are developing issues regarding their sexual proclivities and perceived gender.

This piece was written by Gregory Hoyt on November 18, 2022. It originally appeared in RedVoiceMedia.com and is used by permission.

Sick Freaks. Wall that state in, let no one out.

We have totally peverted pedophiles in education now, all low IQ and evil as can be. She should be arrested and put in prison for what she’s doing. She is pushing pornography on children. What a sick and evil person she is. Get your kids out of public schools before they damage them for life!

“COMMENTS POLICY: We have no tolerance for messages of violence, racism, vulgarity, obscenity or other such discourteous behavior. Thank you for contributing to a respectful and useful online dialogue.”

And yet……….I just read an article that contained “vulgarity, obscenity or other such discourteous ” garbage.

Historic Anti-Lockdown Protests Erupt Across China: “This Is the People Past Their Breaking Point”