‘damaged by sloppy handling in the transfer’!

There is no denying the countless attacks on former President Donald Trump since he beat Hillary Clinton in the 2016 election. When it comes to the Democrats, there appears to be no limit at which they will go to tarnish the Republicans. While in the White House, they suggested Trump worked with the Russian government to steal the election and beat Clinton. Even after he left the Oval Office, both the Democrats and Biden administration have done everything in their power to make sure he won’t be on the ballot in 2024. Just a few weeks ago, the FBI raided the property of Trump, supposedly finding thousands of classified documents in his possession. While Trump fights the claims, he recently pointed to other former Presidents and how they were treated over sensitive materials.

Expressing his disdain for the constant attacks on Truth Social, Donald Trump wrote, “On top of the lost ‘Clinton Hard Drive,’ there are also tapes from the George H.W. Bush and Ronald Reagan Administrations which were lost AFTER having been ordered preserved by a Federal Judge. Some hard drives were even ‘damaged by sloppy handling in the transfer’! The National Archivist actually gave George H.W. Bush ‘exclusive legal control over all Presidential information.” Compare that to how unfairly and illegally the 45th President, me, has been treated!” 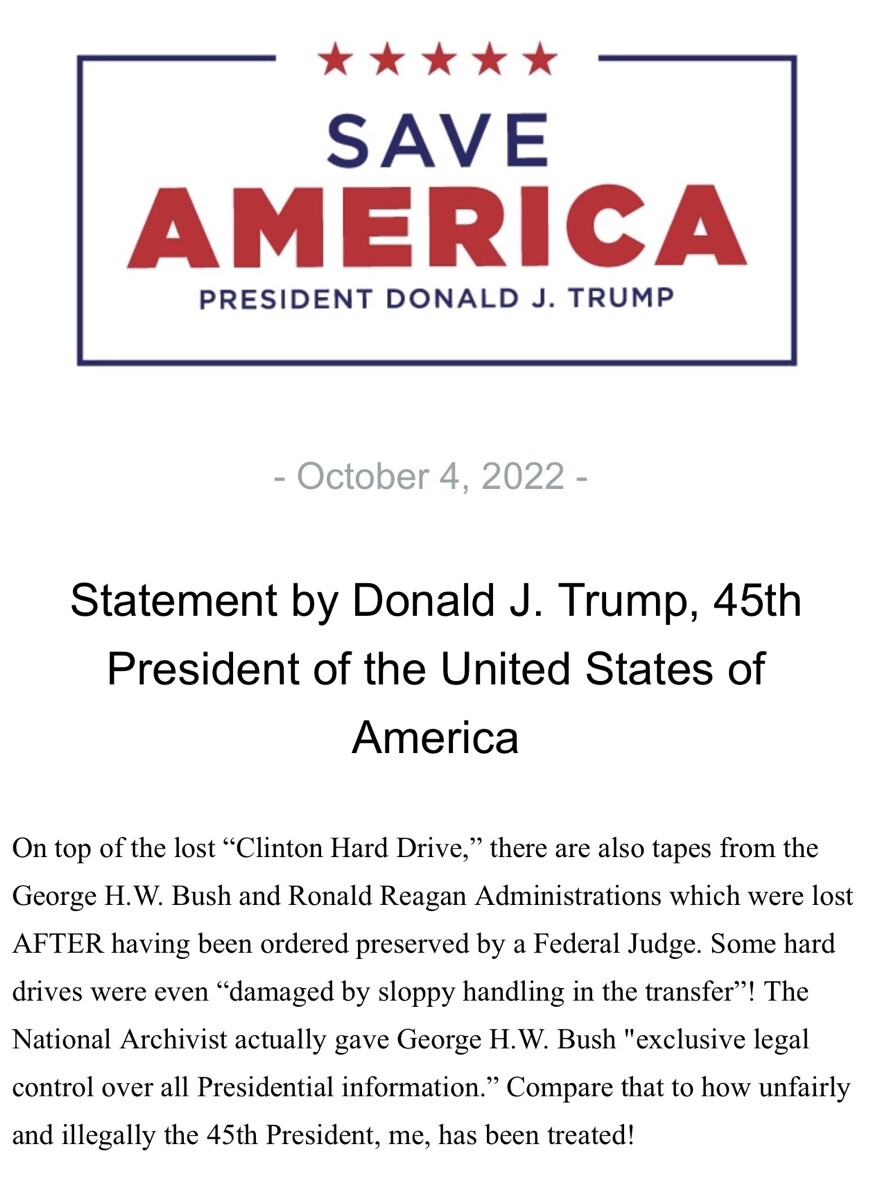 Not only did Donald Trump criticize the FBI for targeting him, but he also followed his statement with a link to a New York Times article dated March 14, 1993. It read, “A report by the Federal archivists who collected thousands of White House computer tapes in the waning hours of the Bush Administration indicates that several sets of the tapes, ordered preserved by a Federal judge, have been lost. A Feb. 16 memo from the National Archives panel that gathered the material said ‘many dates are missing’ from the piles of computer tapes hastily collected in the final 18 hours of the Administration.”

The outlet added, “A lawyer involved in the case that led to the judge’s order said it appeared that ‘several sets of tapes had been erased, perhaps inadvertently.’ The lawyer, Cheryl Walter, also said some hard disk drives that were removed from White House computers when the Bush Administration left office may have been damaged by sloppy handling in the transfer. She said the drives, which also contain data, were ‘thrown in a box with no padding’ as the archivists hurried to gather the material before the Clinton Administration took over on Jan. 20.”

Like many times before, Donald Trump once again finds himself dealing with the courts as he filed an emergency application on Tuesday, hoping the court would dispute the documents the Department of Justice claimed were classified at the time.

This piece was written by Jeremy Porter on October 5, 2022. It originally appeared on RedVoiceMedia.com and is used with permission.

Read more at RedVoiceMedia.com:
EXCLUSIVE: Man Acquitted In FBI’s Whitmer Kidnapping Plot Explains How The Government Ruined His Life
Far Outside Medical Norms: Until You Can Prove Safety, You CANNOT Justify Vaccine Mandates [VIDEOS]
EXCLUSIVE: Woman Who Underwent Youth Gender Transition: ‘I Lost My Voice, I Lost My Chest, I Don’t Know If I’m Going To Be Able To Have Kids’ [VIDEO]

Horrible Hillary belongs in prison for all her crimes against our citizens and shouldn’t be allowed to run for any office (except president of her cell block)
DJT has been treated totally unfair in comparison.