"Adam Kinzinger is attacking [McLaughlin] for being *checks notes* A Putin sympathizer?"

Republican Rep. Adam Kinzinger found himself getting dragged on Twitter earlier in October by what some have characterized as a series of “drunk-tweets” made by the congressman that made weird comparisons to the pro-life movement and the Russia/Ukraine conflict and wrongly accusing individuals of supporting Russia.

As it stands, Rep. Kinzinger, over the past year, hasn’t been doing his perceived image among Republicans any favors with his going along with the January 6 committee.

But Rep. Kinzinger somehow managed to embarrass himself and downgrade his public image even further on the evening of October 1st, initially with a tweet seemingly trying to take a jab at those among the pro-life movement by nonsensically suggesting “pro-lifers” are rooting or supporting Russia in the ongoing conflict with Ukraine.

“Here is what’s amazing. In Ukraine, they appreciate life, in Russia, Putin gives you a car (lada) for your son. But he won’t spend time appreciating your sacrifice. Keep this in mind ‘pro-lifers.'” 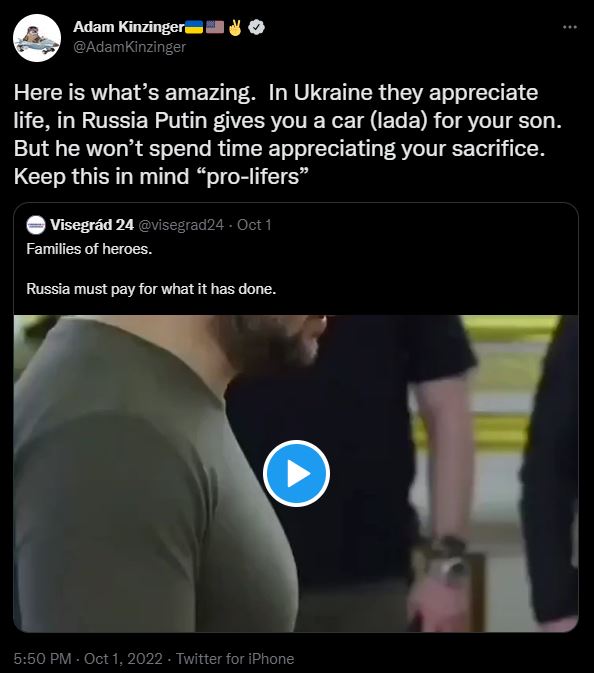 The attempt to tie pro-lifers – who are composed predominantly by those who identify as Republican/conservative – to supporting Russia falls flat when reviewing data showing that a majority of Republicans support Ukraine in the conflict. While Republican officials, and by extension, some constituents, have raised concerns over the money – and management of – being sent to Ukraine in recent months, this does not automatically translate into being pro-Putin or pro-Russia.

In response to Rep. Kinzinger’s nonsensical Twitter post, former RedState contributor Dan McLaughlin pointedly asked the congressman what he was talking about, writing, “[What the fuck] does any of this have to do with pro-lifers? We’re not the ones who invaded Ukraine. Didn’t you used to claim to be pro-life yourself?”

Rep. Kinzinger responded with, “I’m pro-life. But you all defend Putin for some reason,” which was an accusation against McLaughlin that has zero substance. 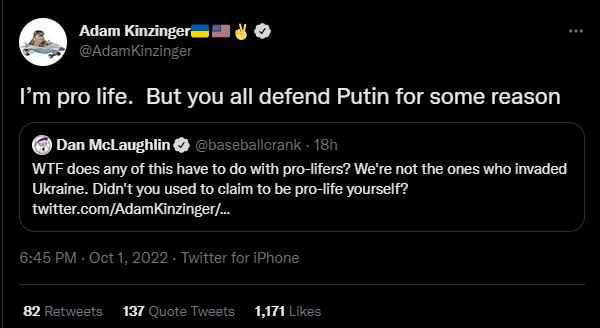 Rep. Kinzinger decided to try and crank out a performative own on social media, following up his prior tweet with another aimed at McLaughlin that read, “Hey [McLaughlin] was looking through your Twitter feed for an anti-Russian tweet in this 1938 moment, didn’t find one in recent time…Curious when the last one was given the many Ukrainians who gave their lives for freedom…Anti anti trump guy…” 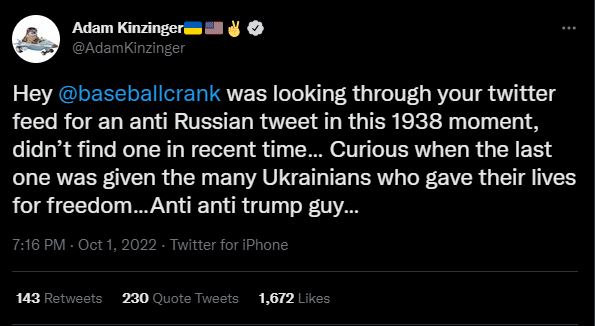 Numerous Twitter users were quick to point out Rep. Kinzinger’s absurd accusation, with one individual posting a screenshot from McLaughlin’s feed where he criticized Russia this past March, with the user mocking Rep. Kinzinger with, “Adam Kinzinger is attacking [McLaughlin] for being *checks notes* A Putin sympathizer?” 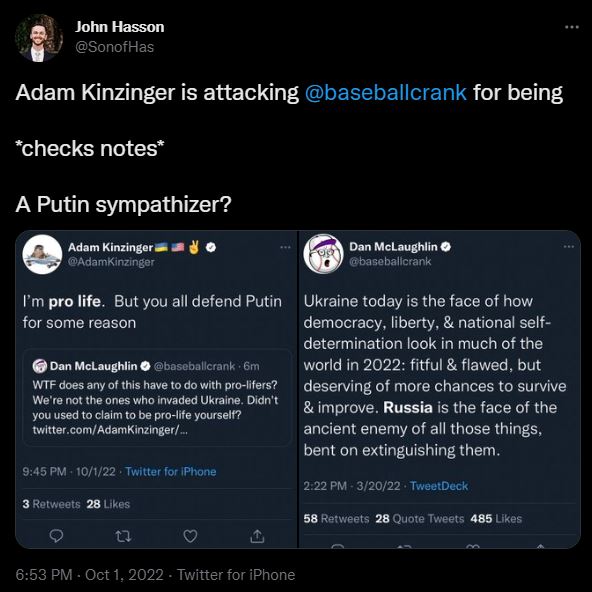 Another Twitter user was able to find McLaughlin being critical of Russia on Twitter a mere one day prior to Rep. Kinzinger’s series of ridiculous tweets and accusations, providing a screenshot of the post and writing, “Literally one day before. Kinzinger will probably end up deleting this too.” 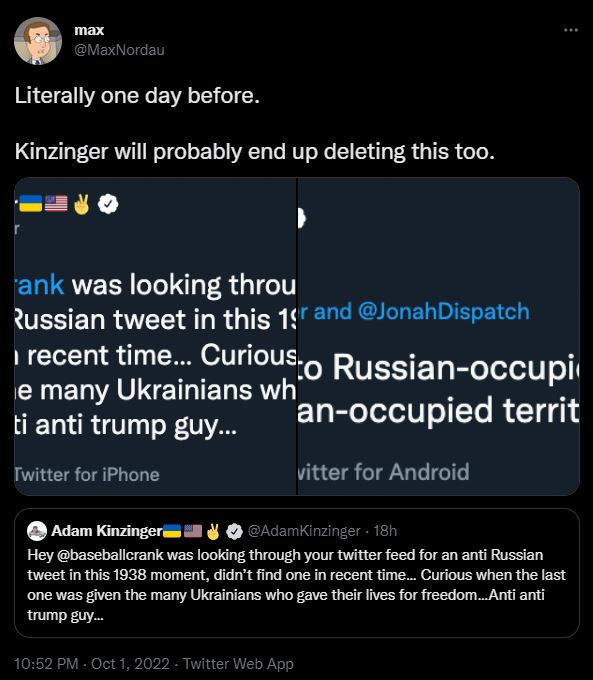 The context behind the screenshot shared by the Twitter user demonstrating McLaughlin’s criticism of Russia was in response to a since-deleted post from CPAC where it referred to Ukrainian territory as being “Ukrainian-occupied,” which can be construed as though the territory is up for dispute. 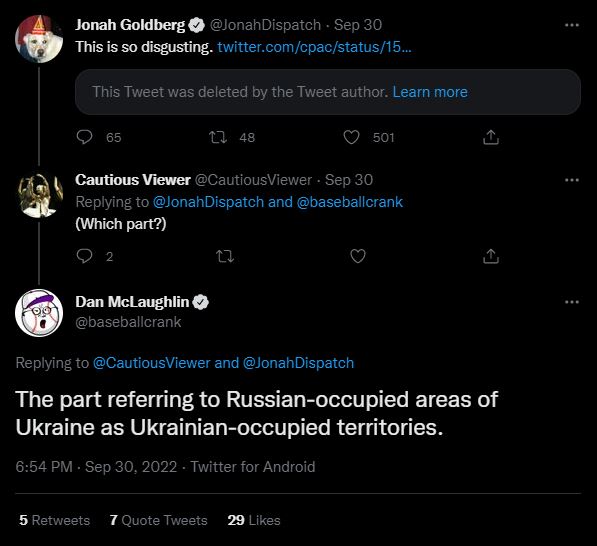 While Rep. Kinzinger is still playing along with the January 6 committee charade, there is at least the silver lining of him already admitting he has zero intentions of running for reelection to Congress.

This piece was written by Gregory Hoyt on October 2, 2022. It originally appeared in RedVoiceMedia.com and is used by permission.

Read more at RedVoiceMedia.com:
Praise God for the Control Group – The Canadian Data Is Alarming – Pandemic of the Vaccinated [VIDEO]
Canadian Actress Speaks Out of Line and Reveals Post-COVID Jab Injuries to the World [VIDEO]
‘Hell on Earth’: Rising Disabilities, Health Issues & Death Are Cause for Concern for a Complete Catastrophe [VIDEOS]

Go Adam.
Nothing like self destruction to undermine your “virtuous” J6 Committee performance.