HINTON, OK – On September 27th, female MMA fighter Helen Peralta had a message to send the folks over at Disney during the weigh-in for Invicta FC 49, where the MMA fighter opted to go topless at the weigh-in with two “X”s covering her nipples that had the words “Fuck Disney” written on them.

The 34-year-old flyweight managed to raise some eyebrows with the topless display at the weigh-in – undoubtedly at first for the topless display itself – but even more curiosity amassed when a savvy Twitter user realized what was emblazoned on the tape covering Peralta’s nipples. 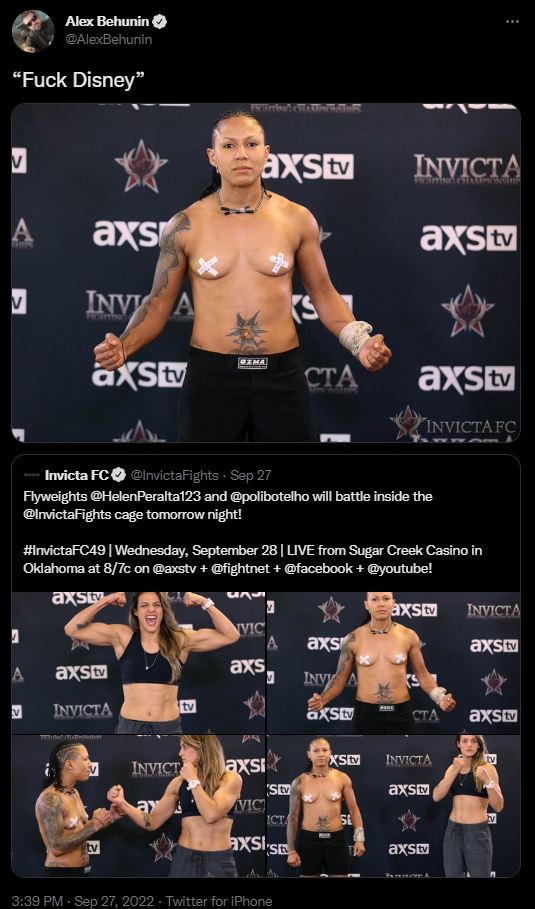 While Disney over the past year has managed to accrue quite the level of disdain from members of the public, the reasons behind why Peralta protested the company at the weigh-in for her fight is unclear.

However, MMA fighter Zac Pauga, who appeared on the show The Ultimate Fighter 30 alongside Peralta, afforded some “background” on the situation, mentioning this isn’t the first time Peralta has protested Disney in this manner.

“I’ll give you the background! She did this for her fight on TUF30 but the producers cut it and made her weigh in again after making weight just for the cameras. Funniest moment of the season and they cut it because ESPN is a Disney owned company.” 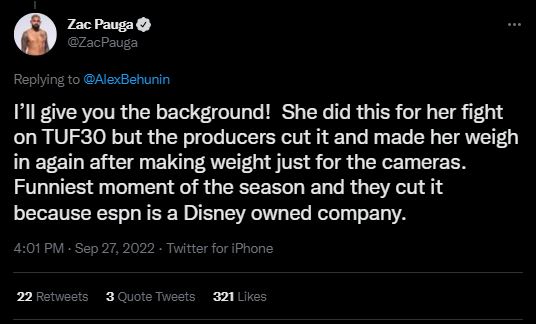 While Pauga’s insight on the protest showcased that Peralta has had a bone to pick with Disney for a bit, it still didn’t afford context as to why Peralta takes issue with the company.

Those taking to Peralta’s personal Twitter account for clarity on her ire against Disney were also left with an ambiguous response to the curiosity, with the fighter sharing a caption accompanied by her weigh-in photos that read, “For those who don’t want to know, go back to your regularly scheduled programming. This is just a glitch in the matrix. If you found me offensive, I’m not sorry. Just imagine a pound of silicone under each breast and boom , Now I’m just … brave. P.s I didn’t kill myself.” 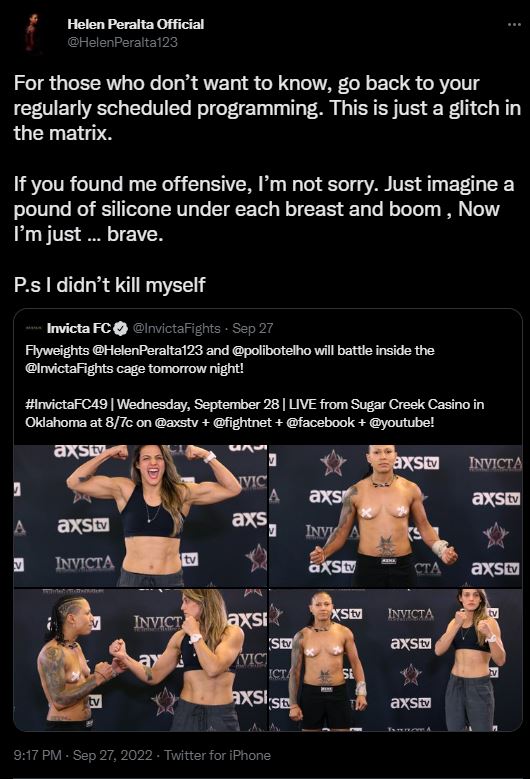 The confusion as to why Peralta is protesting Disney stems from the fact that Disney has been the target of protests on both sides of the political ideology aisle over the past year, with Disney getting flack from the left for not initially wanting to play politics in Florida over the “Parental Rights in Education” bill and then getting flack from the right when Disney caved to the left and spoke out against Florida’s law protecting children from harmful indoctrination at younger ages.

However, Seth Roy from The Daily Caller opined that regardless as to what Peralta is protesting Disney about, he thinks any protest against the House of Mouse is a “brave” one.

“Whether or not Peralta was protesting against Disney due to their recent debacles or not, Peralta is brave for going against the grain. Usually when somebody speaks out against a person or company that sides with the left, backlash ensues. It takes a lot of guts to speak out against a company that is as far left as Disney but by doing so, Peralta has definitely gained a fan or two.”

This piece was written by Gregory Hoyt on September 29, 2022. It originally appeared in RedVoiceMedia.com and is used by permission.