"Last year, the teacher was a man. I don’t think the school can fire him."

ONTARIO, CANADA – Earlier in September, photos and videos began circulating of a biologically male high school shop teacher in Canada adorning a blond wig, shorts, and a tight shirt with fabric nearly stretched to the brink of tearing over some ridiculously large prosthetic breasts.

This teacher has since been identified as going by the name of Kayla Lemieux, who is reportedly a Manufacturing and Technology teacher at Oakville Trafalgar High School in Oakville, Ontario.

Photos and videos of this teacher began making the rounds on Twitter in September, with most captions mocking his appearance – and rightfully so. As seen in images and videos, the teacher is sporting some comically large prosthetic breasts inside of the classroom that are somewhat larger than basketballs, complete with protruding faux nipples.

Apparently, this teacher began assuming the identity of a woman back in 2021, complete with adopting the name “Kayla Lemieux” in an effort to erase his birth name Stephen Hanna.

Given the over-the-top nature of Hanna’s appearance in the photos and videos, some online initially thought that it had to be some kind of parody – but students at the school have reportedly vouched that Hanna is dead serious. One such student commented on Twitter, “The kids here most definitely don’t think its [sic] normal…but realistically we can’t say anything. Last year, the teacher was a man. I don’t think the school can fire him.” 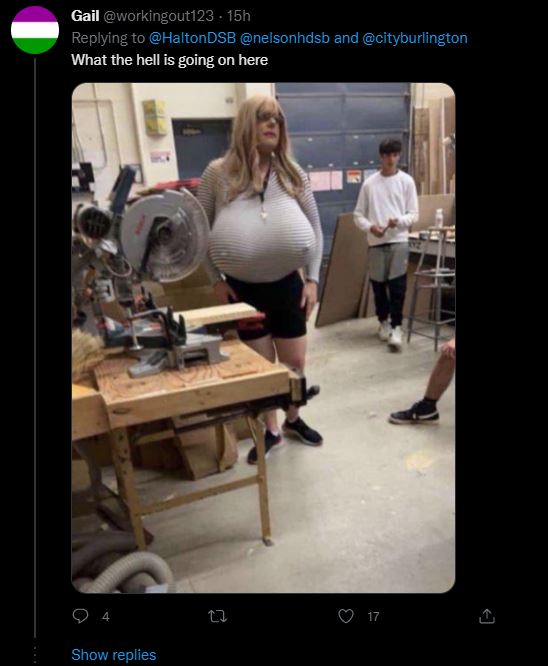 The high school which employs Hanna is reportedly overseen by the Halton District School Board. Said school board conveniently released a series of guidelines last October pertaining to “Gender Identity and Gender Expression in Schools.”

According to the opening portion of these guidelines, it reads, “The Halton District School Board (HDSB) recognizes the rights of students, staff, parents/guardians and community members to equitable treatment without discrimination based upon gender identity and gender expression. Gender identity and gender expression are protected grounds under the Ontario Human Rights Code.”

But with the absurdity of Hanna’s ensemble, therein lies the question of whether he’s in violation of some form of the school’s dress code. Well, the abovementioned guidelines address student dress codes (which would ostensibly be extended to this particular teacher), and the dress code is simply too vague to extrapolate a violation.

“Dress Codes – All students should be permitted to wear the clothing of their choice, provided that such clothing does not violate the school’s dress code. To support this, schools will: i. Develop dress codes that are non-gendered. ii. Permit students to express their gender in accordance with their identity.”

In the wake of the intense criticism coming from social media regarding this teacher’s obscenely sexist display, Oakville Trafalgar High School has since removed the names/contact information of their teaching staff from their website and reportedly sent out an email to parents hiding behind their gender identity policy. 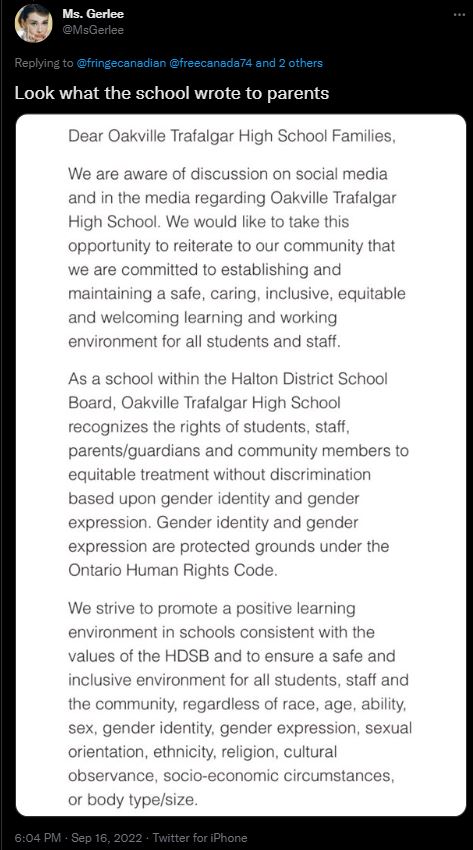 In short, it seems as though there are no intentions to either reprimand or dismiss Hanna for the outrageous attire he wears in the classroom – nor does it seems there are any plans to instruct him to knock off the display.

This piece was written by Gregory Hoyt on September 17, 2022. It originally appeared in RedVoiceMedia.com and is used by permission.

Every female student should get some of those fake breasts and wear them to school. If this fake woman can get away with it, so should they.

If there’s some kind of contest for the stupidest looking pervert this guy is a hands down favorite.

Over 30 Dead In Thai Daycare Shooting