Miami Firefighter Mocks Police Officer Killed In The Line Of Duty, It Doesn’t Go Well For Him

MIAMI, FL – A Miami firefighter was suspended from the department after it was discovered he mocked the death of a Miami police officer who was fatally shot in the line of duty earlier this week, with the firefighter capping his online rant suggesting the fallen officer deserved it with “Fuck the police.”

On August 15th, 29-year-old Officer Cesar “Echy” Echaverry was shot in the head when confronting a robbery suspect, with the five-year- veteran from the Miami-Dade Police Department succumbing to his injuries two days later while being treated at an area hospital. The robbery suspect who fired the fatal shot was also killed in the firefight with police on August 15th.

On August 18th, one day after Officer Echaverry succummbed to his injuries, firefighter Kevin Newcomb mocked the officer’s death in an online forum – suggesting the officer deserved to be killed because he may have been unjabbed or was “probably against gun control.”

“Who cares another dead cop probably against gun control. They didn’t give a fuck when kids were dying in that school shooting they stood outside. Cops exist for the government to exercise its monopoly on violence. They want the whole world to stop when one of theirs goes down. How many idiots I had to transport with honor guard their dead bodies from coronavirus because they all were too stupid to wear masks or get vaccinated. All cops are for is protecting the rich property owners and the status quo, Everything else is a farce. Fuck the police.” 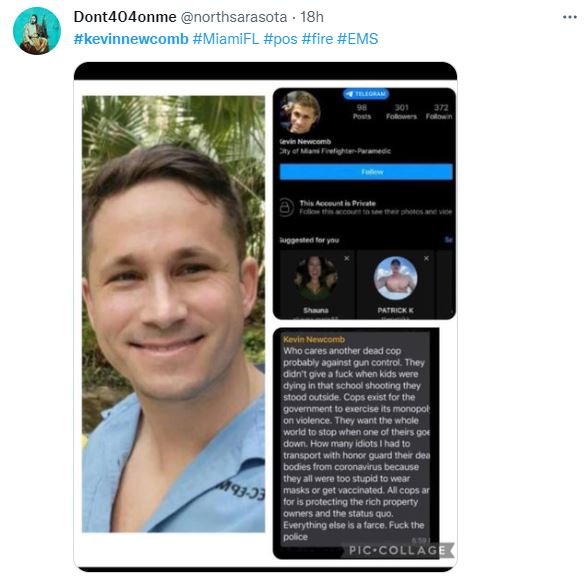 Needless to say, the online comments made by Newcomb weren’t exactly well received once they began to spread, with them eventually gaining the attention of Miami Fire Chief Joseph Zahralban.

Chief Zahralban issued a formal statement on the matter, confirming that Newcomb has been “relieved of duty” whilst an investigation plays out regarding the comments made by the firefighter.

“We have been made aware of a message that has been circulating regarding a written statement posted by one of our members. At this time, we are conducting an investigation into the statements that were made and the individual has been relieved of duty pending the outcome of an investigation. We want to be very clear that we, as an organization, do not share the views or beliefs that were written and do not reflect the values of our organization.

“As public safety professionals, police officers and firefighters depend on one another to ensure our mutual safety. It is the foundation of our working relationship and the source of our respect for one another. We continue to stand in solidarity with our brothers and sisters in law enforcement, alongside the Echaverry Family and the entire Miami-Dade Police Department during this difficult time.” 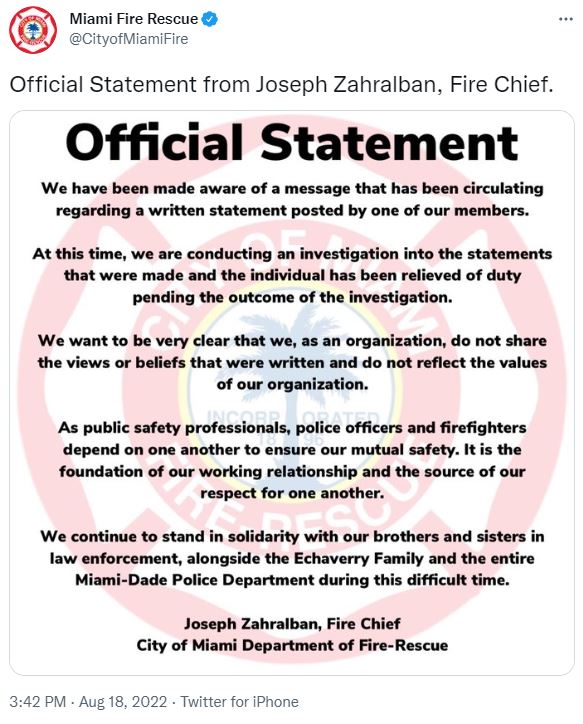 Newcomb has since locked-down all of his known social media accounts and has yet to publicly comment on the matter.

This piece was written by Gregory Hoyt on August 19, 2022. It originally appeared in RedVoiceMedia.com and is used by permission.

Back the blue like a good Toby or suffer the wrath of your free speech.

Police officers and fire department put their life in the line for others every day, how is it that not getting the death shot or wearing a mask make it where this selfish man thought he could make this statement, alot of his fellow fire department refused the death shot also which was their right to do in my opinion. But for this man to praise an officers death of being shot by a criminal in the commission of a crime is down right sick, This is the people the Democrats love those that praise people who opposed mandatory vaccines and makings deaths the new Nazi party and their sick following. And they say Trump supporters are bad at least we don’t praise people’s deaths, or burn and loot innocent Americans businesses over our knowledge of our votes being stolen threw a rigged elections we took our abjection right to the capital building and they arrested us with no due process for two years in jail treated less than human by DC jailers. Maybe we need to start ignoring the laws also, if double standards are going to be the norm in this country because I know am sick of it. 1/6/2021 was a set up by Nancy and Company and these Democrat Nazis know it to they just don’t care because it’s against us, but their day is coming!