According to a report from the Daily Caller, former CIA director Michael Hayden agreed with the sentiment that the current Republican party is the most “dangerous” political group in existence today, even noting in his agreeance that this sentiment is coming from a former “CIA Director.”

It’s no mystery that hyperbolic rhetoric (particularly from the left) has become quite commonplace ever since the lead-up to Donald Trump taking the White House in the 2016 election.

Terms like “Nazi,” “white supremacist,” and innumerable other labels have been flung so frivolously over the past six years that they’ve almost been rendered meaningless and carrying less of the intended zing that said labels traditionally carried.

As such, it comes with little surprise that some random blue checkmark on Twitter would express some kind of negative sentiments towards either Trump or the GOP in general, considering one can stumble upon said sentiments at any given time on the platform.

In this case, the hyperbolic grumblings about the Republican party came from a man by the name of Edward Luce – one of the many blue checkmarks on the platform that hardly anyone is familiar with, but is apparently a notable personality because he’s an associate editor at the Financial Times.

On August 11th, Luce wrote on Twitter, “I’ve covered extremism and violent ideologies around the world over my career. Have never come across a political force more nihilistic, dangerous & contemptible than today’s Republicans. Nothing close.”

For the sake of context, Luce is apparently 54-years-old and was born in the United Kingdom, eventually immigrating to the United States – and in all his years on this planet, the worst possible “political force” he can conjure up in his mind is that of the modern Republican party.

Luce even started working for the Financial Times back in 1995, meaning in his career he’s covered the rise and endeavors of groups like al-Qaida, ISIS, Egyptian Islamic Jihad, Gama’at al-Islamiyya – just to name a few – and landed on the GOP as being the worst of the worst.

Yet, despite the absurdity of Luce’s espoused notion, he managed to get the sign-off from former CIA director Hayden, who retweeted the opinion of the Financial Times associate editor with a caption that read, “I agree. And I was the CIA Director.” 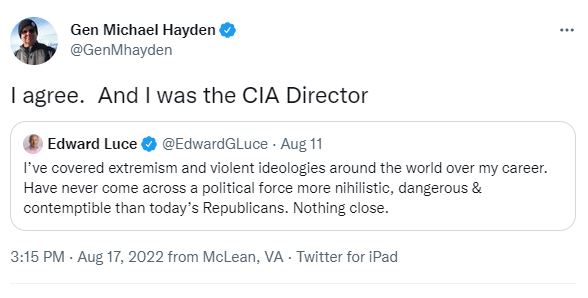 Then again, this sort of “Republicans/Orange Man bad” schtick from Hayden is par for the course, as days earlier in August he tweeted, “Sounds about right,” when someone referenced how the Rosenbergs were executed in 1953 for handing over nuclear secrets to Russia – an obvious allusion to the Trump/Mar-a-Lago raid where people had speculated that Trump was harboring nuclear secrets.

Back in August of 2021, in the midst of Biden’s botched Afghanistan withdrawal, Hayden also championed the idea of sending non-jabbed Americans as well as MAGA enthusiasts over to Afghanistan.

Republican National Committee spokeswoman Emma Vaughn slammed Hayden’s latest comments aimed at the GOP, noting how this “dangerous rhetoric from the left” has already resulted in assassination attempts on Supreme Court justices and numerous other acts of violence.

“A former CIA director is labeling half of Americans as worse than ISIS and Al-Qaeda. Dangerous rhetoric from the left led to an assassination attempt on a U.S. Supreme Court Justice, a shooting at a Congressional baseball practice, Molotov cocktails at pregnancy centers, rampant crime in major cities, and an open border. Call out the left on their threatening hyperbole, then we will talk.”

This piece was written by Gregory Hoyt on August 18, 2022. It originally appeared on RedVoiceMedia.com and is used with permission.

Is this guy for real. Republicans care about this country more than they do and those that say evil about them are trying to split the American people!

Another government agency gone rogue. They’re deep state operatives just like our other federal law enforcement agencies. Same with the Democrats and Rino’s.

All of this White Supremacist crap is a setup so when some insignificant event occurs they can declare martial law in order to round up firearms. If that is not right you should be very happy I’m on your side.