GRAND RAPIDS, MI – According to a report from The Gateway Pundit, a female FBI agent reportedly stayed in a hotel and slept in the same bed as one of the men charged in the FBI-contrived Gretchen Whitmer kidnapping plot from 2020 while the FBI-led plot was in motion. Apparently, this female FBI agent had also smoked some pot with the individual as well.

The purported plot to kidnap Michigan Governor Gretchen Whitmer back in the summer of 2020 serves as arguably one of the biggest embarrassments to the FBI in recent history, considering that months after a handful of suspects were arrested it was revealed that the kidnapping plot was essentially manufactured and funded by the FBI.

Far from being a hyperbolic description of the matter, the evidence of the FBI essentially dreaming up and executing this effort was so overwhelming that two suspects brought to trial – 24-year-old Daniel Harris and 33-year-old Brandon Caserta – were found not guilty this past April.

Two others charged in the matter, the 38-year-old purported ringleader of the alleged kidnapping plot Adam Fox and 46-year-old Barry Croft, Jr., went to trial with the jury coming back hung and thus a mistrial was declared.

However, since a mistrial was declared in the cases against Fox and Croft, the government were afforded another opportunity to take a crack against the two in a new trial – which said trial against the two kicked off earlier in August.

On August 12th during the new trial, an informant working for the FBI who aided in furthering the cooked-up plot admitted on the stand that she not only slept in the same bed in a hotel room with Croft, but had also smoked some pot with her designated target.

Julie Kelly, who has been following the renewed trial against Fox and Croft, took to Twitter on August 12th to share details about the in-trial revelation.

“Holy Moly–tuning in to Whitmer trial. FBI agent handling one of the informants admitted a female FBI informant slept in the same hotel room and same bed as Barry Croft, the informant’s target. This was related to a training exercise in Wisconsin hosted by another FBI informant.

“Under cross, FBI agent couldn’t say if that was against FBI policy handling informants. ‘Sometimes informants have to play along.’ They also smoked pot together. FBI agent: ‘It’s an illegal activity. They can’t participate in that.’ At least 5 FBI informants surveilled Croft.” 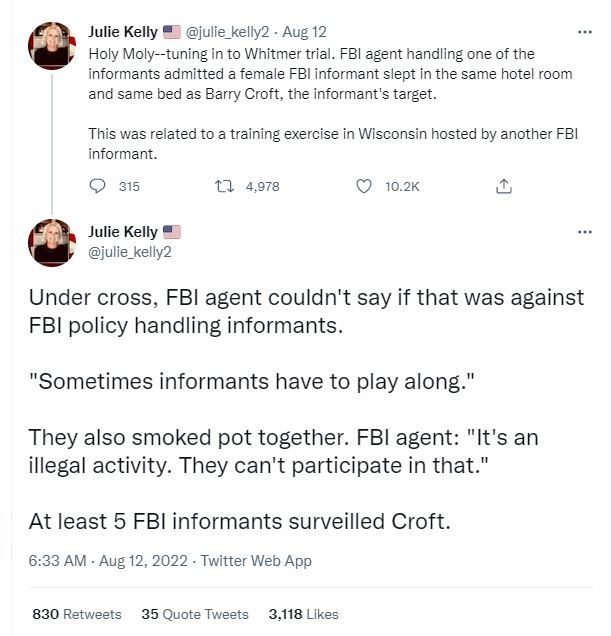 Kelly added onto the Twitter thread with additional in-trial revelations, noting how the men entrapped by the FBI “wanted to disband,” but informants working for the FBI were instructed to keep them together and convince them to further the illegal plot.

“Text from FBI handler to FBI informant tasking Croft: ‘Keep working to solve the differences in the group. Show them they were brought together by Croft and he has good ideas.’ Defense [attorney] notes FBI wanted to keep an alleged terror group together that wanted to disband.

MORE NEWS: ‘We Now Have the Smoking Gun’: Jack Posobiec Weighs in on the Twitter Files

“WE DON’T PLANT EVIDENCE! Defense [attorney]: ‘The Facebook page that all this was going through was created by the government. We put in a record today that showed that Steve Robeson (FBI informant) created the event in Wisconsin that you’re going to hear a lot about.'” 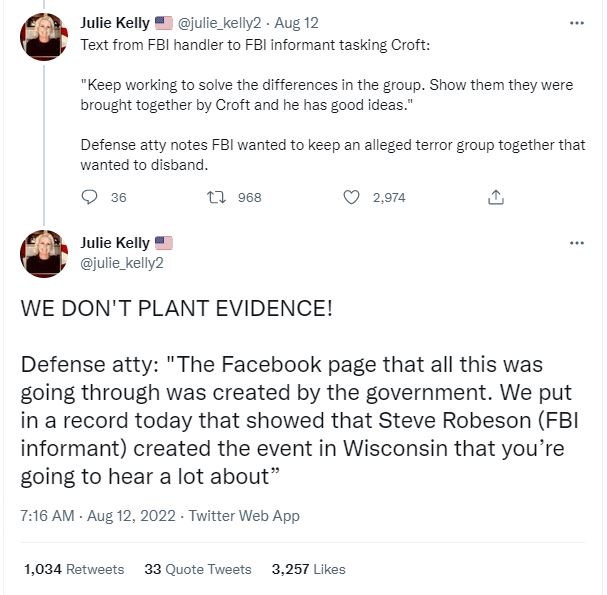 The entire kidnapping plot dreamt up by the FBI has been marred with scandals that manage to exist outside of the plot itself, such as former FBI agent Richard Trask – who was one of the lead agents associated with the purported Governor Whitmer kidnapping plot – who was convicted of beating his wife in December of 2021.

And u wonder why no one trusts the corrupt FBI,CIA,DOJ, or the lawless,hidenbiden administration, because they can’t be trusted.

All of America needs to be aware of these details and know that our government is not beyond setting anyone up in the pursuit of their agenda; which currently is destroying America. The FBI elite has been infiltrated by Marxists and Communists and sadly we have very few who; like the whistleblower, are willing to risk losing jobs of positions to protect our Republic!

The corrupt female “agent” must be fired, along with all of the other FBI people involved in this crime committed by the FBI.

The corruption in and of the Xi den regime continues, unchecked, at a breakneck pace. At least until 1 Jan 2023.

Set up is what they are doing to Trump via FBI raid/search of his home in Mar Largo. We all know there is nothing to find so they will create some phony documents, pictures, etc. This corruption needs to stop and Trump can/will fix it if we vote all Republican and re-elected him in 2024.
Vet