"Because someone has been caused, obviously, anxiety based upon your social media post. That is why you have been arrested."

ALDERSHOT, ENGLAND – In July, a 51-year-old man was arrested in the Hampshire town of Aldershot by British police after allegedly posting a meme to Facebook that “caused anxiety” for an unnamed social media user due to the meme poking fun at the authoritarian/tyrannical influence the LGBT community holds over society.

The meme in question was one that was previously posted by Laurence Fox, a British actor turned political activist, to Twitter during the Pride month craze. Said image, which wound up seeing Fox locked out of his Twitter account, displayed four Pride flags arranged in a manner that rendered a colorful swastika in the center of the image. 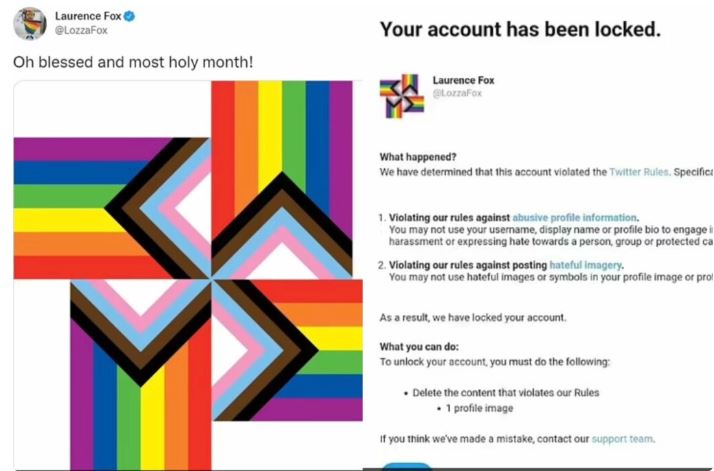 Fox would later explain that the image in question was meant to highlight how Pride month has seemingly transformed from a celebration into a sort of dogma that is being “enforced with a sense of hectoring authoritarianism.”

Sometime after Fox posted the abovementioned image to Twitter, 51-year-old Darren Brady reportedly posted the same image to Facebook – which that move resulted in not one, but two visits from police.

Apparently someone had called the police on Brady for the post, claiming to be incensed by the content. During the first visit from police, officers reportedly told Brady that he had the “option” of shelling out £80 (about $98 in the U.S.) to attend a “reeducation course” so as to avoid arrest and a potential hate crime charge.

Ten days following the first visit from police, officers returned to Brady’s home to place him under arrest as well as another man identified as Harry Miller, a former police officer who has since turned to activism that tried to stop officers from arresting Brady over a simple meme.

Fox, who Brady had been in contact with following his first visit from police, was on site at the time of Brady’s arrest and was able to film the interaction between the responding officers and Brady.

After Brady had been placed in cuffs, he plainly asked the officer why he was being arrested.

“I posted something that he posted, you come to arrest me, you don’t arrest him. Why has it come to this? Why am I in cuffs because of something he said, then I said?”

One of the officers on site explained that it was Brady’s post that had been reported to authorities, thus why he was being targeted for arrest.

“Because someone has been caused, obviously, anxiety based upon your social media post. That is why you have been arrested.”

It’s hard not to see the irony in the originating social media post alluding to the LGBT community functioning as sort of a modern-day Nazi/Gestapo faction, and then the same exact post making this allusion sees someone arrested for posting it online.

Following Brady’s arrest, Fox provided an update on the matter with an issued statement from the Hampshire Constabulary Police, where police officials admitted that the arrest of the man over a meme shared online was likely not the best course of action.

This piece was written by Gregory Hoyt on August 1, 2022. It originally appeared in RedVoiceMedia.com and is used by permission.

England is a shit hole. And , the “bobies are gay rump wranglers.