Someone once said the left can't meme...

A staffer for Joe Biden performed quite the blunder in an attempt to co-opt and parody the various “Dark MAGA” memes earlier in August by sharing a “Dark Brandon” meme hyping up the sitting president. However, the meme in question that was shared managed to spark up some controversy due to it containing apparent Nazi imagery.

White House Deputy Press Secretary Andrew Bates took to Twitter on August 7th to share a meme he likely thought was going to conjure up some laughs at the expense of ardent Trump supporters.

Instead, the “Dark Brandon” meme he shared was the equivalent of kicking a hornets’ nest once it was realized that the Batman logo parodied in the meme was replaced with what appears to be a Reichsadler.

Jack Posobiec was among the many online to point out that the meme Bates shared contained the Nazi imagery, speculating that Bates likely ripped the meme off of online image board 4chan. 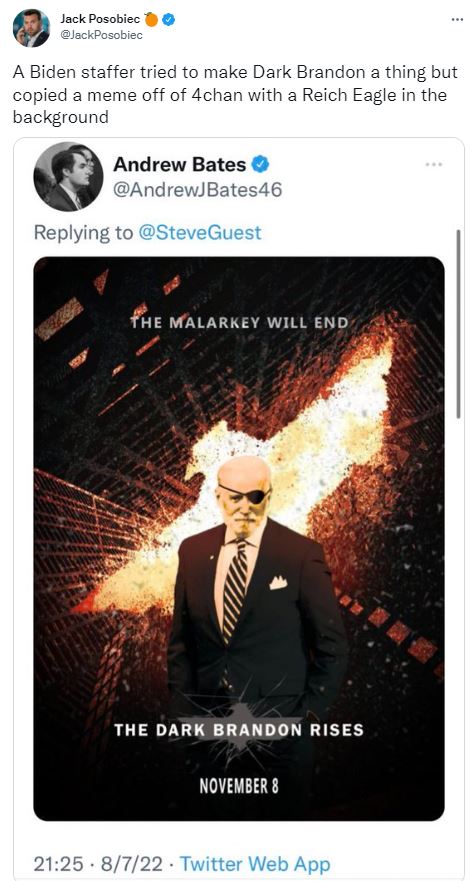 Others also joined in on the mocking of the White House staffer for his apparent ignorance in sharing the image, with one user writing, “Bruuuh lol. You work at the White House and you’re tweeting out a pic of the president with the Nazi eagle behind him lmfao.” 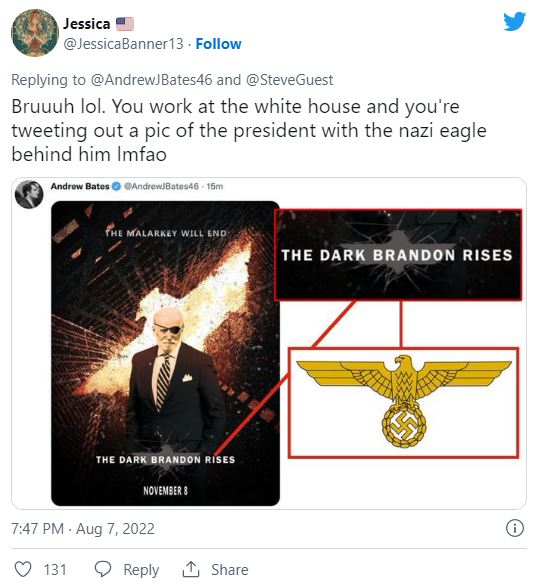 Now if the ignorance regarding the embedded imagery in the meme weren’t already stirring up enough controversy, the alleged origin of the “Dark Brandon” series of memes circulating online brings the matter up several notches.

Apparently Bates has been trying to make the “Dark Brandon” meme gain cultural relevance for a bit, as he also shared another iteration of the meme where he captioned it with, “Dark Brandon is  crushing it.” 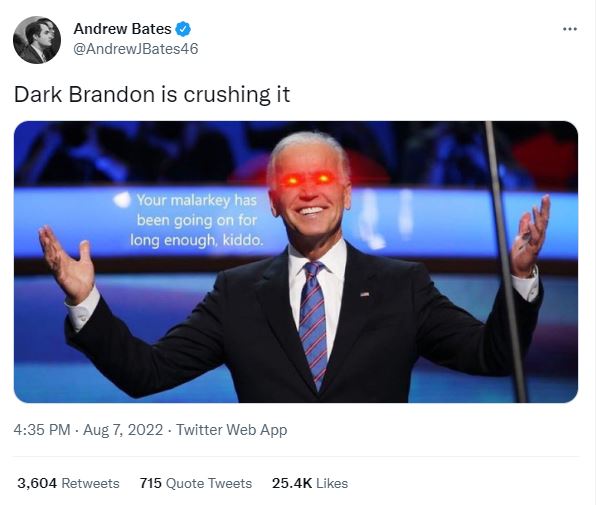 Alec Sears on August 8th revealed that the “Dark Brandon” meme concept originated in none other than China, captioning the tweet bearing the evidence with, “‘Dark Brandon’ started as Chinese propaganda and then the White House co-opted it using Nazi Eagle imagery…They’re not sending their best.” 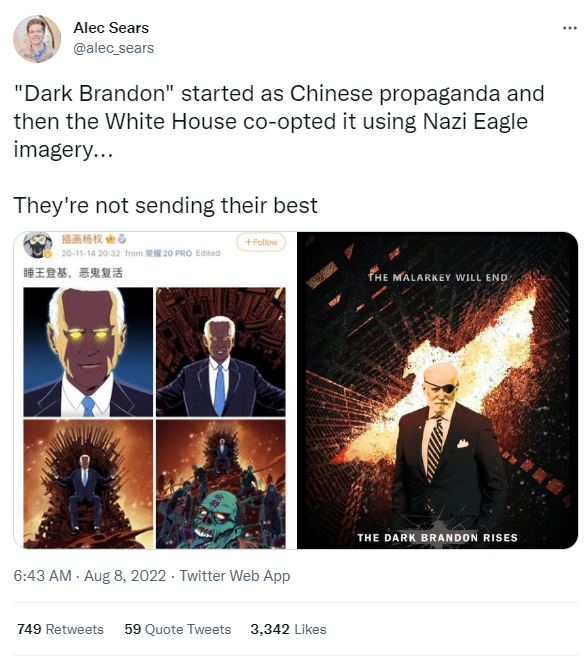 Sears followed up the aforementioned post with another jab at Democrats, writing, “The one time the left tries to meme and it’s literally just Chinese propaganda lmao.”

Donald Trump Jr. pointed out the mainstream media’s silence on Bates’ social media blunder, emphasizing, “So Biden’s Deputy White House Press Secretary, [Andrew Bates], is posting literal Nazi memes on Twitter and our corrupt media is completely silent about it. I’m sure that if this was a Trump WH staffer, the media would treat it the exact same way and totally ignore it .” 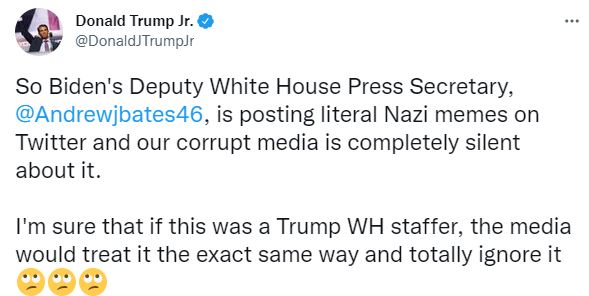 Tobin Stone, who took credit for creating the “Dark Brandon” meme that was inspired by “The Dark Knight Rises” movie poster, claimed that the stylized eagle portrayed in the meme wasn’t intended to be perceived as a Reichsadler. Speaking with outlet the Daily Dot, Stone claimed, “The eagle is not, and was never intended to be the Reichsadler —it was just intended to be a representation of America’s national bird, the bald eagle, and any reasonable person would interpret it as such.”

This piece was written by Gregory Hoyt on August 9, 2022. It originally appeared in RedVoiceMedia.com and is used by permission.

Woman Who Underwent Youth Gender Transition: ‘I Lost My Voice, I Lost My Chest, I Don’t Know If I’m Going To Be Able To Have Kids’ [VIDEO]