'Something to the effect of." 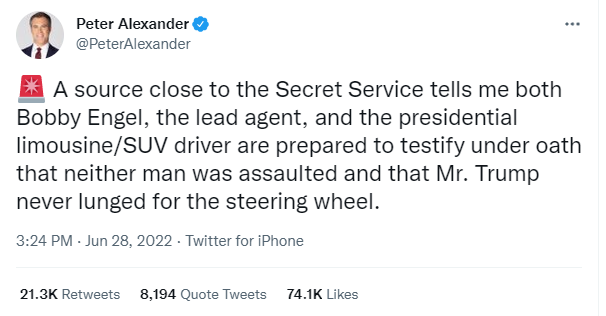 “Now, despite that Snopes wants to make sure you believe that the Secret Service did not debunk Hutchinson’s testimony. Strange because the article itself points out that both Ornato and Engel have appeared before the Committee on the record and behind closed doors at the committee’s request. Those sessions were recorded, but not used in Tuesday’s hearing. I wonder why. The article also points out “(Note: Hutchinson referred to the presidential limousine known as “The Beast.” However, Trump rode in a suburban that day.)

But wait, there’s more. ABC News says Hutchinson testified she wrote a note dictated by Trump’s chief of staff Mark Meadows, but former Trump White House lawyer Eric Hirshman is claiming that note regarding a potential statement for then-President Donald Trump was written by him. With all of these inconsistencies wouldn’t the public have been better served to have fact-checking articles on Hutchinson’s testimony? With such a devastating recounting of January 6, what did she actually say clearly? ” – Kristi Leigh

This piece was written by Zach Heilman on July 4, 2022. It originally appeared in RedVoiceMedia.com and is used by permission.