This is common sense, which isn't very common in government...

WASHINGTON, DC – According to reports, those on the left seemingly aren’t a fan of Republican Rep. Lauren Boebert’s proposal to have more time allocated for reading bills prior to Congress voting on them.

On July 28th, Rep. Boebert uploaded a video to Twitter where she detailed the suggested changes to how Congress should operate, as crafted by her and her fellow colleagues in the House Freedom Caucus.

Among those suggested changes to how Congress should function was a call for allotting a minimum of five days for House members to read bills before being able to vote on them.

“The practice of bringing forward bills in the dead of night and voting on them the same day has to stop. No more of Pelosi’s vote for it to find out what’s in it madness. Members should have five days to read and consider bills before voting on them. If it’s an emergency and needs to be passed immediately, the bill should require two-thirds support.”

Ironically, Democrat Rep. Alexandria Ocasio-Cortez has expressed similar sentiments in the past regarding the seemingly standard practice of being handed bills thousands of pages long and only being given hours to render a vote on them.

It was back in December of 2020 that Rep. Ocasio-Cortez took to Twitter regarding a COVID stimulus bill that wound up being bloated with a whole lot of non-stimulus related nonsense.

“This is why Congress needs time to actually read this package before voting on it. Members of Congress have not read this bill. It’s over 5000 pages, arrived at 2pm today, and we are told to expect a vote on it in 2 hours. This isn’t governance. It’s hostage-taking.” 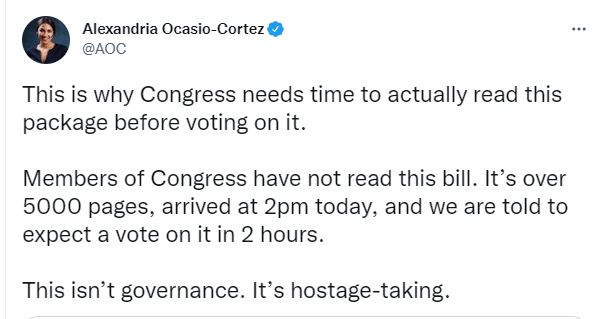 The reality is that members of Congress being afforded ample time to actually read the bills they’re voting on (which could eventually become law) shouldn’t be a partisan issue – but since the recent vector was Rep. Boebert, somehow it suddenly is.

Others took to Twitter to mock Rep. Boebert’s relatively reasonable proposal, with one person writing, “How about passing a law that high school dropouts aren’t eligible to run for Congress? I would go farther and say a bachelor’s degree should a minimum requirement, along with a civics test and a security clearance.”

There were also jabs at Rep. Boebert’s occasional use of social media and sporadic media appearances being used as a means to mock her suggestion, with one person writing, “I have a better idea. We should elect representatives who can keep up with their legislating work instead of getting distracted with media, fundraising and Twitter trolling.”

Obviously, the general consensus among leftists was that somehow being given a proper amount of time to read bills before voting on them is absurd.

Rep. Boebert responded to the criticism on July 29th, emphasizing that the outrage over her reasonable suggestion demonstrates just how Democrats want the government to operate.

“Democrats being outraged that I’m pushing to force a five-day period for legislators to actually read legislation before they pass it tells you everything you need to know about how they think government should work. Know what’s in the bill BEFORE passing it. Pretty simple.” 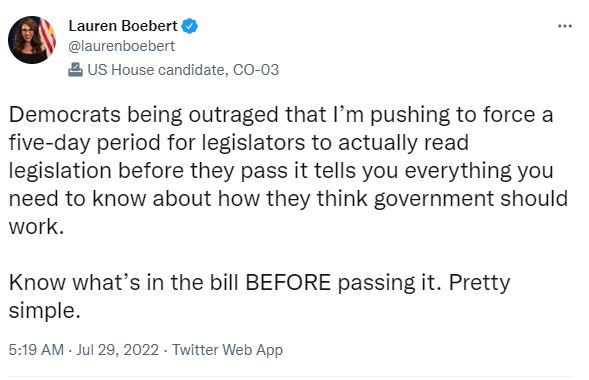 This piece was written by Gregory Hoyt on July 30, 2022. It originally appeared in RedVoiceMedia.com and is used by permission.