Leaked: J6 ‘Star Witness’ Thought The Hearings Were Bulls*it Before She Even Testified Text Shows

Is this considered a "prebunk" since she debunked herself ahead of time?

WASHINGTON, DC – According to reports, newly uncovered text messages demonstrate that the Democrats’ proclaimed “star witness” in the January 6 committee hearings didn’t hold the highest of opinions of said committee prior to her testimony before Congress – with Cassidy Hutchinson referring to her subpoena as “BS.”

The Daily Caller broke the story on the revealing text messages that shed a new light on what Hutchinson thought of her being roped into the January 6 hearings, which her testimony has already been marred by hearsay she presented to Congress that has since been contradicted.

As previously reported at Red Voice Media, Hutchinson testified before Congress on June 28th, spinning a tale of a second-hand account about an irate Trump on January 6, 2021, who became so angered with Secret Service Agent Robert Engel that he “reached up toward the front of the vehicle to grab at the steering wheel” when this Secret Service agent wouldn’t take him to the Capitol.

MORE NEWS: NYPD Officers Are Fed Up And Leaving

Hutchinson claimed that then-White House deputy chief of staff Tony Ornato relayed this incident to her, with Ornato allegedly telling Hutchinson that Trump lunged at Agent Engel with his other hand while trying to control the steering wheel.

However, this incident of which Hutchinson claimed she was told by Ornato has faced reasonable criticism – namely due to Ornato reportedly saying he told her no such thing. Additionally, the Secret Service reached out to the House select committee to inform them they’ll “make the agents involved available to testify under oath” and “are also prepared to say under oath that the incident itself did not occur,” according to a report from CNN.

But the controversy surrounding Hutchinson’s testimony has become all the more intriguing, as text messages reveal the former aide to then-White House Chief of Staff Mark Meadows was seeking the assistance of the First Amendment Fund regarding her subpoena to testify before the January 6 committee.

For the sake of context, the First Amendment Fund was started by the American Conservative Union (ACU) in response to those entangled in the weaponization of January 6th by Democrats, which the fund’s webpage specifically outlines their aim to assist “private citizens who have not been accused of any crimes and were simply engaging in free speech activities protected by the First Amendment.”

Prior to Hutchinson’s June 28th testimony, she’d texted an individual, asking, “Hey (redacted)! This is Cassidy Hutchinson. Kind of a random question, but do you still work for the Schlapps at the ACU?”

The individual replied, “Hi, yes,” which is when Hutchinson detailed her subpoena for the January 6 committee hearing and described the ordeal as “BS.”

“Do you happen to know a First Amendment fund POC I could reach out to? I was subpoenaed in early Nov., but the committee waited to serve me until last week (after Ben’s deposition).

“I had to accept service because the U.S. Marshalls came to my apartment last Wednesday, but I haven’t made contact with the Committee. I’m just on a tight timeline and just trying to figure out what my options are to deal with this bs.”

Later on in the text conversation, Hutchinson stated she didn’t want the January 6 committee hearings to be “unnecessarily elevated,” which is arguably a far cry from what transpired on June 28th.

On the day of her heavily disputed testimony, ACU President Matt Schlapp took to Twitter to make reference to her having previously reached out to the First Amendment Fund, adding that he was “pleased” said fund offered her zero assistance.

“Ms. Hutchinson approached [CPAC] for help through our First Amendment Fund which has helped J6 political victims defend themselves. I am pleased we did not assist her performance today. Relaying WH hallway gossip as fact does not qualify as first person testimony.” 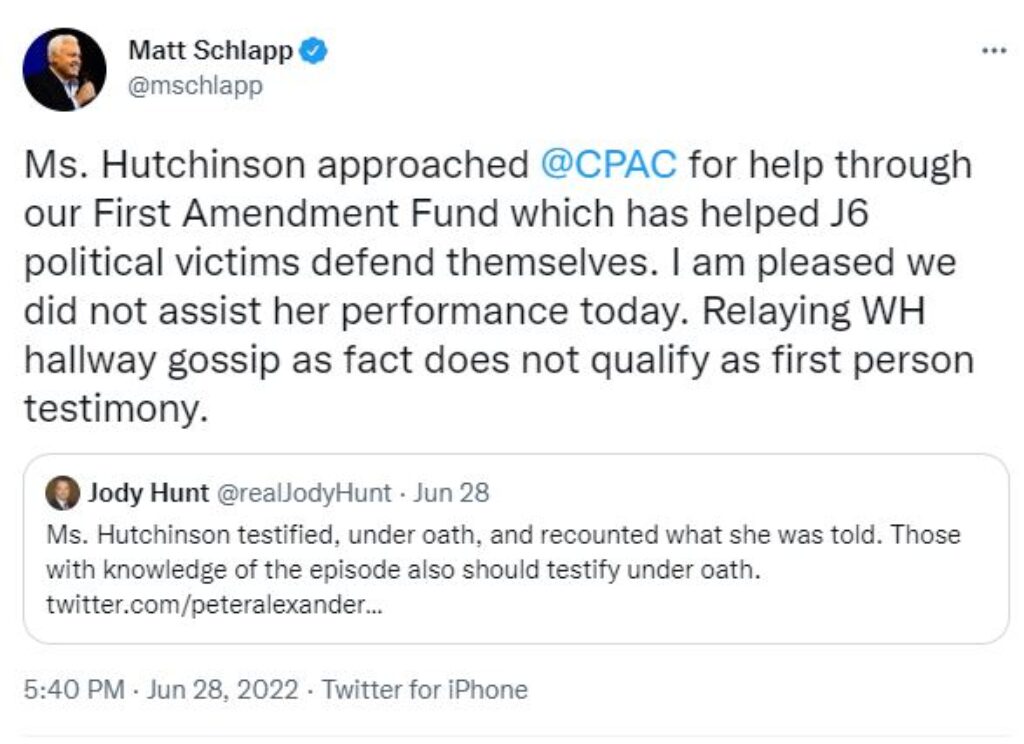 This piece was written by Gregory Hoyt on July 4, 2022. It originally appeared in RedVoiceMedia.com and is used by permission.

NYPD Officers Are Fed Up And Leaving

GOP Rep. Jackie Walorski’s Husband Of 27 Years Breaks His Silence After She Dies In Car Crash At 58