Libs of TikTok is receiving death threats but none of the accounts doing so have been banned...

A report from The Post Millennial details leaked internal messages from a Twitter employee’s Slack channel where some company employees were discussing about whether or not to permanently ban the “Libs of TikTok” account. Messages from this chat log also revealed the employees reveling over “successfully” deplatforming former President Trump.

The Libs of TikTok account has been extremely successful at peeving those on the radical left by doing nothing more than reposting already publicly-available content from TikTok and other social media platforms that showcases how ridiculous leftists can be.

Whether it’s a video of someone spouting off nonsensical “neopronouns,” or a teacher bragging about how they’re effectively grooming children with transgender ideology – Libs of TikTok has managed to throw the left into a hissy by simply holding up a proverbial mirror.

Taking the aforementioned into consideration, it’s of little surprise that the Libs of TikTok account on Twitter has been subjected to three separate suspensions for allegedly violating Twitter’s terms of service. However, newly revealed messages from a Twitter employee’s Slack channel show that employees at the company want them gone for good.

The allegations that were being leveled in these messages revolve around the same accusatory trope that the far left loves to claim, namely being that these Twitter employees allege that the Libs of TikTok account is operating exclusively to target “violence” against “marginalized people.”

One Twitter employee wrote, “This has been escalating for months…but our expectations out of Twitter are so low right now that the devil himself is having to squat to get to their level…Like I don’t get how this account, which exists solely to generate targeted violence at marginalized people, continues to be allowed to post.”

As the debate featured in the leaked messages continued, one Twitter employee voiced concerns that banning the Libs of TikTok account might serve as a mask-off dilemma that would expose their far-left bias.

“But if we deplatform this account we might erode trust in our platform from users who already think we’re irredeemably biased against conservatives.”

Another Twitter employee responded to that notion, remarking how they were able to “successfully” get rid of Trump on the platform and feels as though ousting Libs of TikTok wouldn’t have that hard of a fallout. However, this same employee conceded that such a tactic might not be in their “fiduciary” interests – clearly an allusion to the potential acquisition of the company by Elon Musk.

“I mean we successfully de-platformed Trump – I don’t think deplatforming Libs of TikTok is going to cause a mass exodus but I guess it may not be in our ‘fiduciary’ interest to enact a ban on a high profile account right now.”

Other Twitter employees continued in the hyperbole in the chat thread, with one writing, “Trans people are being targeted for genocidal violence during pride month,” despite Libs of TikTok doing no such thing ever.

Ari Drennen, the LGBTQ Program Director for Media Matters, posted a series of tweets on June 12th decrying the Libs of TikTok account, alleging that they’re “going to get somebody killed,” while using the real name of the woman who runs the Twitter account. 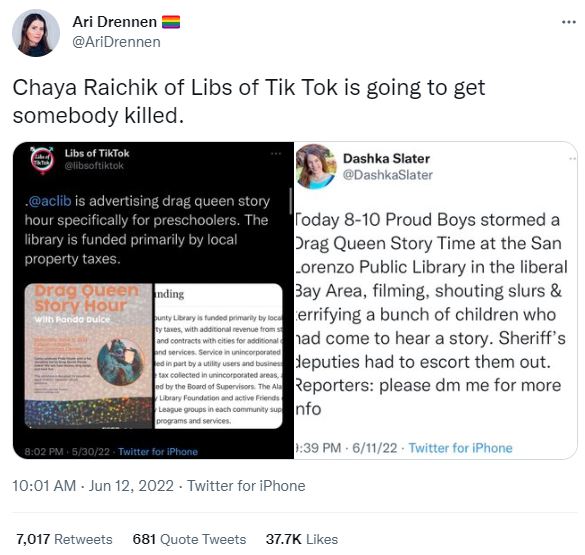 The irony is that in the wake of Drennen’s absurd posts about Libs of TikTok, Chaya Raichik has been the recipient of numerous death threats, many of them quite explicit in detail. The nature of the threats were so concerning that even Elon Musk responded to the thread asking Twitter why the accounts in question hadn’t been permanently removed for threatening to harm Raichik. 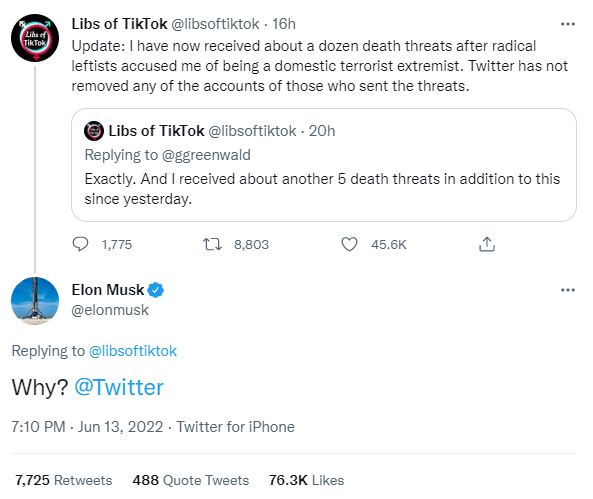 In the wake of these death threats being revealed, it appears as though some of the offending accounts were permanently suspended from Twitter, but it’s unclear if all have been resolved since the Libs of TikTok account only shared a handful of the received threats.

This piece was written by Gregory Hoyt on June 14, 2022. It originally appeared in RedVoiceMedia.com and is used by permission.