EXCLUSIVE: Veteran Fired For Sharing Quote About Homosexuality On Facebook

Following the 2020 election, both Republicans and conservatives have come under intense criticism for their values. It didn’t matter that liberal activists were supporting kindergarteners learning about sexual orientation and gender identity. Or the fact that numerous Pride events have featured drag queen story hour for children. The only problem in America, according to the Democrats, was racism and MAGA supporters who were labeled domestic terrorists. No to mention the massive wave of censorship at the hand of big tech. While many conservatives have been targeted, recently, a veteran found himself unemployed from Insperity after he shared a photo on his Facebook page about his beliefs on homosexuality.

Posting a quote from Pastor Voddie Baucham, as can be seen below, it said, “Don’t let anyone tell you that it’s not loving, if you stand flat footed and speak the truth about this issue of homosexuality. What’s NOT love is to look someone in the eye, when God says they are in jeopardy of an eternity in hell, and merely wink and nod at their sin because you are afraid of being called names. Speak the truth saints, amen.” 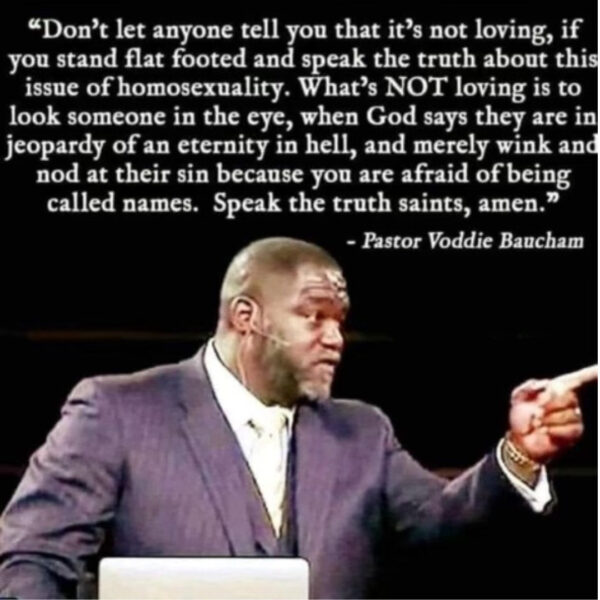 That statement alone led to Paul Benitez, again – a veteran, to be fired from his job at Insperity. For those who might not know the company, they promoted themselves as human resources that make a difference. On their site, the CEO, Paul J. Sarvadi stated, “We believe that every employee should be treated with respect and acknowledge that building a workplace that values the worth of each individual takes time, effort and dedication.”

As for Benitez, being fired didn’t stop him from standing strong in his beliefs as he uploaded the video below, discussing his termination and how it hasn’t remotely shaken his faith. The conservative even read from the book of John in the Bible.

It should be noted that Insperity considered itself to be a safe place for all employees, no matter their belief or background. The company wrote, “Our people are the heart of what we do. It is our goal to create an inclusive work environment where employees of all backgrounds value and appreciate each other. With over 3,600 employees, we are a diverse group of individuals pursuing a common mission: to help businesses succeed so communities prosper.”

Still, being a veteran, Christian, and conservative apparently wasn’t on the list of protected people at Insperity.