sharing a meme of a cartoon British soldier rubbing his bloody hands on his face with a caption that reads, “when you put he/him in ur bio.”

LOS ANGELES, CA – Elon Musk’s 18-year-old biologically male son has reportedly petitioned to legally change his gender to female, as well as change his full name. The radical move, according to The Gateway Pundit, is a means for Musk’s son “to distance himself from his father.”

CNN reports that Xavier Alexander Musk, who just turned 18 this year, petitioned a county court in Los Angeles back on April 18th, shortly after his birthday, asking for his legal name to be changed to Vivian Jenna Wilson, as well as legally changing his gender to female.

Xavier’s choosing of the last name Wilson is a means to take on the name of his mother, Justine Wilson, who is Musk’s ex-wife who’d had five of Musk’s seven children.

Apparently, Xavier informed the court that he no longer wants to be affiliated with his father “in any way, shape or form.”

While Xavier’s legal filing didn’t specifically list any reasons why he wants to distance himself from his father, numerous media outlets are speculating it stems from Musk’s past remarks on Twitter that poke fun at the nonsense encircling gender ideology.

Back in July of 2020, Musk took to Twitter, simply writing, “Pronouns suck,” which is an obvious allusion to the younger generation’s obsession with crafting neopronouns or adopting “preferred” ones that contradict their biological reality.

Six months later, Musk was back at it again on Twitter mocking the pronoun crowd, sharing a meme of a cartoon British soldier rubbing his bloody hands on his face with a caption that reads, “when you put he/him in ur bio.” 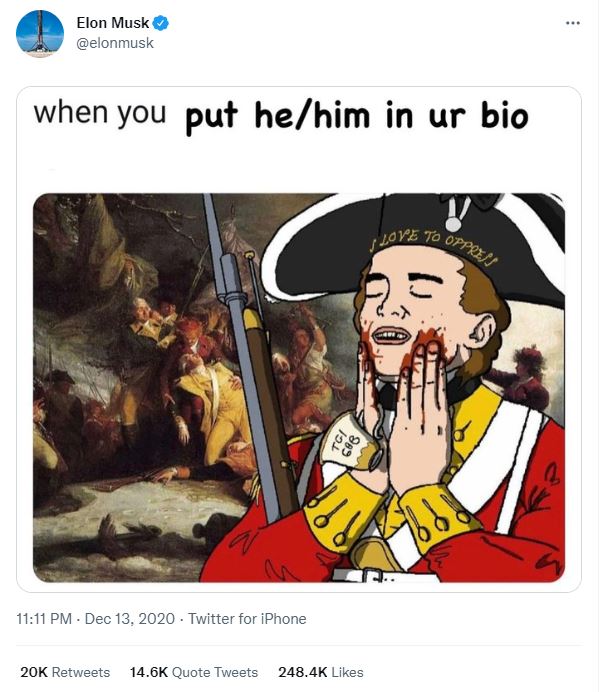 The outrage over the joking meme was so over the top that CNBC crafted an entire article dedicated to lambasting the December 2020 Twitter post by the Tesla CEO. Even after Musk clarified that he supports the transgender community, “but all these pronouns are an esthetic nightmare,” the Human Rights Campaign (who had listed Tesla as the top place to work for the LGBT community) demanded that he issue an apology.

“Elon Musk’s tweet mocking pronouns is exactly the opposite of what inclusive leadership looks like today. It’s also decidedly out of step with the best practices we advise companies.”

With respect to Musk’s son working to change his name and gender through the California courts, the SpaceX CEO has not yet publicly commented on the matter.

While it is unclear whether Musk was aware of his son’s endeavors that began in April, considering the proliferation of reports regarding Xavier’s exploits to change his name and gender so as to no longer have any ties with his father, it’s highly likely that Musk is – at least now – aware of the matter.

The hearing for the requested name change is slated for June 24th.

This piece was written by Gregory Hoyt on June 21, 2022. It originally appeared in RedVoiceMedia.com and is used by permission.

I am making $92 an hour working from home. i was greatly surprised at the same time as my neighbour advised me she changed into averaging $ninety five however I see the way it works now. I experience mass freedom now that I’m my non-public boss. That is what I do.. http://www.profit97.com

Two Voices On The Biden Economy