"The UN may have introduced ESG ratings, but today the World Economic Forum is one of ESG's biggest supporters."

Going against the usual rhetoric of billionaires helping support organizations like the World Economic Forum, which was created by billionaire Klaus Schwab, SpaceX CEO Elon Musk has sent waves through the group of elitists who meet annually to discuss where the future of humans is heading. Most recently, Musk addressed the economy in America and was hesitant about what lay ahead, given the current leadership in D.C. Not only were his words met with criticism, but he also targeted the ESG index after Tesla was dropped. He admitted, “ESG is a scam. It has been weaponized by phony social justice warriors.” On top of attacking the ESG index, the Biden administration, and the WEF, it seems Musk isn’t remotely slowing down as he implored as to why the Department of Justice hasn’t released the client list of both Jeffrey Epstein and Ghislaine Maxwell.

On Saturday, the CEO jumped on Twitter to share the image featured below, that depicted several things Musk would never see in his lifetime. The picture showed a dinosaur, unicorn, dragon, and of course, The Epstein/Maxwell client list. Musk also wrote, “Only thing more remarkable than DOJ not leaking the list is that no one in the media cares. Doesn’t that seem odd? Sometimes I think my list of enemies is too short, so.” 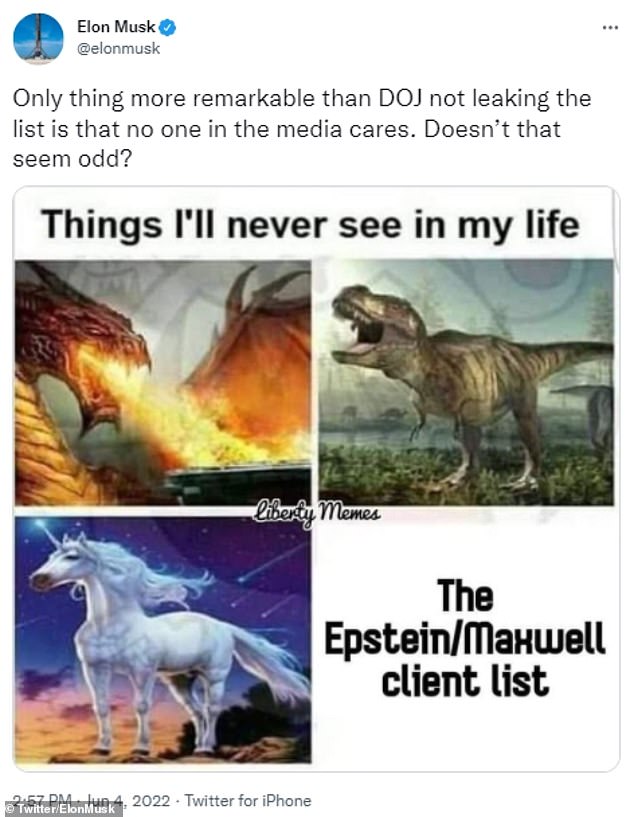 As mentioned above and can be seen in the video below, Musk hasn’t been silent about many of the injustices being seen in America. Not that long ago, the billionaire caused Democrats to become enraged when he moved to buy Twitter for a staggering $44 billion. The Democrats quickly discussed the dangers of letting one person control an entire social media platform. Very much like Mark Zuckerberg.

Since being shared on Gawker in 2015, the infamous black book of Epstein has caused many to speculate exactly who he was working for before his arrest and mysterious death. Just a few names found in the book included both former President Bill Clinton and Donald Trump. Also making the list was also Ivanka, Trump’s daughter, as well as his ex-wife. Other names included John Kerry, Henry Kissinger, and even Hollywood icon Woody Allen.

It should be noted that there has also been a picture of Musk and Maxwell being shared online. Musk addressed the photo, writing, “Ah yes, Maxwell photobombing me at a @VanityFair’s Oscar Party – you should ask them why they invited her.”

After Musk warned about the economy and even suggested shrinking the staff at Tesla, President Joe Biden sought to take a jab at the billionaire, wishing him a great journey to the moon. “Well, let me tell you, while Elon Musk is talking about that, Ford is increasing their investment overwhelmingly. I think Ford is increasing investment in building new electric vehicles, 6,000 new employees, union employees. I might add, in the Midwest, the former Chrysler corporation, Stellantis, they are also making similar investments in electric vehicles. So, you know, lots of luck on his trip to the moon.”

This piece was written by Zach Heilman on June 5, 2022. It originally appeared in RedVoiceMedia.com and is used by permission.

We’re now living in the Twilight Zone. All hands on deck or we’ll sink like the Titanic without a trace in sight

I think I like this man more and more. He’s nobody’s dummy!