RALEIGH, NC – The operations manager of a Raleigh-based food bank says that the food bank is “definitely being impacted” by the ongoing shortage of baby formula nationwide.

Earlier in May, Fox Business reported on “the country’s baby formula shortage” that has cropped up recently. In late April, social media posts began to spread that created awareness to the growing problem of store shelves being near-barren when it came to the baby formula aisle.

On April 27th, one parent shared a picture on Twitter of one such store shelf, claiming that it wasn’t just an anomaly at that particular store but an issue at “every store” in her area.

“If the [mainstream media] can talk about the toilet paper shortage [every] hour, they should be talking about the baby formula shortage at least…we ended [up] finding the Amazon brand online but not everyone is so lucky to be able to feed that [type of formula]. Please share. This is every store!” 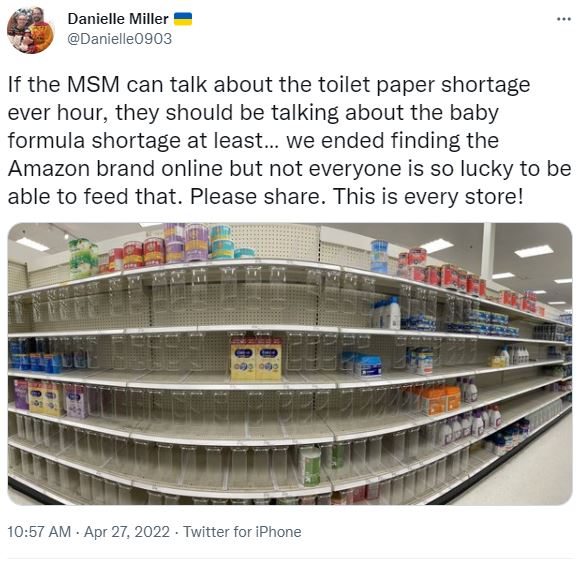 One mother out of New York spoke with Fox Business about the growing issue, detailing that her newborn had been losing weight post-birth and that she personally couldn’t produce enough breastmilk to keep up with the infant’s dietary needs.

“When we ran to the local Target one day to get some [formula] just days after she was born, the shelves were completely empty. My heart literally sank.”

This mother added that she was lucky enough to get some formula ordered online but added that “not everyone has been as lucky” due to certain infants requiring very specific formulas that are proving difficult to find.

“Our neighbor said her family member can’t find the sensitive type of formula for their newborn who has stomach issues anywhere. They’re in a panic daily not knowing if they’ll be able to feed their newborn tomorrow or the day after; my heart breaks for those parents.”

With parents having difficulty locating baby formula, food banks are of course enduring the same dilemma as well. Derrick Williams, who oversees operations at the Food Bank of Central and Eastern North Carolina in Raleigh, claimed that the scarcity of formula in tandem with various recalls have impacted their supply.

“We have seen very little baby formula, and we have had recalls on some baby formula. If we do get it at all, we have to make sure it hasn’t been recalled.”

Williams added that overall inventory at the food bank has been getting impacted by an amalgamation of things such as inflation and supply chain issues.

“Because of food chain shortages, inventory is not what it used to be…When the pandemic was at its height, we were getting a lot of food commodities from the government – but that has stopped…We’re at a decrease now. We are still able to operate, but there is not as much as there once was.”

This piece was written by Gregory Hoyt on May 8, 2022. It originally appeared in RedVoiceMedia.com and is used by permission.