It comes down to energy.

This publication has been generally satisfied with the Biden administration’s response to the war in Ukraine, a war it brought on by its own weakness and incompetence. The situation was the same, a weak administration, in Crimea in 2014.

But there is a growing issue regarding loopholes in the sanctions. The Russian banks not sanctioned are those that deal in energy finance. To make matters worse, the Biden administration refuses to increase American energy production to make up for rising oil prices, Russian energy power, and Russian energy blackmail of Europe.

In fact, the financial investments in Russia and Ukraine of Biden’s own family come into question here. The necessary moves are obvious. Put the Keystone Pipeline back on line and begin again the process of American energy independence through production and new drilling. Some understand this.

MORE NEWS: Top Strategist To Hillary Clinton Suggests She Not Run Again In 2024

Rep. August Pfluger, R-TX, argues that we must “regain our dominance on the world stage…The Permian Basin is the most prolific production area in the entire world,” Pfluger said. “We must unleash and innovate to make sure the production continues to be strong, that we regain our dominance on the world stage in the oil and gas we supply, not only for our domestic needs but also our partners and allies so that they’re not dependent on maligned actors like Russia and China.”

But the Biden administration lets Russia fund its war through energy profits, permits Russian banks to operate with impunity through loopholes designed to favor Russian energy, and refuses to make America energy independent once again. This must change.

Our Man in Riga: “Had dinner last night with a Baltic Russian couple. She works for a bank, he is a coach for one of the soccer teams. Imports to Russia about to be interrupted due to drop in value of the ruble. Other sanctions to be of less value due to Russian self-sufficiency. Situation in Kyiv very unclear. Reporters sent to airport to talk to defenders asked where the Russians were – Respondent guard said “We ARE the Russians.” News organization didn’t know it had been captured. Guards at Chernobyl were told to continue their duties after Russian seizure, told they would be paid regardless…Adazi, where the US 1st Infantry is based, has a HUGE maneuver area (our guest had been stationed there in the 70s with the Red Army)… A lot of people here have relatives and friends in one or both warring countries. Still have telephonic contact with both countries…One other thing: All Baltic States have closed airspace to Russian aircraft. Russian flights to Kaliningrad must go from St. Pete into the Baltic and hook around into Kaliningrad. Friends – and wife – Hell, what am I talking about – and ME – worried about these idiots shutting off land access to Kaliningrad. As I pointed out last night, if you want to see Russian T-80 tanks that’s a pretty good way of making sure of it. Excessive virtue-signaling comes at a price.”

So, the rumors are true. He’s Covid crazy. 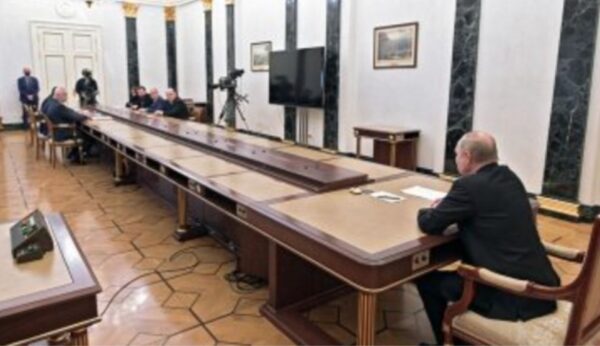 Ivan gets hacked by Anonymous. FNC: “The websites for the major Russian state-owned news agency, TASS, the Russian nationally distributed newspaper, Kommersant, and the daily broadsheet newspaper, Izvestia, which was founded in St. Petersburg during the Russian Revolution and was one of principal media outlets in the Soviet Union, all displayed a message signed purportedly by the notorious hacking collective Anonymous.”

Ukraine has performed well, but Russians still have a tactical advantage due to force size. “It is nothing short of remarkable what the Ukrainian military has accomplished,” said retired U.S. Army Gen. Jack Keane. But numbers will tell.

Ukrainian negotiators have arrived in Belarus, as Belarus may send troops into Ukraine to aid the Russian invasion.

The Ukrainian delegation arrived in the area of the Ukrainian-Belarusian border to take part in talks with representatives of the Russian Federation ➡️ https://t.co/RKxx6801eh

MORE NEWS: Howard Stern Suggests He Is Running For POTUS In 2024 Over Roe V. Wade

We’re out of Belarus. The State Department “authorized the voluntary departure (“authorized departure”) of non-emergency employees and family members at our Embassy in Moscow, Russia. We took these steps due to security and safety issues stemming from the unprovoked and unjustified attack by Russian military forces in Ukraine,” said Secretary of State Antony Blinken.

Kharkiv is undergoing massive shelling. Many casualties. “Kharkiv has just been massively shelled with Grad multiple rocket launchers. Dozens of dead and hundreds of wounded! This horror must be seen by the whole world! Death to the occupiers!” Ukraine Defense official Anton Gerashchenko wrote on Monday.

Republican leader and prospective 2024 presidential candidate Ambassador Nikki Haley commented on the Ukraine war. “Heroism is contagious. The heroism of Ukraine’s people and leadership is inspiring the free world to support their cause…Spontaneous pro-Ukraine demonstrations have sprung up all across the world. European governments that didn’t want to be involved are now sending weapons to Ukraine.”

A Ukrainian archbishop has a view to the nature of Vladimir Putin. “Putin is really not messiah, but really anti-Christ of our current time,” Yevstratiy Zoria, the spokesman for the Ukrainian Orthodox Church, told the BBC.

I get paid over $190 per hour working from home with 2 kids at home. I never thought I’d be able to do it but my best friend earns over 15k a month doing this and she convinced me to try. The potential with this is endless .Here’s what I have been doing…  http://www.cashoffer9.com

The Archbishop’s condemnation of Putin as “the Anti-Christ” is quite startling. If we look closely at the cadence of Putin’s actions over the past few months, weeks, days, it appears that he has ever-so-slightly opened the throttle on major moves, increasing the rapidity such as what we’d expect to see of a man aware that he is getting old, losing his final opportunities to leave an historic legacy, and watching his own relevance wane. It is the kind of desperation that could force one to lash out in one final blaze of glory. Keep an eye on this.

Hidenbiden,the pathetic, arrogant,narcisist, spineless,embarrassment, is the cause that the Ukrainians are being slaughtered, for not sending them what they need to defend themselves.We know why now, because of his crackhead’s son and his involvement, in Ukraines energy during the obuthead administration, enough evidence, of corruption, to have this senile,frail,old,puppet fool removed from office.

My understanding is that the reason Putin is in a position to go forward with his ugly adventure is that the USA went from being energy independent and providing energy to some of Europe to needing to import energy for our own needs and very suddenly. Anyone think that was a well-thought out plan that was to benefit the people of the USA Ukraine folks certainly didn’t find it helpful to their country when Putin suddenly had huge funds from his oil industry . . . including selling oil to the USA! to go forward with something the KGB agent had yearned to do for along time. What a mess – Americans seem beyond stupid – yes, I include my self. How did I and my generation get so comfortable and at ease that we didn’t see an insidious serpent taking over our country. It isn’t that they want to be a part of the American dream, they want to get in power and stay in power – by hook or by crook – ???!! and become part of a one-party system with all of the loss of freedom that denotes!!. God help us and Please be with the brave, freedom loving Ukrainians!

You bring up a scintillating point: Biden family investments in Russia and the Ukraine. When a president puts such personal interests forward, in front of defending the democracy of a friendly country, you know we are doomed in our own country with a unconstitutionally placed, illegitimate president. Putin knows better than most Americans the Biden interests that lay at stake. With this insider knowledge, he has strategic advantage. The damages this illegitimate president is incurring on the U.S. are far-reaching and long-lasting. Again, even this action in the Ukraine can be traced back to a feckless, useless Not-So-Supreme Court. It had the opportunity to set right a terribly obvious election result and establish a piece of American history. Instead, it failed by shirking its responsibility. This fact will haunt that institution forever and in increasing circles.

If you are forgetting about the Biden collusion in Ukraine, this is your reminder. Ukraine also is a human trafficking deep state. Let’s hold these people responsible. So far Russia has not really used even 1/2 of its power against Ukraine. Hummm. Why not? Yet Canada, another child trafficking location installed “Militant” and covert solutions to quell a legal “peaceful” protest. We have yet to find out what our own “deep state” will pull to quell our own “legal” peaceful citizen protests. Wonder how many times Russia has been the “fall guy” for other covert underpinnings of events.
Is the US here…We can’t see the forest for the trees.

Howard Stern Suggests He Is Running For POTUS In 2024 Over Roe V. Wade