None of it really adds up, does it?

Among the numerous narratives presented around the Capitol Hill riot, the one that seemed to surprise most Americans came from Vice President Kamala Harris. Claiming to have been inside the building during the supposed riot, Harris would recall the events of that day on the one-year anniversary, at which time she bravely compared it to both Pearl Harbor and 9/11. But while her comparison was grossly exaggerated, it appears there are several pieces to Harris’s story that don’t add up, starting with her exact location.

Up until January, Harris was always believed to have been inside the Capitol building. But, thanks to an article written by Politico, the Vice President seemed to be in two places at once. According to the piece, Harris was at the DNC, which was the location that a pipe bomb was supposedly placed. 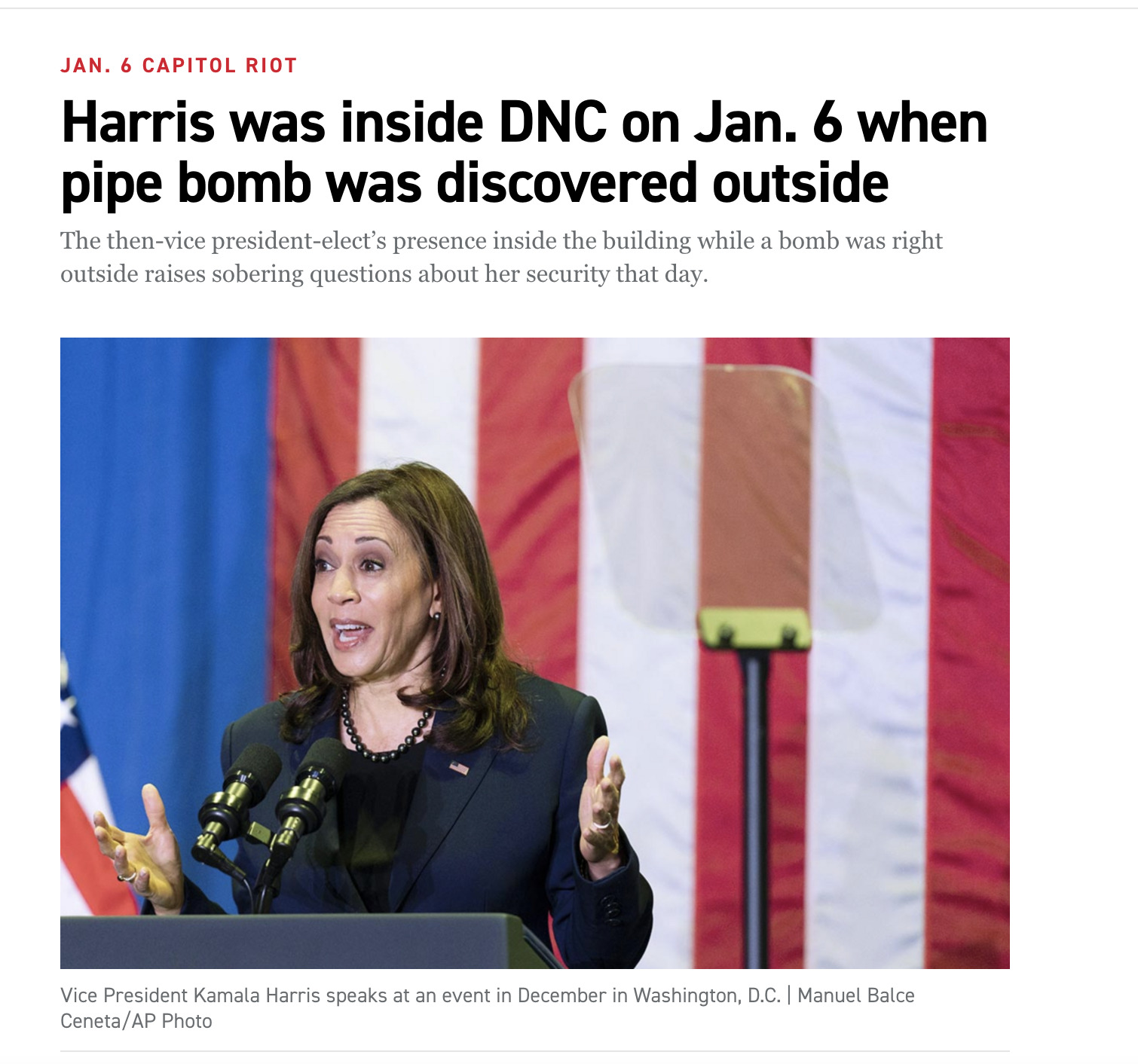 This small detail about Harris’s true whereabouts on that day led Fox News’ Tucker Carlson to wonder why she wouldn’t divulge such information given her party’s strong stance on it being an attack on democracy. In the video below, Carlson said, “It would’ve been the perfect moment for Kamala Harris to tell us that she herself came within mere feet of a racist insurrectionist bomb.

“’They literally tried to kill me!’ is something that one could easily imagine Kamala Harris saying. This is a person who puts herself at the center of every story, who invent stories in order to put herself at the center. This is the person who told us she was at a civil rights protest as a toddler. But she never mentioned that, that she was right near the bomb. In fact, she continued to hide that fact. It’s completely bizarre. What’s going on here?”

But it wasn’t just Harris who caught the eye of Carlson. It’s not breaking news that hundreds of protestors are facing charges for the part they played on that day. Yet, no actions have been taken to catch the person who planted two pipe bombs at the DNC and RNC. “Weird. People who plant bombs are almost always caught, because there’s a lot of physical evidence. This physical evidence was in pristine condition. But this person hasn’t been caught. This person, an amateur wearing Nike sneakers, has confounded the entire FBI crime lab and eluded the largest manhunt in American history.”

With none of the details adding up, Carlson was left to wonder, “It is fair to assume that if Kamala Harris hadn’t gone to the DNC when she went, the pipe bomb would not have been discovered just minutes before the insurrectionist breach at the Capitol. In other words, if Kamala Harris hadn’t been there, the bomb couldn’t have been the diversion that the Capitol Police Department said it was. It’s all pretty mysterious actually, and maybe the weirdest [thing] of all is that the FBI has only released 3 minutes of the video showing the person who planted the bomb. Why not release more tape? …Something is going on here, there’s no question about that, because the story doesn’t make any sense.”

This piece was written by Zach Heilman on February 10, 2022. It originally appeared in RedVoiceMedia.com and is used by permission.