On Wednesday, January 5th, approximately 5,000 passionate and peaceful protestors marched to the New York Capital in Albany, protesting the overreaching vaccination and masking mandates. The rally was conducted in response to the New York governor’s decision to extend the mask and vaccine requirements to February 1st. 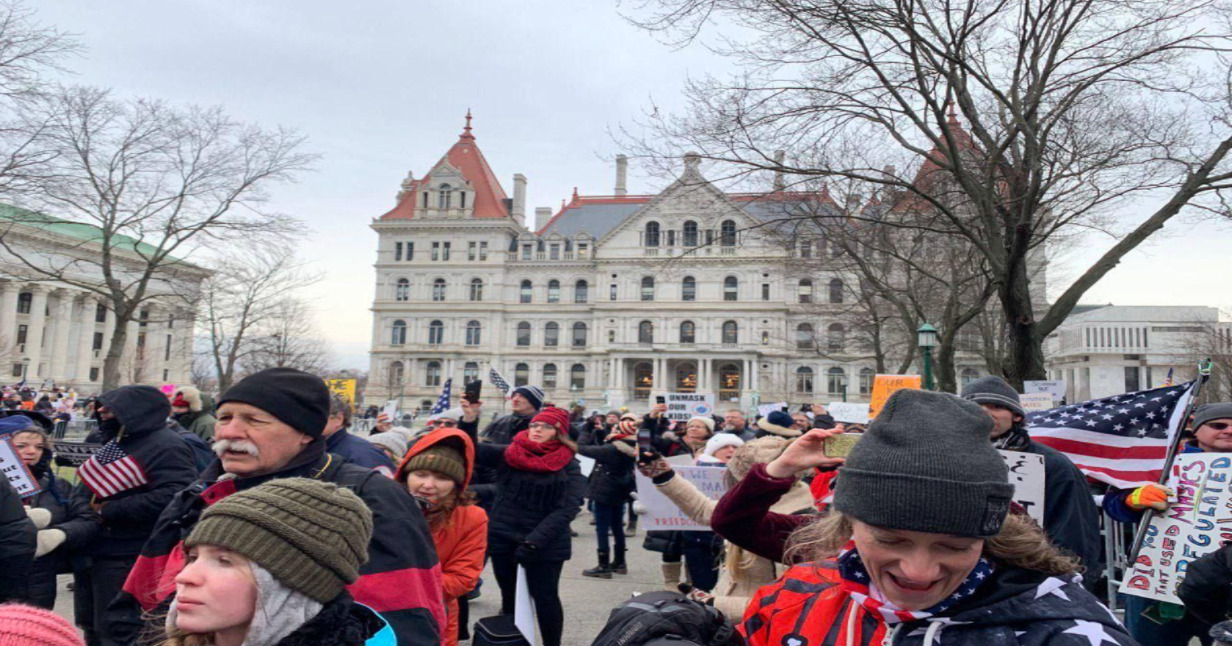 The rally was accordingly titled “Show Up Strong,” as the large, boisterous crowd marched and cheered. William Castro, New York Department of Education Administrator – who received a religious exemption – stated, “Freedom fighters across New York band together against governmental tyranny and push for medical liberty”. Though the rally focused on the entirety of the unconstitutional mandates, numerous individuals possessed posters and signs expressing specific concerns for child vaccination. Catherine Carr, a nurse who lost her job due to vaccine refusal and an attendee of the rally, claimed she saw many mothers with their children actively protesting at the rally, the mothers, Carr states, in a “momma bear mode”. In accommodation to these acts and signs, a copious number of American flags decorated the crowd, all being held high. The rally seems to have begun as groups gathered to form the march, which proceeded towards New York’s Capital in Albany.

#HappeningNow at the state Capital building in Albany. 1000s of protesters against mandates gather to demand all mandates get lifted #ny #VaccinePassports #protest pic.twitter.com/qPKv9Ptnuq

Once at their destination, the march halted and continued their protest at the Capital, with a small band performing at the steps of the building. The crowd cheered and sang along to the band’s performance while maintaining a respectful yet energetic atmosphere. Michael Kane, a special education teacher, and speaker at the rally, said, “the energy was fantastic,” and that despite the hostile and freezing weather that day, citizens found refuge amongst themselves as the crowd huddled close for warmth, proceeding to be outspoken in defense of their rights. According to Kane, five other speakers could not attend the rally due to traffic conditions. Regardless of the climate threats many faced that day, upwards of 4,000 protestors felt the need to attend the rally. Kane claims this is a sign that people are “coming to their senses” and that it is time to have a reasonable optimism about the future. As a speaker at the event, Kane had the pleasure of welcoming other speakers to the center stage, presumably at the foot of the Capital. New York Transit and Labor Leader, Tarmell Thompson – who is fully vaccinated – was called onto the stage and upon arrival, he ripped his COVID vaccination card to pieces in front of the crowd.

State of the Union adress, held in Albany by New York Governor Hochul is scheduled to start in a few minutes.

In direct retaliation to the outspoken individuals demanding their rights be respected and maintained, the Medical Society of the State of New York stated on the 5th, “MSSNY continues to be grateful for the science that has made the COVID-19 vaccines a reality.” (MSSNY, 2022). This statement continued with, “We unreservedly support the COVID-19 vaccine mandate for all healthcare workers,” and “With new cases in children in the U.S. continuing at a high level, we encourage parents to vaccinate their school-aged children.” (MSSNY, 2022).  Instances like the “Show Up Strong” rally and officials within the MSSNY combating each other are testaments that American citizens are having to demand that their constitutional rights be recognized. Even with these pressing forces, Carr states that “It may not look like we’re winning, but we are,” as she referenced how many lawsuits are being filed against the mandates and won. Our rights are precious, as is the capability to believe in the Lord Jesus Christ, which was bestowed upon us so that we may glorify Him. Let our eyes be on the Lord as we find a resting place at His feet, and may we utilize our divine rights to glorify and uphold His Truth in these challenging times.

This piece was written by Lauren Witzke on January 7, 2022. It originally appeared in RedVoiceMedia.com and is used by permission.