They're now censoring the 'experts' they told us to trust.

The main push by numerous governments around the world to defeat the coronavirus has been promoting the COVID-19 drug. When the shot was first made available, it was promised to be a one-and-done deal. That quickly jumped to two shots, and now, according to the government standards, a person is in full compliance if they have received the two doses and booster shot. With having to take up to three shots to be protected, those labeled as “vaccinated” are still spreading the virus and contracting it. And as the new Omicron variant spreads around the world, it appears companies like Pfizer are already looking at even more jabs.

While Pfizer might be hoping to introduce yet another shot into their growing arsenal, the European Union’s drug regulator recently expressed concerns about adding another booster shot and what that could do to the immune system.

In the video below, Marco Cavaleri, the head of vaccine strategy for the European Medicines Agency (EMA), said, “We have not yet seen data with respect to a fourth dose. We would like to see this data before we can make any recommendation, but at the same time, we are rather concerned about a strategy that [involves] repeated vaccinations within a short term.” He would later add another booster, “could be considered as part of a contingency plan,” but ultimately, “repeated vaccinations within short intervals will not represent a sustainable long term strategy.”

Cavaleri would also discuss the idea of implementing booster shots in 4-month intervals, stating, “we will end up potentially having problems with immune response and immune response may end up not being as good as we would like it to be, so we should be careful in not overloading the immune system with repeated immunization.”

Although the EMA is taking the most logical step by waiting for more data on the subject, apparently, big tech didn’t find the words of Cavaleri or the members of the EMA to fit into the narrative being pushed by the Biden administration. Trying to share the news and video of Cavaleri’s speech, which can be watched in its entirety above, Twitter was caught censoring the information from being shared. 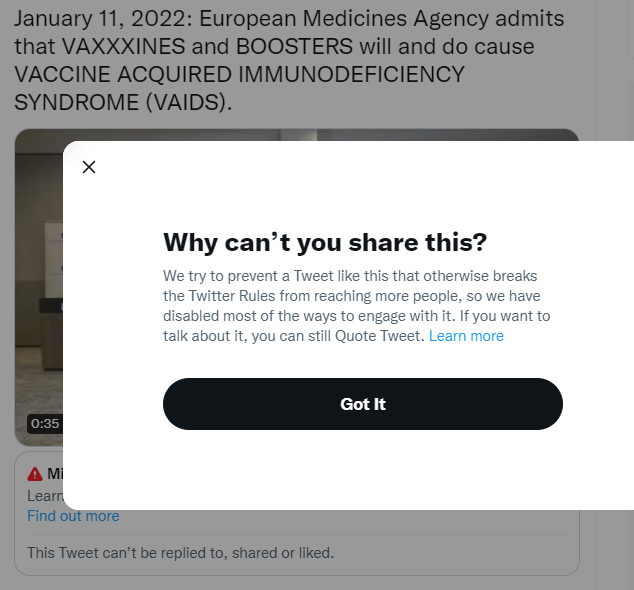 This piece was written by Zach Heilman on January 13, 2022. It originally appeared in RedVoiceMedia.com and is used by permission.

One Year Of Biden. Where Are We?