Kamioner: Christmas In The City

It's good, but you can see the fear.

Came up to Philadelphia to spend Christmas Eve with the family, per tradition. Checked into to a hotel right off Rittenhouse Square Wednesday afternoon and, after a bartender at a hotel wine reception offered me a Chardonnay, decided to go out by myself for a night on the town. I was in by 830.

Men like me, in their early 60s who usually have a full work and social dance card, don’t do this often if at all. When I was younger and single this would happen if I was bored and occasionally the evening results were fun. But now, with a nice residence, a full social calendar, and a superb girlfriend, it seems silly to go out alone for fun. However, this close to the holiday all my Philadelphia chums were booked and the galpal was under the weather. So here I was. 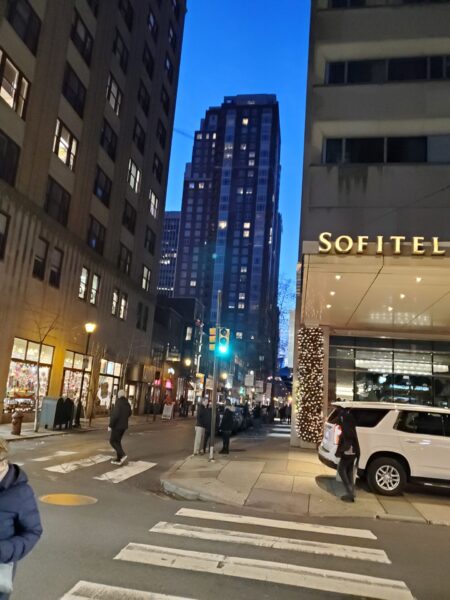 The hotel was nice enough, though rooms bizarrely laid out. Mask fascists, of course. There is one odd thing. It seems the choice of ambient music for hotels trying to be hip is early 60s R&B/shag. One would guess they are trying to convince upscale whites they are as cool as Otis Day and the Knights. That is a doomed proposition.

First place I chose for the quaffing was across the street, the bar at the Sofitel. Nicely appointed and good bourbon selection. Though I always start out with beer. Then I made my move to what I thought was an evening at the cigar lounge at Holts. It was not to be. I lived here for five years in the early teens. Knew every decent joint in town. But it was the first time I’d gone drinking in Philadelphia since Covid. The scene was sad as hell and proof of Wolfe’s adage that you can’t go home again.

Alma de Cuba on Walnut, best Cuban restaurant in the city, closed permanently, a victim of Covid. Pod, a stylish and delicious sushi restaurant in University City, closed. First floor cigar lounge at Holts, gone, a victim of absurd PA masking requirements and an authoritarian governor. At any rate, what I saw on the streets was worse than that. I saw fear. Pure, cold, relentless fear.

In a friendly city that used to be New York without the pretensions, passing me by on Walnut Street were dozens of people with masks on. Some had such elaborate Covid getups you’d like they were trekking through plutonium. Their eyes darted about like scared gazelle gingerly scoping out a savanna. Gone was the easy gait of the metropolitan city dweller. These people are scared. Scared of Covid, scared of climate change, scared of prices, and by and large scared of life.

How can I tell? As a writer it’s my job to notice. But I also got professional confirmation. Thank God the small bar at Butcher and Singer is still open. There, the bartenders see and hear everything and make a great old fashioned. 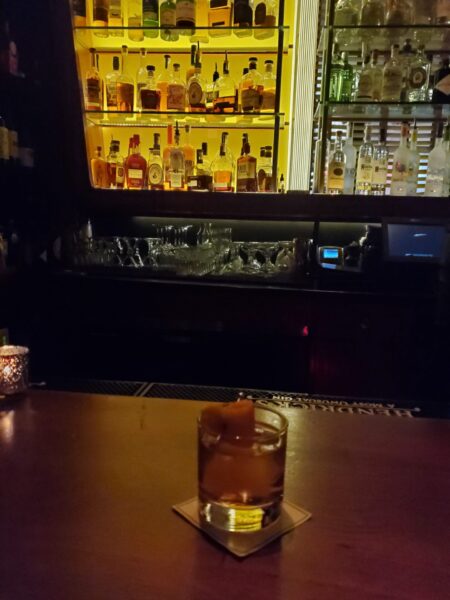 If you’re looking for a grownup bar and restaurant in Philadelphia, this is it. Excellent food, superlative early 60s jazz, and an atmosphere that says Sam and Darren Stevens drop in for cocktails on a regular basis. The bartenders, whose names I withhold by request, tell a story.

They say it’s been this way since the summer of last year. People wearing masks sitting at the bar or eating at their table, pulling up their masks momentarily to drink or eat. Discussion not of work or members of the opposite sex, but of vaccines and mandates. This is not just here, it’s all across the city. Covid, at least for now, has ripped the guts out of Philadelphia. That contagion of fear, much worse for a great city than a chuffed up flu with a 97 percent recovery rate, pervades even Christmas Eve eve. So, back to my hotel I go.

Maybe the bar hopping thing is way past my time anyway. Could just be I’m too old and jaded for this game. Though, it would have been nice to effortlessly glide into my carousing dotage, not get pushed from behind by a Chicom biowarfare glitch…And a Merry Christmas to you too.

Dems rerunning 2020 playbook & Im NOT playing.
We know more about Omicron vs Covid & lets get moving ahead]