My hero H.L. Mencken said, “No one in this world, so far as I know—and I have searched the records for years, and employed agents to help me—has ever lost money by underestimating the intelligence of the great masses of the plain people. Nor has anyone ever lost public office thereby. The mistake that is made always runs the other way. Because the plain people are able to speak and understand, and even, in many cases, to read and write, it is assumed that they have ideas in their heads, and an appetite for more. This assumption is a folly.” And that brings us to this little charade, the American Freedom Tour.

One of our readers, we have agents everywhere there is a mockable political gathering, is attending this weekend fest in Florida. This person prefers anonymity. No wonder, as they are having good fun watching the assembled goobers pay up to this amount for tickets. 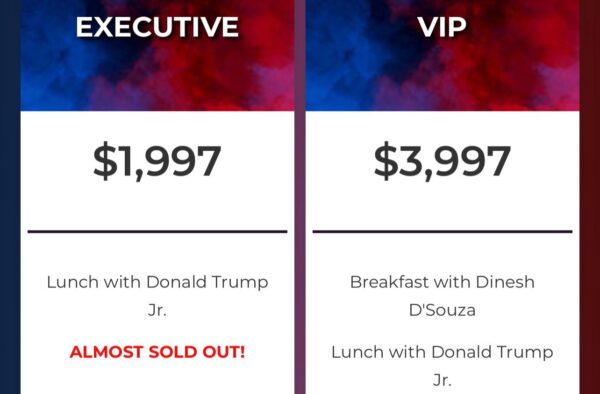 Apparently this gets them, according to one source, “Today was a big nothing burger and did absolutely nothing productive for the GOP at large”.

Another source opines, “No big headliners spoke on day one of the event as no agenda or literature was even provided to those in attendance. Some of the ticket packages included breakfast and lunch with certain speakers, but those ticket holders had no idea when or where to show up for what they paid for. Some of the tickets even went to ‘buy one get one’ pricing after many had already paid full price. Many of the speakers of the event on day one were not included on the flyer which solicited sales for the event. Some speakers included a presidential impersonator, Miss Universe, a social media software salesperson, and a guy speaking to the audience about buying covered calls in the stock market. Some of the speakers offered a special price for their courses for a discounted price at the conclusion of their talk. Other speakers were those that someone could see and visit with during a monthly meeting at their local GOP office.”

And yet another customer, who paid $4K to attend, commented, “It felt a lot like winning a free cruise if you sit through a sales pitch, but in this situation, we had to pay for the cruise on top of it.”

This is a scam. Events like the American Freedom Tour offer true believers proximity to their ideological heartthrobs for a big price and then stuff in get rich quick pitches by carnival barkers who target the sad and lonely. 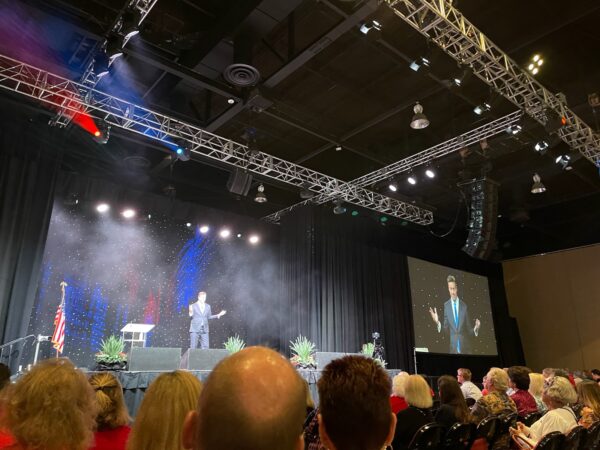 Some legitimate conservative stars like Don, Jr. and Dinesh D’Souza give of their time and appear at these cattle calls. That’s odd, as they have so much more credibility than the event itself.

If, as Barnum said, “a sucker is born every minute”, then the organizers of this vulgar revival meeting saw their pigeons from a mile away and plucked them but good. Such are the liabilities of being a true believer and letting gullible emotions, not cold eyed analysis, dictate your choices in political event attendance. Especially in events that can cost $4K to get into.