Scamdemic... all for the fear factor to gain more control over the people?

While the GOP continues to dissect every movement of Dr. Anthony Fauci, the Democrats don’t really need the doctor when they have statistics on their side. One of the most powerful images is seeing the death toll of COVID-19 on the daily news. And with each passing hour, the number appears to rise. But according to numerous public officials in Colorado, the COVID-19 death count is skewed due to people dying directly from COVID-19 and those testing positive from the virus before death.

Talking to “Full Measure” host Sharyl Attkisson, Brenda Bock, county coroner for Grand County, said she once processed a murder-suicide case before it was changed. According to Bock, “the very next day, it showed up on the state website as COVID death. And they were gunshot wounds. And I questioned that immediately because I had not even signed off the death certificates yet, and the state was already reporting them as COVID deaths.” 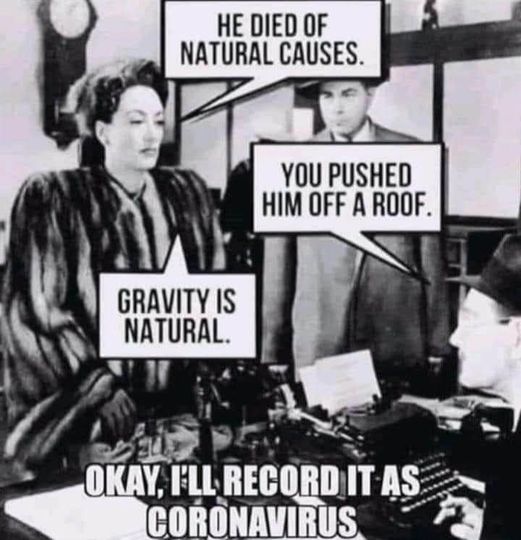 Although strange, that wasn’t the only case Bock had to reference. She also talked about another case where two people were counted among the casualties of COVID-19 but were very much alive. “Two of them were actually still alive. And yet, they were counting them. Had I not called them on it and asked them who those were, where were they from, all the information about it — and it’s like, ‘Oh, well that was a typo. They just got put in there by accident. How many of those are typos?”

MORE NEWS: Recognize Taiwan And Tell The Chicoms To Lump It

It wasn’t just Bock, either. James Caruso, chief medical examiner, and coroner shared similar stories. “I was told by some of my fellow coroners in the more rural counties in Colorado that it was happening to them, that they knew of issues where they had signed out a death certificate with perhaps trauma involved. And they were being advised that it was being counted as a COVID-related death.”

Caruso added, “I think early on, the people signing the death certificates probably were doing it accurately. But at some level — maybe the state level, maybe the federal level — there’s a possibility that they were cross-referencing COVID tests. And that people who tested positive for COVID were listed as a COVID-related death, regardless of their true cause of death. And I believe that’s very erroneous and not the way the statistics needed to be accumulated.”

This piece was written by Jeremy Porter on September 19, 2021. It originally appeared in RedVoiceMedia.com and is used by permission.

Recognize Taiwan And Tell The Chicoms To Lump It

Gingrich Understands, Socialism Is A Racket