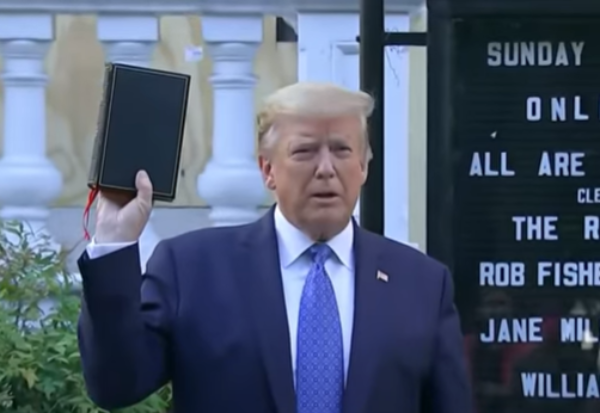 Protesters, resistance lawmakers, the media, and Joe Biden all used the incident at the time to portray the former President as a dictator [2], clearing the park of riff-raff so he could assert his authority.

The report by the department’s Inspector General indicates federal police officers cleared the park instead so a contractor could install fencing.

“That finding … is likely to surprise many critics of Trump, who have long asserted that the president or his attorney general ordered the operation to pave the way for an act of political theater,” NBC News reports.

Ken Dilanian, an NBC News correspondent covering national security and intelligence, provided an interesting spin on the false news narrative that was allowed to permeate for a full year.

“A narrative we thought we knew is not the reality,” he reported [3].

The Interior Dep’t Inspector General says police forced protesters from Lafayette Square last summer so contractors could install new fencing, not because Trump planned to visit. (This isn’t entirely consistent with what DOJ has been arguing in court recently.) pic.twitter.com/2fSwMzpNwM [4]

Former President Donald Trump celebrated news of the Interior Department report which cleared him of a leftist narrative meant to portray him as a tyrant.

“Thank you to the Department of the Interior Inspector General for completely and totally exonerating me in the clearing of Lafayette Park!” he said in a statement.

He added that federal police, as backed up by the report, had decided to install the additional fencing “to protect from Antifa rioters, radical BLM protestors, and other violent demonstrators who are causing chaos and death to our cities.”

Trump would also remind that the protesters at that time tried to burn down [9] St. John’s Episcopal Church.

“They tried burning down the church the day before the clearing,” he stated. “Fortunately, we were there to stop the fire from spreading beyond the basement — and it was our great honor and privilege to do so.”

Following the release of the Interior Department report on Lafayette Park, it would seem many critics of the former President owe him an apology.

House Speaker Nancy Pelosi and Senate Majority Leader Chuck Schumer at the time issued a joint statement condemning Trump specifically for posing for pictures with the Bible outside the church.

“At a time when our country cries out for unification, this President is ripping it apart,” they wrote. “Tear-gassing peaceful protestors without provocation just so that the President could pose for photos outside a church dishonors every value that faith teaches us.”

The President must immediately reopen Lafayette Square to the public.

This unique park should be a symbol of freedom & openness, not a militarized zone behind which President Trump cowers in fear of protesters who are crying out for justice. pic.twitter.com/xvsVjtfsO2 [12]

President Joe Biden also used the narrative to attack Donald Trump and curry favor with the protesters who had engaged in violence against park police and committed arson.

Biden would later slam Trump for the alleged Bible photo-op, saying the President at the time should read the book once in a while.

“The President held up the Bible at St. John’s Church yesterday,” said Biden. “I just hope he’d open it once in a while.”

Joe Biden: “The President held up the Bible at St. John’s Church yesterday. I just hope he’d open it once in a while.” pic.twitter.com/yorzAu83Qs [18]

If Biden cared to open up a Bible himself, he might take a look at Proverbs 10:9 which reads [20]:

“Whoever walks in integrity walks securely, but he who makes his ways crooked will be found out.”

Trump spent the entire time securely walking in the knowledge that he hadn’t acted as he was being portrayed. Biden, Pelosi, Schumer, and their media minions, however, just had their ‘crooked’ ways ‘found out.’

Some may be interested in granting the media credit for reporting on the Interior Department revelation and finally revealing the truth.

They deserve absolutely no credit.

Had this finding been released while Trump was still President, mainstream journalists would have buried it faster than the Hunter Biden text messages [23]. He is safely out of the White House now. That is the only reason this news came out.

The Lafayette Park/Trump Bible story is one of many that have fallen apart since the 2020 election.

The media actively buried stories on Hunter that have since proven true. They buried the Wuhan lab leak theory [24], which has since garnered further attention. The Russia bounty story, too, has fallen apart [25].

All of these lies had one ultimate goal in mind – remove Trump from office by convincing gullible voters to choose Biden over all of this evil.

Look at where that got you, America.
This piece originally appeared in ThePoliticalInsider.com [28] and is used by permission.