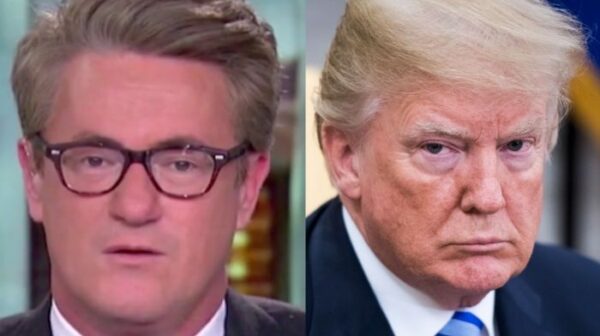 During Thursday’s episode of the MSNBC show “Morning Joe,” host Joe Scarborough ranted about the inspector general’s report that many say vindicated former President Donald Trump, as it shows that U.S. Park Police had already planned to secure the perimeter around the White House after violent attacks by rioters on law enforcement. This directly contradicted the media narrative that Trump had them use tear gas on “peaceful protesters” for a photo-op.

Scarborough, however, mocked the report, saying that the “panting and heavy breathing” from those touting the report is “laughable.”

“First of all, I’ve got to say I think I’ve been unduly tough on William Barr because I did not know all of this time, that not only was he operating as Attorney General of the United States of America, but he was also the director of scaffolding for Lafayette Park,” Scarborough said [1] as he reacted to the report. “Imagine that, having that as like your second job. You know, the headlines from some of our friends and the panting and heavy breathing after this IG report came out is laughable. The IG himself said this report is not dispositive. He said we can only handle what’s in our jurisdiction, and as he said, unfortunately, not everything is in our jurisdiction. What this report said was that they had planned to go out and fix the scaffolding for some time. They didn’t know that Donald Trump was coming out until later in the afternoon.”

“[T]here’s a reason they were cleared with the urgency that they were cleared with,” he continued. “Two things, again, my friends and young children, can be true at the same time. They could have actually scheduled repairs on scaffolding at the same time, before knowing, of course, that Donald Trump, who was humiliated after news broke that he scrambled down to the bunker — I don’t know why he was humiliated by that, but for some reason, he was deeply humiliated by that — but they had made these plans, and then Donald Trump and his aides made their plans that he was going to go across there. And again, the schedule could have been in place for a couple of days. Like, you can stop your panting. You can put down the paper bag. That really doesn’t prove anything.”

“But if it makes you feel better seizing on to a report that doesn’t cover the entire event and completely ignoring what the director of scaffolding for Lafayette Park said, you go with that, but that’s awfully thin gruel if that’s what you’re relying on — awfully thin gruel,” Scarborough concluded. “Good luck with that.”