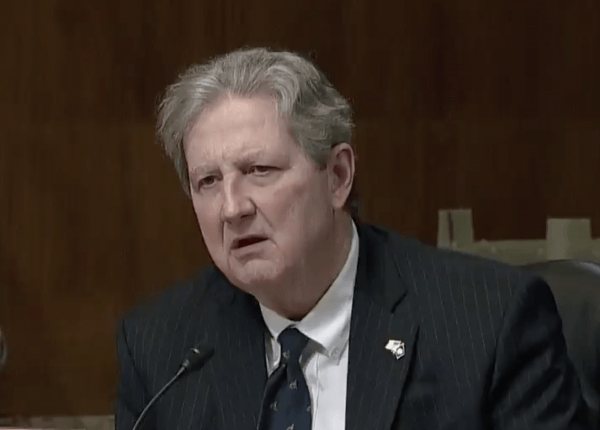 Senator John Kennedy joked that [1] Anthony Fauci might want to get himself an “emotional support pony” following complaints from the doctor that he and science are being attacked.

Kennedy made the remarks in an interview with Fox News personality Sean Hannity.

“This isn’t about Dr. Fauci. It’s not about his feelings, and I’m sorry if his feelings were hurt,” Kennedy continued. “You know, maybe he ought to buy an emotional support pony.”

“Dr. Fauci needs to cut the crap…I am sorry if his feelings were hurt. Maybe he ought to buy an emotional support pony… the American People are going to end up trusting Dr. Pepper more than Dr. Fauci.” pic.twitter.com/n3gt9fF2Ul [3]

Somebody may want to get the license plate of the truck that just flattened Fauci.

Kennedy’s remarks come following an interview on MSNBC where a clearly defensive [5] Fauci criticized any attacks on him as an ‘attack on science’ itself.

“People want to fire me or put me in jail for what I’ve done,” the White House chief medical adviser said. “Namely, follow the science.”

“Attacks on me, quite frankly, are attacks on science,” he continued. “All of the things I have spoken about, consistently, from the very beginning, have been fundamentally based on science. Sometimes those things were inconvenient truths for people.”

The attacks on Fauci aren’t an attack on science

They are an attack on hiding behind science to lie by omission pic.twitter.com/QWFj4Sl05x [6]

Fauci, the media darling of the pandemic, has found himself under increasing scrutiny after a theory that COVID-19 leaked from a lab in the province of Wuhan, China has gained traction.

Fauci frequently dismissed [8] the idea, though admits it is a possibility.

“That’s right, the “bat lady” of the Wuhan lab — the one who received funding via a U.S. contractor from Fauci’s National Institute of Allergy and Infectious Diseases — experimented with furin sites to make coronaviruses more infectious for humans.” https://t.co/wQKdE265UJ [9]

Newly released emails have shown Dr. Fauci’s evolving views, or as he calls it [11], going through the “scientific process,” on various topics, including the lab leak theory and the effectiveness of using masks during the pandemic.

In one email, he requests that a deputy review an attachment purportedly referencing Ralph Baric, a virologist based in the United States who collaborated with the Wuhan Institute of Virology.

Fauci had testified that Baric is not involved in ‘gain of function’ research. The file was labeled: “Baric, Shi, et al — Nature Medicine — SARS Gain of Function.pdf.”

Kennedy has clashed with Fauci on ‘gain of function’ research, asking the National Institute of Allergy and Infectious Diseases Director if it was possible grant money from the United States could have funded gain-of-function research in Wuhan.

“How do you know they didn’t lie to you and use the money for gain-of-function research anyway?” Kennedy asked during congressional testimony.

“How do you know that they didn’t do the research and not put it on their website?” he further inquired.

“There’s no way of guaranteeing that,” replied Fauci, “but in our experience with grantees, including Chinese grantees, which we have had interactions with for a very long period of time, they are very competent, trustworthy scientists.”

Dr. Fauci admits there is “no guaranteeing” that Chinese didn’t use funding for gain-of-function research.

KENNEDY: “So you don’t think the Chinese would lie to you?”

FAUCI: “I know the scientists we have dealt with have been trustworthy.” pic.twitter.com/iA0Hke3pNk [12]

Kennedy’s interview with Hannity featured other remarkable one-liners against Fauci.

“Since day one, Dr. Fauci and his expert friends have told us, look, the virus occurred naturally. It jumped from a bat to a host and then to human beings,” he carried on. “Well, it’s been a year. Where is the proof? Where is the smoking bat?”

Kennedy went on to say the information coming out is beginning to “undermine public health.”

“People’s confidence in public health, and the American people are going to end up trusting Dr. Pepper more than Dr. Fauci.”