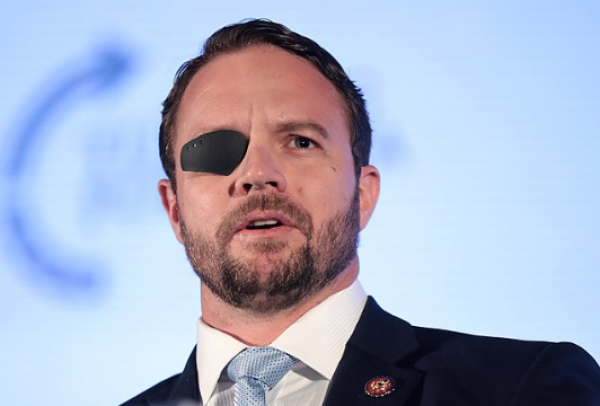 On Monday, Republican Congressman Dan Crenshaw had a war of words with his former Democratic opponent on social media after she made a passing remark about his eye.

Crenshaw lost an eye while serving America in combat.

The former Navy SEAL did not hesitate to respond in kind.

Poked her right back in the eye .https://t.co/BLvQCYkeXU [1]

Democrat Elisa Cardnell challenged Crenshaw for the House of Representatives in Texas’ Second Congressional District in 2020.

After Crenshaw recently called out Democratic Senator Elizabeth Warren for telling what he called a “blatant lie” on Twitter, Cardnell proceeded to remark on the Republican congressman’s eye, which was damaged by an exploding IED during his service in Afghanistan.

Screenshots of Cardnell’s original post was captured by The Daily Wire [3].

You cannot not find Cardnell’s jabs about Crenshaw’s eye on Twitter now because she changed her setting to private.

“The GOP has been singlemindedly chipping away at democracy for months,” Cardnell wrote. “The reason you can’t see the objective truth isn’t because of your eyes; it’s because of how far you have your nose up your Dear Leader’s a$$.”

Cardnell replied, saying that she “ran out of characters to say ‘eyes, or lack thereof.’”

“Bless your heart,” Crenshaw shot back at the Democrat. “Please pray for this woman.”

Bless your heart. Please pray for this woman. https://t.co/bkUdP6P0gr [6]

After losing one eye in Afghanistan, Crenshaw endured multiple surgeries to save his other eye.

Recently, the Republican congressman and veteran said he was taking a break from Twitter because he was losing vision in the remaining eye.

Crenshaw had to undergo another surgery to fix that health issue.

Dan Crenshaw gives an update on his eye after surgery.https://t.co/fu0KGTJxBy [8]

Crenshaw In May: ‘I Was Really Confronted With Permanent Blindness’

In mid-May, Crenshaw said [10], “Back in January, I had some flashes off to the corner of my vision.”

“Imagine looking at a screen too long and maybe some distortions associated with that … that blinking, that’s sort of what I saw,” he said.

Rep. Crenshaw added, “I was really confronted with permanent blindness this time because a retinal detachment is very, very dangerous.”

As to what’s underneath his eye patch, Crenshaw has a rather awesome surprise: