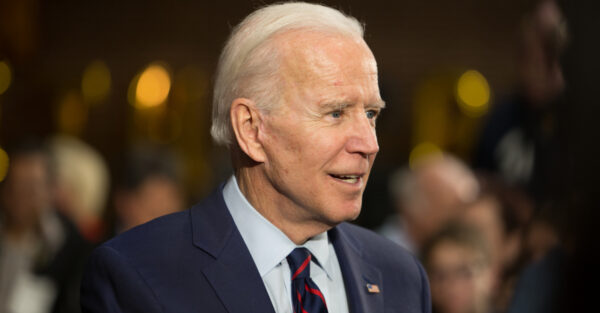 President Biden, during a speech [1] to Air Force personnel in the United Kingdom, warned that global warming is the “greatest threat” facing America and that it is “not a joke.”

The comments are an indication that the administration is shifting its focus from real and tangible enemies to those promoted by ‘science’ and the media.

Biden claimed he was told this by Pentagon officials when he was serving as Vice President in 2009.

“When I went over to the tank in the Pentagon when I was first was elected vice president with President Obama, the military sat us down and let us know what the greatest threats facing America were, the greatest physical threats,” he said.

“This is not a joke,” he insisted. “You know what the Joint Chiefs told us the greatest physical threat facing America was? Global warming.”

BIDEN: “This is not a joke. You what the Joint Chiefs told us the greatest threat facing America was? Global warming.” pic.twitter.com/apH7RtQWft [2]

Imagine being in the Air Force and finding out you may be stationed not in Iran, North Korea, or the Middle East, but instead, the ozone layer.

The Pentagon, just days after Biden was sworn into office, announced that they would be considering climate change and global warming when simulating war games.

“There is little about what the [Defense] Department does to defend the American people that is not affected by climate change,” Defense Secretary Lloyd Austin said in a statement [4]. “It is a national security issue, and we must treat it as such.”

Added Austin, “The Department will immediately take appropriate policy actions to prioritize climate change considerations in our activities and risk assessments, to mitigate this driver of insecurity.”

This is complete, unadulterated crap and every single member of the military will tell you it is. The Joint Chiefs never told him this. https://t.co/CEkun3aNzo [5]

I Thought the Biggest Threat Was ‘White Supremacy’?

Back in April, Biden was telling Americans that the greatest threat to American security was ‘white supremacy.’

“We won’t ignore what our own intelligence agencies have determined,” the President said during his address [7] to a Joint Session of Congress. “The most lethal terrorist threat to the homeland today is from white supremacist terrorism.”

Pres. Biden: “We won’t ignore what our intelligence agencies have determined to be the most lethal terrorist threat to our homeland today: White supremacy is terrorism.”

Meanwhile, President Biden and his administration continue to ignore an actual national security threat at the southern border.

U.S. Customs and Border Protection (CBP) said they encountered [12] over 180,000 illegal immigrants in the month of May alone. That marks the single highest recorded monthly total since April of 2000, over 20 years ago.

Joe Biden now claims global warming the greatest threat to America, last week it was “white supremacy” and before that it was disunity

While the border crisis is ongoing, America is learning that the COVID-19 pandemic may have originated in a Chinese lab and Russian hackers are shutting down pipelines [14].

But the Pentagon and the President want to sweep those issues under the rug and instead concentrate on global warming and white supremacy.

Contrary to what he told servicemembers, this is, in fact, a joke.

This piece originally appeared in ThePoliticalInsider.com [15] and is used by permission.