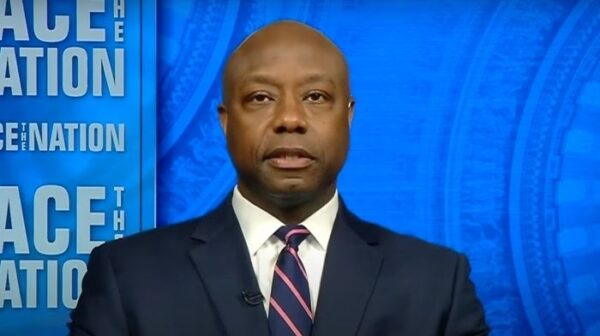 In a Facebook post, Gary O’Connor, chairman of the Lamar County Democratic Party, said that Scott is “little more than an oreo with no real principles”after the black Republican’s response to President Joe Biden’s nationwide address on Wednesday.

RELATED: Dem. Sen. Hirono Exposes Herself As Hypocrite On Filibuster – Admits She Supported It But It’s ‘A Vestige Of The Jim Crow Days’ [2]

“This is disgusting, hateful, and completely unacceptable,” Gov. Abbott tweeted. “O’Connor must apologize to @SenatorTimScott & step down immediately.”

This is disgusting, hateful, and completely unacceptable.

‘Oreo’ Is A Racist Slur

Abbott added that the Texas Democratic Party should “censure him” for using a racial slur.

According to the Urban Dictionary [7], “oreo” is a “Term for African Americans that the black community is generally offended with for betraying their roots usually for dating caucasian girls, dressing too white, talking too white, etc. The term is branded OREO since they are ‘Black on the outside, White on the inside.’”

Gary O’Connor’s comment against @SenatorTimScott [3] is abhorrent, insulting, and unforgivable.

Both he and the entire Lamar County Democratic Party should be ashamed of this racist behavior.

Sen. Scott: ‘We Need Policies And Progress That Bring Us Closer Together’

Fallon insisted that O’Connor to “apologize and step down immediately” and asked the Texas Democratic Party and the NAACP “to condemn these words.”

Sen. Scott himself called out Democrat hypocrisy on Wednesday when it comes to trying to “unite a nation.”

“He promised to unite a nation. To lower the temperature,” Scott said the GOP rebuttal. “To govern for all Americans, no matter how we voted.”

“That was the pitch. You just heard it again,” Scott said. “But our nation is starving for more than empty platitudes. We need policies and progress that bring us closer together.”

Scott also criticized those on the left that claim the U.S. is “a racist country.”

SEN. TIM SCOTT (R-SC): "Hear me clearly: America is not a racist country. It's backwards to fight discrimination with different types of discrimination.” pic.twitter.com/Abbfs4BZtq [12]

RELATED: ‘The View’ Derails As Meghan McCain And Joy Behar Go At It Over Biden Fist Bump – ‘The Left Is Just As Bad’ [14]

‘America Is Not A Racist Country’

“Hear me clearly: America is not a racist country,” Scott bellowed.

“It’s backwards to fight discrimination with different types of discrimination,” the senator added. “And it’s wrong to try to use our painful past to dishonestly shut down debates in the present.”

Now is the time to support and share the sources you trust.
The Political Insider ranks #16 on Feedspot’s [15] “Top 70 Conservative Political Blogs, Websites & Influencers in 2021.”

Read more at ThePoliticalInsider.com:
The Trojan Horse Presidency [17]
Report: Warrant Issued For Arrest Of Pastor Who Kicked COVID Police Out Of His Church [18]
Biden Interrupted By Protesters Demanding To Abolish ICE [19]