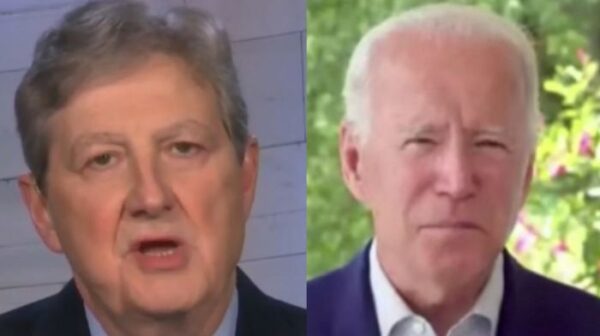 Kennedy expressed his belief that Biden is doing this to promote an infrastructure spending agenda.

“I don’t have a lot of details,” Kennedy said, referring to the visit. “It’s always an honor when a president visits your state. I’m sure the president’s coming in to say I’m the candy man, and I’ve got more free stuff for you. The problem is that there’s nothing free. Anything free somebody had to work for. The president’s plan is not an infrastructure plan. Only 5 percent of it goes to infrastructure. It’s really a Green New Deal and welfare plan, and it’s a mess. It looks like somebody — somebody knocked over a urine sample. Now, we can fix it if we stick to, A, infrastructure, and B, we have serious discussions about how to pay for it. I can tell you how we can pay for it.”

“We can reduce some of our spending,” he added. “We spend $144 billion a year on improper payments, including to dead people. We don’t have to give our federal employees a pay raise every year. We can repurpose some of the coronavirus money that we don’t need. We clearly aren’t in an economic crisis. I will give the president credit in one respect. I’m not for raising the corporate income tax, but there is a tax loophole, a special interest loophole, that I’m willing to talk with him about. It has to — I won’t bore you with the details, but it has to do with what’s called intellectual property and transfer of pricing.”

“I’ll give you an example,” Kennedy continued. “Coca-Cola just got tagged by a federal judge for $3 billion in back taxes for cheating on its taxes. And it did it by moving it — moving its recipe for its syrup to other low tax countries, like Ireland and others and some clever accounting, and they got caught. And I think a lot of multinational corporations do that. And I’m willing to sit down and talk with the president about how to close that loophole. I know it’s hard to believe that a company as — a CEO as virtuous as the CEO of Coca-Cola would do that. But nonetheless, he got caught.”