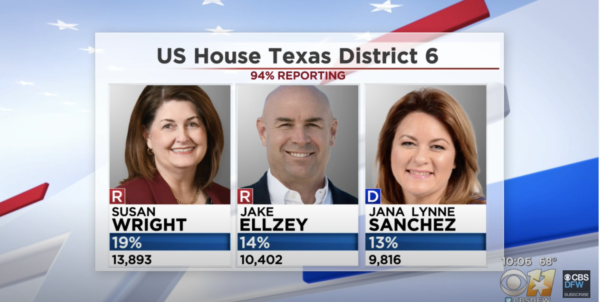 Democrats tried to flip a seat in Texas last weekend and were roundly thrashed, as Republicans took the two top spots in a 23 person runoff.

FNC: “Republicans Susan Wright, the wife of the late Republican Rep. Ron Wright, and Jake Ellzey advanced this weekend to a runoff election for Texas’ Sixth Congressional District, which many see as a bellwether for future contests. Ellzey defeated Democrat Jana Lynne Sanchez by less than 400 votes for the second runoff spot. The New York Times reported that the special election results disappointed Democrats who hoped for a better showing for Sanchez.

“The district, which covers some southeastern parts of Fort Worth, as well as some rural areas, is seen as the country’s first competitive contest since President Biden took office. Former President Donald Trump — who voiced his support of Wright — carried the district by 3 points in 2020. Four years earlier, he won by 12 points. As of Sunday, Wright received more than 19% of the votes. Candidates were required to get over 50% in order to avoid a runoff. There were 23 candidates on the ballot.”

Texas Democrats tried to spin it. “Democrats have come a long way toward competing in Texas but we still have a way to go,” Jana Sanchez, the defeated Democrat, said in a statement on Sunday. “Unfortunately, tonight we came up short, and two Republicans will be competing to represent this Congressional district.

Texas Democratic Party Chair Gilberto Hinojosa made a farcical statement after the loss. “The clear enthusiasm in this election is one more sign that Texas is moving closer and closer to turning blue with every year that passes. The new Democratic South is rising, and we will continue to rally our movement to take back our state — including as we look toward the 2022 governor’s race.”

The former president made the subject about himself. “The Democrats have just conceded the race,” Trump said in a statement. “Susan surged after I gave her an endorsement last week. Her wonderful husband is looking down, and is very proud of her!”

Susan Wright herself said, “It’s been challenging at times, but the work goes on and he would want me to do what he did which is engage with voters, hear what they have to say, and talk to them so that is what we are doing.”

This piece was written by David Kamioner on May 3, 2021. It originally appeared in DrewBerquist.com [4] and is used by permission.