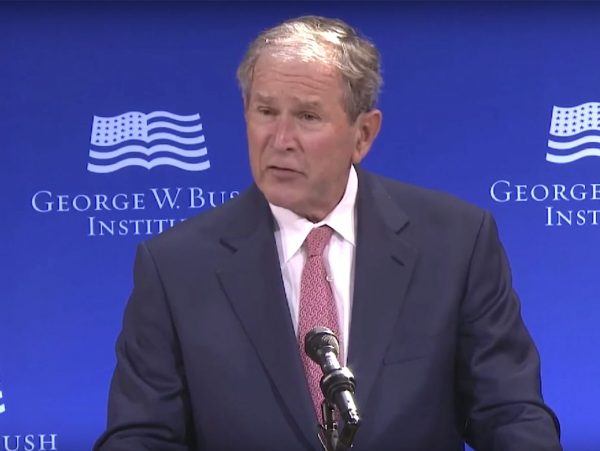 Former President George W. Bush took another swipe [1] at the Republican Party, saying if they fail to become a more inclusive party, they won’t “win anything.”

Bush made the comments during an interview on The Dispatch Podcast [2] last week, conducted by Sarah Isgur and Stephen F. Hayes.

Isgur inquired as to whether Bush felt he could remain a member of the Republican Party if certain elements continue to push purity tests in favor of “Anglo-Saxon traditions.”

Bush hinted that if that push continues “there’s not going to be a party” before expressing the need to embrace immigration.

“The idea of kind of saying you can only be Republican ‘if,’ then the ultimate extension of that is it ends up being a one-person party,” he claimed.

“If the Republican Party stands for exclusivity – it used to be country clubs, now evidently it’s White Anglo-Saxon Protestantism – then it’s not going to win anything.”
https://t.co/J0q3Ris50V [3]

It’s amusing to hear George W. Bush go after the Republican Party when the Democrat Party, during his entire two terms in office, cast him as a Nazi war criminal [6] if he didn’t adhere to their purity tests.

Hayes continued on the theme, suggesting there are elements in the GOP that are simply louder than the moderates and that “they were talking about starting a caucus.”

Hayes’ comments were referring to an ‘America First’ caucus that had been [7] the brainchild of Rep. Marjorie Taylor Greene (R-GA) before being scrapped.

“You know, to me that basically says that we want to be extinct,” Bush replied.

Former President George W. Bush on parts of the GOP leaning into nativism: “To me, that basically says that we want to be extinct.”https://t.co/AhlGRAxQZB [8] pic.twitter.com/gQmlU9VFlA [9]

Hayes asked Bush if he was in the “50% of Republicans across the country” who believe the 2020 election was stolen.

Watching George W. Bush transform from the media’s most hated figure to their darling has been one of the more disgusting things in the past 20 years.

‘Not Going to Win Anything’

Bush said he is a ‘proud’ member of the Republican Party, but issued a stark warning.

“I know this,” he told Hayes, “that if the Republican Party stands for exclusivity, you know, used to be country clubs, now evidently it’s white Anglo-Saxon Protestantism, then it’s not going to win anything.”

How would you describe the Republican Party today? –@hodakotb [13]

I would describe it as isolationist, protectionist, and to a certain extent, nativist. -Former President George W. Bush pic.twitter.com/tyFl2LnRMP [14]

George W. Bush took some heat a couple of weeks back during a Today show interview in which he criticized [16] today’s GOP and former President Donald Trump.

In that interview, Bush took aim at Republicans who he described as “isolationist, protectionist, and to a certain extent, nativist.”

Bush further suggested he would support a moderate candidate with pro-gun control and pro-amnesty views in 2024.

“Bush remained hopeful that a more moderate Republican — one who supported reasonable gun reform measures, increased public school funding and a path to citizenship for undocumented workers, among other policies — could succeed in the party’s 2024 presidential primary.”

If he were truly concerned about uniting around a common cause, he’d be pushing the conservative values that actually define the Republican Party.

Not appearing on friendly media outlets where they gleefully listen to his attacks on Trump and his supporters. It’s getting to a point where Bush might as well change his last name to McCain.