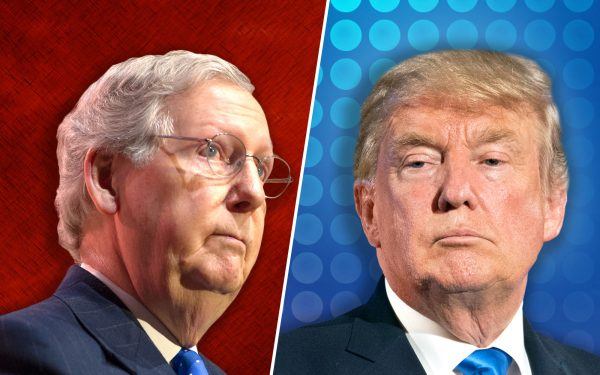 Senate Minority Leader Mitch McConnell, according to a report in The Hill [1], is seeking to bury “his running feud with President Trump.”

In a discussion with reporters, McConnell (R-KY) expressed no interest in addressing fiery comments by the former President and instead is seeking to unify the Republican Party.

“What I’m concentrating on is the future and what we are confronted with here is a totally left-wing administration, with a slight majority in the House, a 50-50 Senate trying to transform America into something no one voted for last year,” he said.

“Right now, it’s sort of a one-sided thing. The leader has no animosity and he’s made it very clear he wants to work with the president to get the majority back,” said Thune.

McConnell’s neutral stance is a far cry from early January when he was blaming Trump for the Capitol riots and expressing support for impeachment, comments which kicked the feud into high gear.

McConnell, according to a Fox News report [6] at the time, “told associates that impeachment will help rid the Republican Party of Trump and his movement.”

Trump ravaged the GOP leader for echoing Democrat comments about the riot, issuing a statement saying [7] McConnell is “a dour, sullen and unsmiling political hack.”

“The Republican Party can never again be respected or strong with political ‘leaders’ like Sen. Mitch McConnell at its helm,” he added.

Trump slammed McConnell again during a speech [8] at Mar-a-Lago this past weekend, describing him as a “dumb son of a bitch” and a “stone-cold loser.”

McConnell and Thune, though, weren’t taking the bait.

FOX NEWS: At a closed-door Mar-a-Lago speech last night, Trump called McConnell a “dumb son of a b*tch” and a “loser” for not doing enough to defend him during the Feb. impeachment trial

Raise your hand ✋if you agree with President Trump

RELATED: Mitch McConnell Says He Would Back Trump in 2024 if He Wins GOP Nomination [10]

Is The Establishment Coming Around?

Is McConnell’s efforts to bury the feud between him and Trump a sign of an America First unity tour heading into the 2022 and 2024 elections?

Another member of the establishment wing of the GOP, Nikki Haley, seems to have done an about-face on her criticism of Donald Trump.

After originally saying Trump can’t run for federal office ever again because he’d “fallen so far,” Haley hinted she would support him by bowing out in 2024 if he decides to run.

JUST IN: Nikki Haley says she will not run if Trump runs for president in 2024 https://t.co/YLXEiRsiqZ [11] pic.twitter.com/pZ6zeXoIUX [12]

“I would not run if President Trump ran, and I would talk to him about it,” Haley told reporters.

McConnell, since his comments in January, has indicated he would “absolutely” back Trump [14] in 2024 should he win the Republican Party nomination.

Perhaps the polls are the true reason Haley and McConnell want to end their feud with Trump.

Now is the time to support and share the sources you trust.
The Political Insider ranks #16 on Feedspot’s [16] “Top 70 Conservative Political Blogs, Websites & Influencers in 2021.”