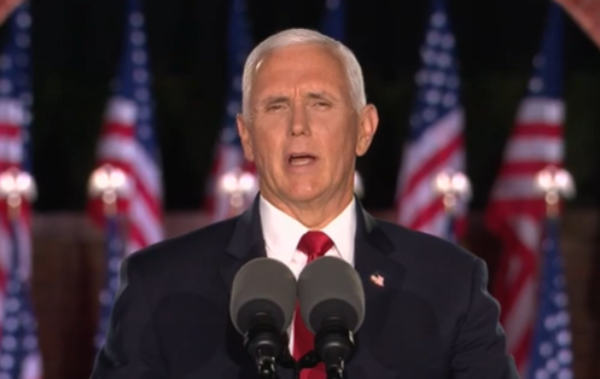 This, combined with a new book deal [2], has left some wondering if this is Pence positioning himself for a 2024 presidential bid.

Excited to launch @AmericanFreedom [3], an advocacy organization that will defend and build upon the successful policies of the Trump-Pence Administration. AAF will help defeat the Radical Left Agenda and Advance American Freedom for generations to come! 🇺🇸 https://t.co/tnR04lTCXb [4]

Pence On Group’s Mission: ‘Conservatives Will Not Stand Idly By’

According to The Washington Examiner [7] Pence’s new group will be called “Advancing American Freedom” and will operate as a 501(c)(4) nonprofit with the mission of defending the Trump-Pence record while also holding together the Republican coalition that put Trump in the White House.

Pence and others want that coalition to have more victories in the future.

Headquartered in Washington, D.C., the new organization will build a platform of what they see as the “three pillars” of American principles: strength and security, prosperity, and liberty.

Pence told the Examiner in a statement, “Advancing American Freedom plans to build on the success of the last four years by promoting traditional conservative values and promoting the successful policies of the Trump administration.”

“Conservatives will not stand idly by as the radical left and the new administration attempt to threaten America’s standing as the greatest nation in the world with their destructive policies,” the former vice president added.

According to the Examiner, the advisory board of Advancing American Freedom will feature high profile Trump administration alumni, including former senior counselor to the president Kellyanne Conway and former director of the National Economic Council Larry Kudlow.

“Other members of the advisory board include Trump’s director of the Office of Management and Budget Russ Vought, former Wisconsin Gov. Scott Walker, and former Ambassador to Israel David Friedman. Chip Saltsman, Marc Short, and Marty Obst will be co-chairs,” the Examiner reported.

The group’s executive director will reportedly be Paul Teller, the former director of strategic initiatives for Vice President Pence.

Teller has been a key figure for conservatives, serving as Chief of Staff for the Republican Study Committee at the beginning of the tea party revolution. The Committee, or RSC, is a caucus of conservatives in the House of Representatives.

Again, this effort has Trump’s support. The former president told the Examiner his term in office was “the most successful first term in American history.”

“Nice to see Mike highlighting some of our many achievements,” added Trump in a statement given to the Examiner.

But what do these moves mean for Pence and his potential political future?

Pence is no stranger to the conservative movement and its longstanding institutions, including recently joining the Heritage Foundation [10] as a distinguished fellow and Young America’s Foundation [11] as the Ronald Reagan Presidential Scholar.

Some Pence aides have reportedly said that Pence is uniquely positioned to be a bridge between the older, already existing conservative movement and the pro-Trump MAGA voters who might not even identify as conservatives.

One aide told the Examiner, “There’s no doubt when the vice president joined the ticket in 2016, there was a whole new voter that Donald Trump brought in with his focus on China and trade, and he won over a lot of blue-collar votes in the Midwest.”

“This organization will focus on those winning policies that were at the center of that fusion between traditional conservatism and Trumpism,” the aide added, according to the outlet.

While the announcement of this new group not surprisingly led to speculation about whether or not Pence has designs on the White House in 2024, the aides insisted the organization’s founding is mostly a defense against the Biden administration’s attempts to dismantle Trump’s policies.

Pence may have an uphill to a 2024 nomination. The Political Insider’s 2024 poll shows Pence in last place out of six choices.