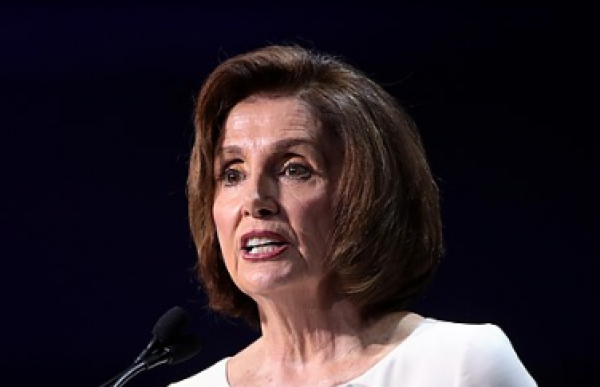 Speaker of the House Nancy Pelosi says she will not bring a court-packing bill introduced on Thursday [1] to the House floor for a vote.

Pelosi said of the proposed legislation,“I have no intention to bring it to the floor.”

Pelosi did say that she favors President Joe Biden’s recent call to form a commission to “study” possible expansion of the Supreme Court.

“I don’t know that that’s a good idea or a bad idea. I think it’s an idea that should be considered,” Pelosi said. She added, “It’s not out of the question.”

Opposition On The Left To Court-Packing

Since the death of Justice Ruth Bader Ginsburg last year and the GOP-led Senate confirmation Justice Amy Coney Barrett to replace her, liberal Democrats have openly toyed with the idea of adding justices to the court.

Ginsburg herself said [6] she thought packing the court was a bad idea.

As a Senator in 1983, Biden called FDR’s attempt to pack the court “a bonehead idea,” but now as President, he’s open to discussing the idea, as his commission proves.

Other Democrat lawmakers were not on board with the legislation [2] either.

Senate Majority Whip Dick Durbin (D-IL) stated, “I’m not ready to sign on yet.” He agreed with Pelosi on the President forming the commission.

Rep. Tom Suozzi (D-NY) blasted the legislation and stated, “This is a system that has worked well for a long time. Changing it based on party control is not a good practice.”

"It was a terrible, terrible mistake to make, and it put in question there for an entire decade the independence of THE most significant body… in this country." pic.twitter.com/MEPu0fMRG4 [8]

The Possible Reason Behind Pelosi’s Emphatic ‘No’

During her weekly press conference, when asked about the legislation, Pelosi gave a resounding “no.”

The reason might be that Pelosi does not have the votes [1] in the House.

With the slimmest margin of 218-212, she can only afford to lose two Democrats on any given bill.

Rep. Johnson says that there is [11] “significant support” already for the bill on the Democrat side of the aisle. He added, “But the issue has not been brought to the forefront.”

The Senate is a whole different scenario.

Many Senators, including Democrats, are opposed [11] to the bill.

Senate Democrats would have to do away with the filibuster if the bill has any chance of passing the Senate.

Sens. Joe Manchin (D-WV) and Kyrsten Sinema (D-AZ) have both said they are not in favor of discontinuing the filibuster.

Sen. Diane Feinstein (D-CA) has not been a firm yes or no on the filibuster, but has said that she prefer it be kept in place.

More Evidence Of A Democrat Split

The fact that all Democrats have not immediately jumped aboard the court packing train could be still more evidence of a substantial split within the Democrat Party. The court-packing legislation is no doubt a shove [1] from the left wing of the party.

Since November, Nancy Pelosi has had to deal with [15] new “Squad” members like Cori Bush (D-MO), while the existing members didn’t seem to listen to her prior to the election.

Georgetown University Law Professor Jonathan Turley may have diagnosed the problem that Nancy Pelosi and Joe Biden share, that the radicals are going around [6] both of them. “The have decided not to wait for the commission,” Turley said.

The reported bill leaves bare the true motivation of court packing. It is as subtle and elegant as a B-52. It leaves the Court composition as little more than a glorified FCC with life tenure. https://t.co/nSaxGPUkA3 [16]

Now is the time to support and share the sources you trust.
The Political Insider ranks #16 on Feedspot’s [18] “Top 70 Conservative Political Blogs, Websites & Influencers in 2021.”

This piece originally appeared in ThePoliticalInsider.com [19] and is used by permission.