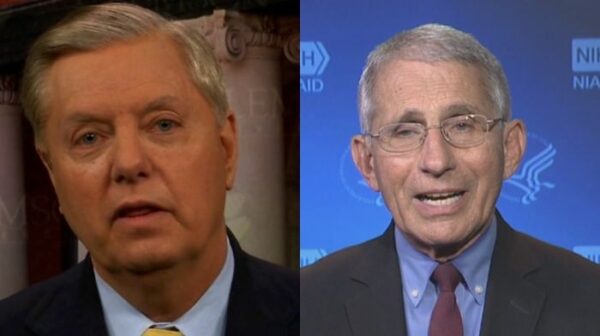 While appearing on Laura Ingraham’s Fox News show on Thursday night, Senator Lindsey Graham (R-SC) called on White House Chief Medical Adviser Dr. Anthony Fauci to visit the border, adding that if he’s “not compelled to shut down this illegal immigration program, I don’t want to hear anything you’ve got to say about baseball or restaurants.”

“Well, President Biden said to the Texas Ranger[s] baseball team…you need to listen to Dr. Fauci about urging people to come to the baseball game, Opening Day,” Graham said. “Dr. Fauci, you need to go to the border. And here’s what you will see: You will see 900 people in a room built for 80. You will see people living on top of each other, a 10% positive rate, where the positive people are intermingled with everybody else, and all these illegal immigrants are dumped off in Texas and the rest of the country.”

“So, Dr. Fauci, you need to go to the border, and if you’re not compelled to shut down this illegal immigration program, I don’t want to hear anything you’ve got to say about baseball or restaurants,” he added. “It is the biggest, in my view, COVID spreader in the world along the border, where thousands of illegal immigrants are coming to this country, positive, 10% positive rate, intermingled with each other, dropped out all over Texas and the rest of America. So, I’m not worried about the baseball game in Texas. I’m worried about illegal immigrants infecting the whole country given the policies that Biden has.”

This comes after Senator Rand Paul (R-KY) also made similar comments criticizing Fauci in his own interview with Ingraham last month.

“Senator, you have been one of the few lawmakers to directly call out Dr. Fauci lies,” Ingraham said [1]. “Are people afraid to question him? And if so, why?”

“Well, it’s the science — and people are afraid of, you know, scientists, and he’s put on a pedestal,” Paul replied. “But you have to remember that his lies are noble lies, Laura. He’s not telling you this because he’s a mean man.”

“He’s telling you this because he feels sorry for you because you don’t understand, and Americans aren’t smart enough to make an informed decision,” he continued. “So, he fashions himself some sort of Greek philosopher. He tells you these noble lies.”