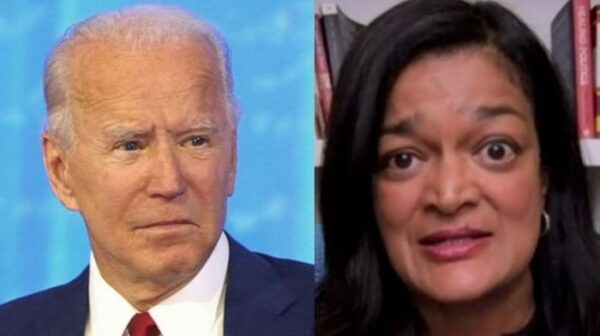 Congressional Progressive Caucus Chair Pramila Jayapal (D-WA) went on CNN on Friday to tell host Chris Cuomo that President Joe Biden “said in February that he was going to lift the refugee cap, and I believe that he needs to do that right now.” And shot back at host Chris Cuomo for starting the interview by asking about Rep. Marjorie Taylor Greene (R-GA) by stating, “I don’t care about Marjorie Taylor Greene. If you all on TV want to talk about her, that’s fine, but that’s not my concern.”

Cuomo then asked Jayapal about Greene.

“Well, Chris, you know, I have not tweeted or talked about Marjorie Taylor Greene in more than a month,” she replied. [1] “I came on your show to talk about the refugee cap, about shots in arms, about kids in schools, about getting people into jobs. I am not wasting one minute of time on Marjorie Taylor Greene. Because what she is doing is disgusting, but it is a reflection of what the Republican Party has become.”

“The fact that not a single Republican was able to vote for the American Rescue Plan that 70% of the country supported is a travesty, but that is what the Republican Party has become,” she added. “So what are we doing about it as Democrats? We’re passing a rescue plan that has 76% approval across the country. We are getting shots in arms. We are getting kids back in schools. We are helping small businesses. We’re going to pass a giant jobs bill to put people back to work. And we are going to make sure that we open our refugee assistance program again.”

‘Because, as even evangelicals have said, it is the crown jewel of American humanitarianism,” Jayapal continued. “And so, that’s what I’ve been concerned with today. I don’t care about Marjorie Taylor Greene. If you all on TV want to talk about her, that’s fine, but that’s not my concern. And that’s really — the fact that Kevin McCarthy is not even interested in decrying it is — that’s just what the Republican Party is today.”

“Trump left us with a mess on immigration. … So, is it going to take the Biden administration some time to get that all in place? Yes, it is,” she concluded. “Is it — are there things that they could do better and faster? Yes, there are. We outlined them already. But I wanted to talk about the refugee cap. … I’ve been tough on the president on this. I don’t think he should have changed. He said in February that he was going to lift the refugee cap, and I believe that he needs to do that right now.”