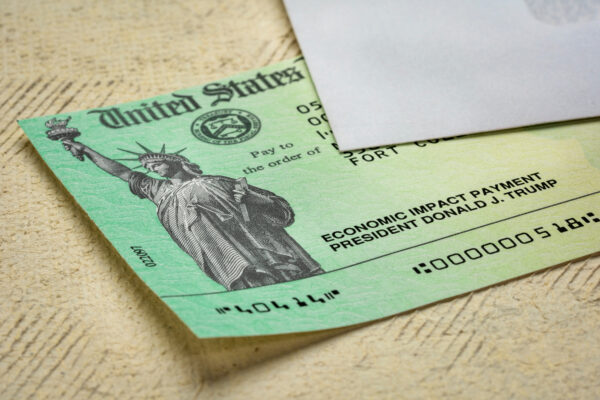 The Senate has reached an agreement with President Joe Biden that would lower the income limits [1] required to receive a $1400 coronavirus stimulus check.

The bill keeps in place the extra $400 a week in unemployment payments [2] through August.

Sen Joe Manchin (D-WV) had tried to get the extra weekly payments down to $300 a week.

Democrat Reactions To The Agreement

While Sen. Manchin did not get the unemployment reductions, he says he approves of the changes [2]. “It’s going to be a good package that’s going to help an awful lot of people. And it’s targeted. The main thing is, it’s targeted to get to people in need.”

Speaker of the House Nancy Pelosi (D-CA) was positive about the deal. “We’re interested in seeing the total package when it comes over. So far, so good.”

“This is an American wish list. When people want checks to help them get out of the morass, that’s not a liberal wish list. That’s what the American people want.” Schumer promoted the bill’s bipartisanship by referring to provisions in the bill put in by Republicans like Sen. Rob Portman (R-OH) and moderate Democrats like Kyrsten Sinema (D-AZ).

There may yet be one Senator throwing a wrench in the works.

According to CNN, Vermont Sen. Bernie Sanders (I-VT) plans to introduce an amendment that would raise the federal minimum wage to $15 an hour. The wage hike has already been struck down by the Senate Parliamentarian [6] for violating budgetary reconciliation rules.

Some Democrats feel like Sanders will be causing a bit of strife.

One Democrat aide says that “Sanders has created the most difficult vote for Democrats.”

This week, as part of the reconciliation bill, I will be offering an amendment to raise the minimum wage to $15 an hour.

With the passing of the $1.9 trillion package very likely, GOP leaders are urging all Republicans to unanimously oppose it. With that much opposition, it could be a painful time for Democrats.

A separate Politico report reveals that Senate Republicans are considering [9] whether to engage in a “vote-a-rama” of unlimited amendments, in an effort to get Democrats on the record for individual provisions of the bill.

“I’m hoping for infinity. There are people talking about setting up a schedule and having it go on and on,” said Sen. Rand Paul (R-KY).

A CNN report says that several GOP members and aides [10] say that the plan is to try to “peel off some Democrat members on a few key amendment votes to demonstrate differences among Democratic ranks, as well as create some ripe-for-campaign moments that can be made into political ads later on.”

Senate Dems are on the verge of passing Biden’s $1.9T stimulus bill, with GOP leaders urging their members to unanimously oppose it. But Republicans are still debating how painful to make things for Democrats. https://t.co/h4pq2h4PWe [11] pic.twitter.com/taUbtvDjnE [12]

RELATED: Job Creation, Not A $15 Minimum Wage, Will Reduce Poverty [14]

A Usual Suspect And A Bit Of Honesty

Sen. Lisa Murkowski (R-AK) says she is not yet a definite “no” [2] on the package: “I can’t stand that after any of this stuff we moved to last year that we are considering $1.9 trillion much of which is not specifically focused on Covid relief. But I’m coming from a state where people are saying: we need some help Lisa. And we want to know how you can.”

“It’s all about TV commercials. make people accountable for their votes. There is not much they can do if they are determined to hang together there is nothing we can do to change the outcome. If they really want to do this, they can probably get it done,” Cornyn claimed.

A new CNN report says that Senate Republicans plan to force a full reading of the bill that could take 10 hours. Senator Paul may get his wish.

Senate Republicans plan to force a full reading of the Covid relief bill — and it could take 10 hours https://t.co/075T8CkYDM [17]

Now is the time to support and share the sources you trust.
The Political Insider ranks #16 on Feedspot’s [19] “Top 70 Conservative Political Blogs, Websites & Influencers in 2021.”

This piece originally appeared in ThePoliticalInsider.com [20] and is used by permission.