Just because they care.

Perhaps the worst thing about last year’s election and the continuing Democrat message is their sanctimonious moral superiority. The Republicans are the evil party, you see. But the Democrats, well, they are the party of love, caring, and fuzzy kittens.

Because they have the media as an accomplice, the most corrupt and ineffective political party in American history is portrayed as a guileless angel as compared to the Trump administration, that haven of robber barons, thuggish misogynists, and deadly imperialists. One problem, the fascist warmongers in the Trump administration made a successful effort not to get this country into any new wars while at the same time keeping America safe.

But that was described as somehow heartless and racist by the media and Democrats. The Democrats would, once in office, bring the eternal light of hippie PC love to our relations with the world. Yes, it was a new day dawning on January 20th. No more bombing the world into submission as Trump did, though Trump did no such thing. Then last week, less than two months into this reign of hope and peace, Biden bombs Syria. But only in the nicest way. 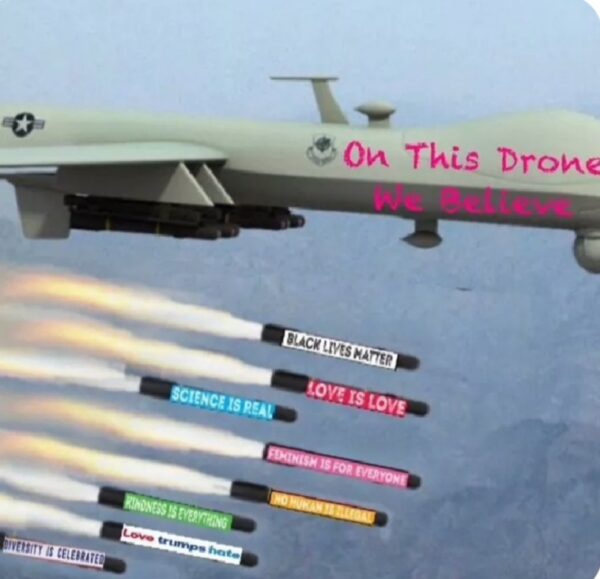 Not only have they not changed certain Republican policies, but mimicked them. Though they picked the wrong administration to serve as an example. If they had said, “Well, we’re kinda partial to Bush the Younger when it comes to our Middle Eastern approach.” We might laugh out loud, but they’d get points for candor.

Now you’re saying, “Bush was an amiable doofus, but he wasn’t surrounded by Marxists and antisemites like Biden.” Fair enough. But as opposed to Trump, who actually achieved very constructive things on the diplomatic front in the region without blowing the joint to hell, Bush operated on the faulty assumption the more American bombs that drop the better. Empirically, not quite.

The area, aside from Israel, is a cauldron of dark ages theology and blowhard dictatorships. The only actions that remotely serve American interests are to aid Israel, as an ally and intelligence partner, and keeping the oil flowing to the Free World by protecting the Persian Gulf. Hence, the 5th Fleet in Bahrain.

That’s exactly what Trump did. He worked out peace deals between Israel and neighboring Arab states and no one dared threaten the Gulf on his watch. However, that apparently is not good enough for Biden. He seems to want to again propel this country, just as Bush the Younger, into the quagmire of Middle Eastern combat by, LBJ-like, ordering airstrikes from the White House. Okay, maybe Harris ordered them. But you’re hip to the general picture.

So the party of love, rainbows, and sprinkles on cupcakes, the My Little Pony Democrats, aren’t so different from the supposed “Bush lied-People died” Republicans. Plus ca change, plus c’est la meme chose.

CNN’s Christiane Amanpour Claims Abortion Ruling Will Cause Taliban Not To Respect U.S.